ALMOST one in four (22%) British families eat dinner on their laps in front of the TV every day of the week a study shows. Just half (51%) enjoy a family meal at the dinner table and one in ten (11%) parents admit to letting children under 14 eat alone in their rooms.

While 86% of parents believe it’s important to eat dinner as a family, just two in five (41%) say they eat together every night. When it comes to cities – Bristol seems to enjoy eating together at the dinner table the most (72%) while Manchester tends to love their TV dinners (39%)! The survey of 2,000 parents of children under 14 by Scandinavian nursery brand, Stokke, also found that over two thirds (68%) of British parents confess they use their phones or a tablet to keep a child quiet at the dinner table.

However, it seems to be a case of the pot calling the kettle black as while parents seem relaxed about keeping their phones on the dinner table, over four fifths (82%) say they get annoyed with another family member who does it, with 83% of Dads saying so and 80% of Mums! Even worse – over two thirds (67%) of parents admit to spending too much time on their phones instead of focusing on their child.  With the main aim of encouraging families to sit together, Scandinavian designer, Peter Opsvik created the Stokke Tripp Trapp, the hugely popular, iconic high chair that grows with your child as they get older and brings them closer to the table.

Stine Brogaard, from Stokke says: “Eating together as a family is so important and however tempting it might be to have a phone or tablet there to entertain your child, it’s important for parents to take the time to talk to their little one, educate them on their food and chat at this special time of day. With work commitments, it’s often so difficult for parents to get that time to spend with their children so, no matter how old, from babies to teenagers – make an effort to talk about things, have a joke and listen!”

Stokke is the leading baby brand in Scandinavia.  Stokke’s ethos is to nurture family bonding, having your baby closer to you and the importance of eye contact.  The first product for children was launched in 1972 and since then the iconic Tripp Trapp® highchair has since sold more than 10 million worldwide.

Charlotte Stirling-Reed BSc, MSc, RNutr. is a specialist in baby and children nutrition for Stokke.  Here are her expert tips on how to enjoy a healthy and happy mealtime: The idea of eating together as a family for every meal will probably seem unrealistic for most of us. However, whenever we can, it’s really worthwhile making the most of time together eating as infants and toddlers pick up so much about what to eat and how to eat from watching us and others around them at mealtimes.

I love the idea of family mealtimes, whenever possible. Even if this just means mum or dad sitting down with baby or grandparents joining children at the table while they eat after school. It all can make a big impact on the enjoyment of mealtimes.

With that in mind, here are my 10 Top Tips to happy, healthy family mealtimes:

1.) Eat together, whenever possible! Make the most of family time around the table and try to sit together to eat whenever possible. Even if it’s just you and your baby/child, having you being a part of their mealtime can make such a difference to their experience and even how much they enjoy it.

2.) Get them involved – I love the idea of bringing baby into the mealtime and right up to the table as early as possible. Get them involved in food by surrounding them by everyone else tiucking into a delicious meal. Children learn the skills of eating, social skills and even WHAT foods they enjoy by first copying others. For older children, get them involved in prepping, shopping or even choosing what’s on the table at dinner times.

3.) Eat similar foods, regularly – Rather than serving separate meals for everyone in the family, try and have one option that everyone tucks into – as much as possible. Even if you’re offering similar options such as gluten free pasta, dairy free cheese etc, it’s good for your little ones to see you eating similar foods (including all those veggies) to encourage them to eat a wide variety themselves.

4.) Establish a routine – Having a routine around when meals are served can help get little ones ready for food, especially for infants, who tend to like more set routines. Establishing a “pre eating” routine can also help to get children involved and get them excited about mealtimes too. It might be clearing away toys, laying the table, playing some music or starting with a little game, which helps to set the tone for the rest of the meal & get everyone talking and excited for what’s to come.

5.) Try and make it distraction free – Distractions, including toys, TV, phones, can take away from the concept of food and meals being important. They also distract from what can be a really vital, social occasion for a family too. However, if we want little ones to grow up to love their food, we need to show them that the delicious, varied foods you put in front of them each day are worth their attention and time. So, try clearing away, switching off distractions and just focusing on you, them and that delicious bowl of food!

6.) Take the pressure off and leave out the rules – That said, making mealtimes too pressured and setting mealtime rules such as clearing the plate, eating veggies first, sitting down until everyone has finished can end up making mealtimes pressured and less enjoyable for kiddies. Stick to rules that you think are 100% necessary and avoid too much pressure for children to “eat up” a specific part, or all of their meal. It’s good to keep mealtimes light and enjoyable to help children WANT to be a part of them.

7.) Give them some choice – Offering choices between A and B can really help give your little ones some autonomy when it comes to food choices. It’s a form of covert parenting that allows you to still have the ultimate control of what’s offered, but it gives them some independence and allows them to feel like you’re also valuing their opinions too. This can also help with fussy eaters. An example might be “do you want that with potato or pasta today?” “Do you want peas or carrots on the side?”

8.) Try sharing patters – I love the Mediterranean style of sharing platters for mealtimes too, offering an array of foods, and allowing everyone to help themselves to whatever parts of the meal they want. This might not always work, but if you allow them to have their independence WHILST also role modelling and showing how you, yourself, have a wide variety on your own plate, they are likely to pick up some tips and eating habit just from watching you!

9.) Vary what’s on offer – One of the biggest reasons I see for children going off food is boredom. It’s SO easy to get somewhat stuck offering the same foods each week, but by offering a really wide variety, not only are you exposing your children to a variety of tastes and flavours and nutrients, you’re also preventing them getting fed up with the same meals over and over again. Totally aware this one is easier said than done, but try making some bulk meals at the weekend and then tapping into them where possible during the week. Menu plans can really work for some families too.

10.) Make it fun – Just try to relax, stay calm and make those mealtimes enjoyable for everyone. Again, this is easier said than done, but once you step back, take away some of the rules and start enjoying the social time with your little ones, it’ll become so much easier to make the occasion fun and enjoyable for everyone else too. Try using colourful napkins, tablecloths or even a beautiful bowl of fruits and veggies to keep it vibrant or play some calming music in the background to set the scene. What works will differ from family to family, so have a play with some ideas that make you and yours happy, and see what works! 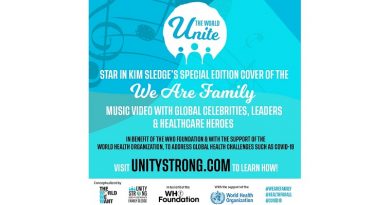 Cover Of “We Are Family” Released In Support Of WHO Foundation!