England star Raheem Sterling will be part of a Premier League campaign to combat racism this weekend.

It is understood the Manchester City star, who was among the England players racially abused during Monday night’s Euro 2020 qualifier against Bulgaria in Sofia, will feature in a video connected to the league’s ‘No Room for Racism’ campaign.

Bournemouth forward Callum Wilson and Everton goalkeeper Jordan Pickford, who also featured in the match, are also involved in promotional material which will be broadcast on stadium big screens over the next two weekends of Premier League action, along with unused substitutes Trent Alexander-Arnold of Liverpool and Chelsea’s Tammy Abraham.

Tottenham’s Son Heung-min and Norwich’s Teemu Pukki are also involved in the initiative.

Masters was watching on television at home as sections of the Bulgarian support racially abused England’s black players and performed Nazi salutes.

The initiative was always due to happen now and the timing has nothing to do with events in Sofia, but Masters admits it has given the campaign some added impetus.

“I couldn’t quite believe what I was seeing, I did watch it,” he said.

“I can’t recall ever seeing anything like that before. Clearly you had an organised group of people making Nazi salutes and monkey chants, visible to anyone who was watching the television feed.

“And then the (first step of UEFA’s anti-racism) protocol being activated, and then (supporters) streaming out, seemingly nonchalant to the impact they were having, I thought it was terrible.

“I thought that ITV, the players, Gareth and the FA dealt with it in an exemplary fashion.”

No Room For Racism involves the Premier League, the Football Association, the EFL, the Professional Footballers’ Association and anti-racism campaign group Kick It Out.

The Premier League is working to help make reporting of discriminatory behaviour easier, and is developing training for stewards to respond to such reports effectively.

One of the major issues this season from a domestic point of view has been the abuse directed at Premier League players, such as Abraham, Marcus Rashford and Paul Pogba, on social media.

Masters insists discussions are ongoing with Twitter and says the social media giant is “really trying” to stamp down on racist abuse on the platform.

He added: “Our fans share the belief that racism has no place in football or wider society, but discrimination still exists among a minority.

“We will not tolerate racism in any form and urge anybody who witnesses racist behaviour to report it.”

Kick It Out pledged its support to the initiative and will continue to run its own campaigns independently.

A Kick It Out spokesman told the PA news agency: “We’re pleased to see the Premier League continue their work to tackle racism in football through their No Room For Racism campaign, which includes a commitment to promoting reporting methods such as the Kick It Out app.

“Kick It Out works closely with the Premier League, as well as the EFL, the FA and PFA, and as such will always support their efforts to make football a more inclusive place for all.

“As an independent charity, we will continue to run our own campaigns to tackle all forms of discrimination and throughout this season, professional clubs in England will once again be dedicating a fixture to our work under the theme of our new #KickItOutGeneration campaign.”

Black Majority Churches pioneer gone to be with the Lord 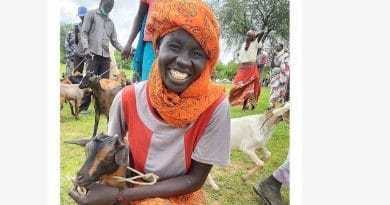