More than 52 million people in 18 countries across Africa are facing hunger as a result of extremes in the weather, according to Oxfam.

The charity estimates that the affected countries are collectively losing $700m (£543m) a year because of drought and floods.

There have been reports of farmers committing suicide in South Africa, where the scale of the region’s drought has been described as “staggering” by Nellie Nyang’wa, Oxfam’s southern Africa regional director.

Drought is also affecting East Africa and the Horn of Africa.

“In western Kenya, the crop harvest is 25% down and in parts of Somalia up to 60%. Livestock in many rural areas is emaciated and milk production is down… Nearly seven million people in the region are living just below the catastrophic hunger line,” Lydia Zigomo, Oxfam’s Horn, East and Central Africa regional director is quoted as saying.

Ahead of next week’s African Ministerial Conference on the Environment (Amcen) meeting in South Africa, Oxfam urged ministers to take a stand to ensure Africa’s environmental sustainability – which is theme of the gathering.

The charity said they should ensure that industrialised nations honour their promises to “decrease their CO2 emissions in line with the Paris Agreement’s goal of limiting global heating to below 1.5C, and honour their commitment to mobilise $100bn a year by 2020 to fund climate change adaptation and mitigation efforts in developing countries”. 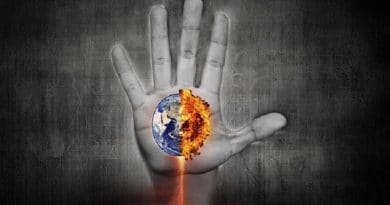