Without question, the Father’s heart breaks for the poor and the oppressed. We hear this echo in verses like Isaiah 1:17, where God calls His people to “Defend the oppressed. Take up the cause of the fatherless; plead the case of the widow”.

What’s more, Jesus began His ministry declaring: “goodnews to the poor” (Luke 4:18) and he spent time with the destitute, blind, deaf and lame. There is great injustice in our world.

Living in the UK, it hard to believe that 2 out of 3 people do not have access to surgery when they need it. In fact, more people die from a lack of access to safe, affordable surgery than from HIV/Aids, TB and malaria combined. There is a global surgery crisis today. Can you imagine if you, or a family member, became ill, but had no one to turn to?In sub-Saharan Africa, 9 out of 10 people are living without access to medical care and surgery. We have the NHS, but thousands of Africans have no help and no hope of safe surgery.

That is where Mercy Ships comes in. For over 40 years, Mercy Ships has worked with churches to follow Jesus’ model, literally helping the lame walk and the blind see! It is Matthew 25 in action, where Jesus says “I was sick and you looked after me” (v31-46). Fanta is a nurse from Cameroon. For ten years she worked with a 10lb tumour growing under her right arm. Despite her long career as a nurse,

Fanta did not have access to safe surgery and was afraid to try and have the tumour removed. So for 10 years she hid the tumour under draped shawls as she worked.“How can I expect people to respect me as a nurse and not be scared themselves when I am too afraid to do anything about my own problem?” asked Fanta, whose melon-sized tumour made it difficult to wear the nursing uniform she’d dreamed of wearing since a young girl.

“My colleagues told me I would die if I tried to have it removed or if I left it too long,” she said. “I saw the surgeries, I saw the blood, and I hated the thought of not being in control of my own body.”

But Mercy Ships, who operate the world’s largest charity hospital ship, gave Fanta the hope she needed to overcome her fear.

“The nurses at the ship were so compassionate and loving. They kept reassuring me that everything was going to be more than OK, and something in me trusted them,”

she said.Mercy Ships surgeons removed Fanta’s tumour for free, changing her life by giving her the confidence she’d been lacking for so long.

“I can now lift my arms with ease! I will be able to dress like the other ladies at my hospital. My husband has already bought me some new fabric so I can make more dresses that show off my arms!”

Mercy Ships campaign, #ChangeTheOdds, that will see the UK government match public donations to Mercy Ships until December 31st 2019. Your simple act of mercy can change the odds for thousands of people. Your donations and match funding from the UK government will support the volunteer crew to provide even more surgeries, training and medical capacity building in Senegal.

The UK government funding means public donations to #ChangeTheOdds will be doubled by the UK government, up to £2 million. Join Mercy Ships and help save and transform more lives in West Africa, lives like Fanta’s. 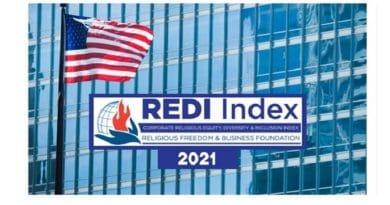 Survey finds Tech Companies are Most Religiously Inclusive US Workplaces