The family of a 15-year-old boy who was stabbed to death after getting off a bus said he was a talented footballer with plans for his life.

His mother Josephine Frimpong said she was waiting for him to come home from school when she received a frantic call saying “Baptista is dead”.

A 15-year-old boy has been charged with murder.

He also faces a charge of causing grievous bodily harm and two counts of possessing an offensive weapon.

A second boy, also 15, has been charged with conspiracy to murder Baptista.

Baptista, from North Woolwich, will be laid to rest in an east London cemetery later.

Speaking about the moment she received the phone call, his mother said: “They said ‘Baptista is dead’. I said ‘no, Baptista is not dead’ and I’m running.

“I go outside and I’m crying a lot and later on I saw police cars coming.”

Ms Frimpong, who also has a 12-year-old son called David, said she was “always missing Baptista in this house”.

“When in the morning I wake up Dave, I go to wake up Baptista and I didn’t see Baptista. I’m not happy at all, I feel… pains.”

Baptista’s aunt Elizabeth Ntiedu said he was a “very loving boy” and a talented footballer with plans for his life.

“He was a clever boy and he said ‘I wanna be a footballer but I also want to educate myself’. He had potential,” she added.

Baptista’s brother David said the siblings “used to basically do everything together”.

He said he took comfort by lying on his brother’s bed where he would “just say what I’m thinking”.

David added: “And I would say it to him when I’m alone. I feel like he’s there. Sometimes it can be really hard, but I just know that he’s in a better place.” 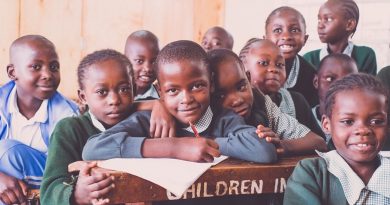 International children’s charity takes it one step at a time with fundraiser!