It was with these heartfelt words that Pastor T.B. Joshua began his sermon at The Synagogue, Church Of All Nations (SCOAN) on Sunday December 8th 2019. Hours earlier, his social media platforms – followed by millions – had published a touching tribute to Evangelist Bonnke, describing him as a “missionary with a burning passion for the Gospel.” Celebrating his ‘life and legacy of harvest’, Emmanuel TV declared, “The character of a true believer is that he finds refuge in the secret place of the Most High God. Heaven is our resting place, our dwelling place. Here Reinhard Bonnke rests – in the precious arms of Jesus Christ.”

I’m sure churches around the African continent and indeed the world offered similar sentiments and shared similar tributes. Reinhard Bonnke was, after all, a colossus in the evangelical world whose mammoth crusades led untold millions to the knowledge of Jesus Christ. However, the significance of Joshua’s poignant tribute lies in the divisive events preceding it, much of which remains shrouded in mystery by the ‘dirty politics’ that unfortunately infiltrated Nigerian Christianity. Indeed, many don’t know that Reinhard Bonnke publicly renounced any ties with TB Joshua – at the specific, urgent insistence of then Pentecostal Fellowship of Nigeria (PFN) President Ayo Oritsejafor.

In 2007, Bonnke had been interviewed by Emmanuel TV in one of his public meetings, immediately irking Nigeria’s Pentecostal fold who had denounced Joshua as an impostor who used diabolical powers. Bonnke spoke several weeks later on ABN (African Broadcasting Network) – the channel owned and operated by Oritsejafor – stating he was unaware of Emmanuel TV’s correlation with TB Joshua and renouncing any ‘endorsement of TB Joshua’ suggested by his initial interview. At the period when ‘persecution’ against TB Joshua from Nigerian Pastors was at its fiercest, Oritsejafor was undoubtedly among his chief critics, stating categorically in an interview with the Vanguard in 2009 that he did not consider Joshua to even be a Christian and threatening to ‘expel’ any member of PFN who was caught ‘fraternising’ with him. Oritsejafor’s spiritual father – the late Benson Idahosa – once famously said TB Joshua was ‘below his cleaner’ and defiantly declared he would shortly die. Without jumping to any conclusions, it’s pertinent to note his own passing followed soon after.

In an article from US-based Charisma Magazine in 2002 about the controversies surrounding Joshua’s ministry, Peter Vandenberg, then executive vice president of Christ for All Nations (CFAN), explained Bonnke’s rationale for ‘keeping a distance’ from the Nigerian cleric. “We held a meeting organised by 2000 local pastors and every one of them said that Joshua does things that are occultic and that what he is doing is not doctrinally correct… We stand with the majority of Christians there who have denounced him. Our brothers in Nigeria are on the ground there, and they know best.”

It’s intriguing to note the ministry quoted ‘the majority’ as opposed to ‘seeking God’ for insight. However, years have passed since these controversies raged and time has unequivocally spoken a rather different picture than the ‘majority’ quoted above. Rather than receding away from prominence, TB Joshua has grown leaps and bounds, emerging as Nigeria’s most well-known televangelist with an increasingly large international following. Whilst Oritsejafor has faded into virtual anonymity, Joshua’s ministry has seen exponential, sustained growth (ABN has 1,500 YouTube subscribers and Emmanuel TV has 1,500,000). Prominent figures in Nigerian Christendom who vociferously condemned him such as Mike Okonkwo, Chris Okotie and Matthew Ashimolowo have dipped into ‘relative obscurity’ compared to Joshua’s meotoric rise in influence and acclaim.

Amidst such criticism, Joshua remained silent – letting actions speak louder than words. His sermons are centred on the simple truths of God’s Word, he engages in huge humanitarian projects both locally and internationally and the countless testimonies emerging from his ministry unequivocally give glory to Jesus Christ. Whilst Oritsejafor has been embroiled in the controversy of the Prosperity Gospel – recently caught on camera ‘commanding’ Americans to pay $5,000 each for an ‘anointed mantle’ at Morris Cerullo’s church – TB Joshua has painstakingly made it clear miracles cannot be exchanged with money and openly distanced himself from the excessive greed associated with the ‘Prosperity Gospel’. To surmise the scenario, the advice of Gameliel in Acts 5:38-39 springs readily to mind: “Therefore, in the present case I advise you: Leave these men alone! Let them go! For if their purpose or activity is of human origin, it will fail. But if it is from God, you will not be able to stop these men; you will only find yourselves fighting against God.”

I expect Bonnke just listened to what the ‘majority’ said without taking time to personally observe TB Joshua or seek the face of God concerning his anointed ministry. I am sure he – like many others in the Pentecostal fold – realised the truth about Joshua’s genuineness and unique spiritual calling but found it difficult to publicly acknowledge given his past comments. Regardless, this tribute by TB Joshua provides a powerful lesson, especially poignant for those in the vineyard of Christ. Let us forget pain of the past, put aside our differences in the body of Christ and ensure we stand for unity – with Jesus Christ at the forefront of all our actions and attitudes. After all, it’s not about Reinhard Bonnke, TB Joshua, Enoch Adeboye, David Oyedepo, Chris Oyakhilome or any other minister of God – it is all about Jesus!

Tawia Acheampong is a writer on African affairs based in Accra, Ghana

What Black Faculty Need From Our White and Asian Allies

Jonathan McReynolds to Host “Worship Together,” – An Easter Celebration 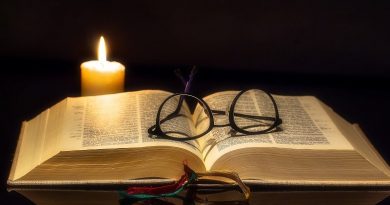 4 thoughts on “Reinhard Bonnke, TB Joshua And Overcoming Division In The Body Of Christ”