The Evangelical Alliance has appointed Peter Lynas as its UK director. In this role he will work alongside new CEO Gavin Calver as he champions the voice of evangelicals to the media and across the four nations and brings leadership to the core areas of advocacy, mission and unity within the Evangelical Alliance.

Gavin Calver commented on the appointment: “I am delighted to make this appointment. Peter is passionate about Jesus, the church and the public square and will help lead much of our work across these areas. His legal and theological expertise will be vital to help the church navigate and thrive in this current cultural context.

“Peter will help the church in the UK be brave and kind as it faces challenges in the future. He’s a well-known voice in Northern Ireland and I’m looking forward to him using his skills and gifts across the UK.”

Peter Lynas said: “I am excited to work alongside Gavin in this new role, helping to lead the Evangelical Alliance and serve our members across the UK. The work of the Evangelical Alliance in terms of mission, unity and voice has never been more important. We have an incredible range of members, a fantastic staff team, and together we can make Jesus known across the UK.”

Since 2011, Peter has been NI director for the Evangelical Alliance and in this role has become a significant spokesperson in public life for evangelicals in Northern Ireland, and increasingly across the UK. Peter regularly speaks on the media and to church audiences, especially on the incredible value Christianity brings to public life.

Originally trained as a lawyer, Peter worked as a barrister in Belfast for five years, before studying theology at Regent College in Vancouver where he remains a board member. He has previously worked for the Relationships Foundation pursuing a biblically inspired vision for a better society and taught on faith at work and ethics at Belfast Bible College. Peter has also worked as executive pastor for his church, Causeway Coast Vineyard, and with the Lynas Foodservice business.

During his time as NI director Peter has become a significant media commentator in Northern Ireland, bringing insight on legal, cultural and political issues. Peter was a leading commentator throughout the Ashers bakery court case, and he is a familiar figure at the Northern Ireland Assembly at Stormont.

In his new role, Peter will continue to speak on behalf of the Evangelical Alliance and passionately advocate for the place and value of faith in public life.

Following this change in role David Smyth will be taking on additional responsibility as head of Evangelical Alliance Northern Ireland.

The Queen’s Medal for Music 2018 awarded to Gary Crosby

What does the black poppy mean? 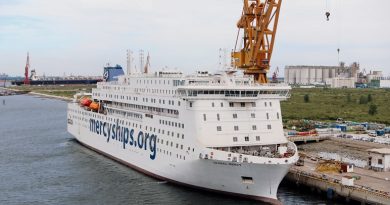