When he was sick from cancer, Baba Groden told his wife, Sherri Doucette, that once he got better he wanted the couple to advise black men how to eat well and practice yoga and meditation.

Doucette, a yoga practitioner herself, was thrilled.

But Groden did not get better; he died four years ago. “Better did not come for him,” Doucette said.

Still, after Groden’s death, Doucette has become a certified yoga instructor who teaches wellness, yoga and meditation to black men “in the heart of the hood” in Dallas.

Doucette has joined a growing number of black yoga practitioners who view the ancient discipline as a way for black men to address the emotional and physical health disparities of their community.

When it comes to mental health, African Americans in general are 10 percent more likely to experience serious psychological distress, according to the U.S. Health and Human Services Office of Minority Health.

To attract black men to yoga and its physical and emotional health benefits, black instructors said they have created spaces that are culturally sensitive, affordable and in urban communities where studios have traditionally not been established.

Doucette offers classes in the Dallas area through her nonprofit Litehouse Wellness.

After her initial marketing failed to draw black men, she advertised her classes as “Broga — Yoga for Brothers.”

“When I arrived, the room was packed,” said Doucette, whose class is held at the Pan African Connection in South Dallas.

In Baltimore, Changa Bell founded the Black Male Yoga Initiative in 2015 to teach black men and boys about holistic health through the practice of yoga.

He had not been able to find a studio with black men practicing yoga anywhere in his vicinity. To make his studio welcoming to his peers, he plastered the walls with blown-up photos of black people mastering yoga exercises.

“I knew a major factor was my personal discomfort in yoga studios,” he said. “It seemed like I was being judged over my (physical) appearance. I didn’t fit the preconceived mold.”

In 2020, Bell plans to take yoga to black neighborhoods around the country, embarking on a “Health Is Our Heritage Tour,” with pop-up workshops planned for six cities, including Miami, Louisville, Ky, and Detroit.

“I also remember visiting studios where people moved their mats farther away from me — and acted as if they were intimidated by me,” said Bennett, 29, who started practicing yoga after a physical injury in the Marine Corps. “Or I’d show up in an advanced class and people would ask, ‘Are you sure you’re supposed to be in here?’”

On a recent Saturday in St. Louis, at classes taught by The CollectiveSTL, some 30 black people showed up, half of them men.

“We’ve tried to create community. We play culturally relevant music,” said Terry Harris, one of the founders of The Collective, the only black-owned studio on the north side of St. Louis.

“We say: ‘Just come. You don’t have to wear the mask here. We know you have been hurt and that micro-aggressions have taken place against you.'”

The Collective offers free child care and yoga mats for use and only charges a donation, with the amount left up to the participant.

Back in Dallas, Doucette leads men through yoga positions by saying in a soothing voice: “You carry 400 years of wounds and trauma. Feel the pain and weight, but let it go.”

I can feel the difference in my mind and in my back — and I was depressed when I started,” said Gaston Marshall, attesting to the benefits of practicing yoga.

With awe in his voice, his classmate Terry Odis said: ” I had never been in or seen a room full of black men doing yoga. I can be myself here.” 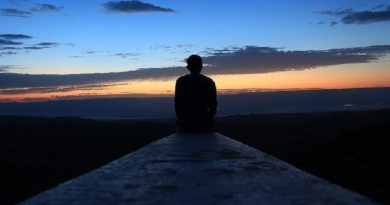