The Prince of Wales has arrived in Bethlehem on his first visit to the occupied territories.

Prince Charles visited the old Ottoman marketplace in Manger Square and the Mosque of Omar, which is opposite the site said to be where Jesus was born.

He is also expected to visit the grave of his paternal-grandmother, Princess Alice, who is buried in the nearby city of Jerusalem.

During his visit to the mosque, the prince heard how Christians and Muslims had lived peacefully alongside each other in the town for centuries.

The mosque is named after the Caliph Omar, who conquered Jerusalem in 637 but guaranteed that Christians would be free to continue to worship.

His promise was laid out in the Assurance of Omar, a copy of which was given to the prince.

The governor of Bethlehem Kamel Hmeid told Charles the story of how Omar was invited to pray inside the Church of the Nativity, opposite, but refused, saying that if he did it would become a mosque. Instead he prayed outside.

The message of religious co-existence was “a wonderful example”, Charles said.

Charles is on the second of a two-day tour in the Middle East.

On Thursday, he addressed world leaders at the World Holocaust Forum to mark the 75th anniversary of the liberation of Nazi death camp at Auschwitz in Poland.

During his speech in Jerusalem, he warned that lessons of the Holocaust are still “searingly relevant” and called on leaders to be “fearless in confronting falsehoods” and violence. 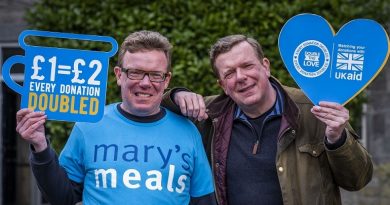