They are found in the Solomon Islands northeast of Australia with an unusual trait – beautiful dark skin with naturally blond hair.

It is believed that blondes could only be found among Caucasians; so, how do the Melanesians, mostly located east of Papua New Guinea in Oceania, have the striking contrast of the darkest skin in the world outside of Africa and blonde hair? This question has baffled many scientists for years.

Until now, genetic experts and scientists have attributed the odd trait of the over half a million Melanesian people to inheritance – from the Europeans, particularly, the British, German and Australians, who have been associated with the island for several years.

In the 19th century, many of the islands were under German jurisdiction and in 1893, the UK took the southern Solomon Islands and declared the region a protectorate.

The rest of the islands were subsequently added to the protectorate, with Australian and British companies later setting up coconut plantations. 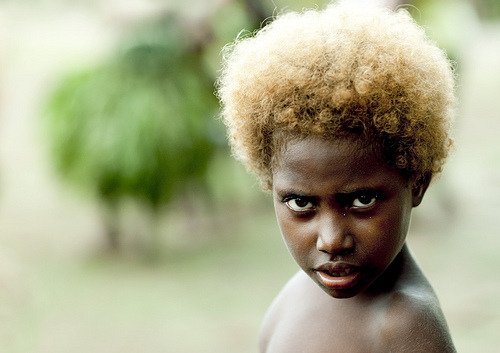 The Melanesians are the world’s only black blondes — Blonde Hair

Thus, it was not unwise to think that the dark-skinned Melanesians had their blonde hair after mixing with “foreigners,” though the local people insisted that their blonde hair was due to their diet rich in fish and their constant exposure to the sun.

In 2012, it turned out that all these theories were false, as investigations revealed that the weird colour combination of the Melanesians was due to a random mutation.

A single mutation was found to be responsible for almost half of the variation in Solomon Islanders’ hair colour and the striking aspect was that this gene mutation appeared to have arisen in the Pacific and not introduced into the island by fair-haired Europeans intermarrying with islanders.

“That’s quite unexpected and fascinating.”

The researchers gathered saliva from 43 blonds and 42 dark-haired Solomon Islanders to analyze for clues to the genes behind their hair colour.

A genome-wide analysis turned up a shockingly clear result, rare in the world of genetics where a single trait can be influenced by dozens or more genes. A gene called TYRP1, which resides on the ninth chromosome of human’s 23 pairs of chromosomes, explained 46.4 per cent of the variation in the islanders’ hair colour. (Chromosomes are coiled packets of DNA.)

A mutation in this gene affects an enzyme known to be involved in human pigmentation, the researchers found. This mutation doesn’t appear in European genomes, an analysis of genomes from 52 human populations around the world revealed. Rather, it seems to have arisen independently and persisted in the Melanesian population.”

For Jonathan Friedlaender, an anthropologist emeritus at Temple University in Philadelphia, Pennsylvania, the mutation may have arisen by chance in one individual and drifted to a high frequency in the Solomon Islands because the original population was small.

“This whole area seems to have been populated by very small groups of people making it across these stepping-stone islands, so you do have very dramatic effects in fluctuations of gene frequency.”

Out of the research, it was also discovered that while all humans outside of Africa have genes passed down from the Neanderthals, Melanesians are the only known humans with a different prehistoric ancestry.

They are believed to have evolved from an interbreeding of the Denisova hominin, Neanderthal man’s distant cousin, hence the people have to some extent different genes, which gives them their unique blond hair.

The tropical region of Melanesia is part of a larger culture area called Oceania that includes Melanesia, Polynesia, Micronesia, and Australia.

Accounts state that they emigrated from Africa between 50,000 and 100,000 years ago and dispersed along the southern edge of Asia.

Melanesia currently has over 1,000 languages, with pidgins and creole languages developing from trade and cultural interaction centuries before European encounter.

The area had no written language before the arrival of the Europeans and hence they used words of mouth from generation to generation to educate and share stories.

Till date, there are still communities that have little interaction with the rest of the world.

Christianity is the main religion, with many missionaries across the area though some people still practice their native religions such as the belief in a variety of spirits that inhabit the forests, mountains, and swamps.

Households vary in size and in some small societies, everyone in the group lives in a house. Apart from playing ceremonial and political roles in the region, women are often the primary caregivers to children and the primary producers of food.

Now with wage labour, work among the Melanesians was often cooperative. One distinguishing feature of the people is their art which is designed for their usefulness rather than for beauty.

Sculpture and painting have attracted thousands of tourists to the area, particularly, the Sepik River region, though this has yet to provide wealth for the majority of the people.

Just like the rest of the world, the tropical region of Melanesia has had to grapple with some social problems such as alcoholism, crime, and other serious health conditions like malaria, as well as AIDS, particularly in Papua New Guinea.

In spite of these challenges, the region, with its beautiful islands, is to many people a paradise with an exotic history and culture and the happiest and friendliest people in the world.