Biblical conspiracy theories allege the construction of a Third Holy Temple in Jerusalem will herald the end of the world. Jewish eschatology concerning the end times claims the Holy Temple will rise from the ground before prophesied days of the apocalypse. Many evangelists and Christian doomsday preachers believe the Third Temple will appear before the return of Jesus Christ.

Discussions of the end times approaching were sparked in November 2018 in response to a letter penned by the Jewish assembly of rabbis known as the Sanhedrin.

Jerusalem at the time was in the grips of a mayoral election and the Sanhedrin urged both running candidates, Ofer Berkovich and Moshe Lion, to rebuild the temple.

The first two Holy Temples of Jerusalem were constructed on the city’s Temple Mount centuries ago but were destroyed by the Babylonians and the Romans respectively.

The Holy Temple plays a crucial role in Jewish tradition and is a central player in prophecies and tales concerning the apocalypse.

Christian pastor and doomsday preacher Paul Begley has claimed the signs of the end times are coming to fruition.

The Indiana-based preacher said: “The rabbis of the Sanhedrin court are calling both mayor candidates to include in their plans for this city the rebuilding of the third temple.

“Folks, this is as close to Biblical prophecy – I don’t know what else to say.

“That’s how close it’s getting and if you’re a Christian, you’re saying: ‘Wow, the Messiah is coming’

“There’s no doubt about it. Jesus of Nazareth, the saviour of the world, is going to return.”

Pastor Begley enthusiastically claimed we are now living “in the last days”.

According to Irvin Baxter of the EndTime Ministries, the third Holy Temple will be rebuilt in the last seven years of the world’s existence.

There’s no doubt about it. Jesus of Nazareth, the saviour of the world, is going to return

Mr Baxter said: “As that cornerstone is laid on the Temple Mount, every network on Earth will be televising this incredible event.”

And Rick Brinegar and Dave Robbins of the Endtime Ministries said: “The Bible prophesies, in many places, that a Third Temple will be built in the near future.

“In Matthew 24:1-2, Jesus tells His disciples that the Second Temple would be utterly destroyed.

“From Matthew 24:3 throughout the rest of the chapter, Jesus sat on the Mount of Olives overlooking the Second Temple, while He prophesied of events that would occur near the time of His Second Coming.”

In the 2017 book World Empire and the Return of Jesus Christ, author Simon Downing wrote: “Dispensationalism also accommodates into its teaching the belief that the Jews must rebuild their Temple.

“The building of the ‘Third Temple’ is therefore at the heart of Dispensationalism; even though it recognises that the Beast will desecrate it before the coming of Christ and the Millennium.

“Already many Third Temple vessels and artefacts are being prepared for the bloody sacrifices of the animals that will occur in that Temple.”

Claims of biblical prophecy regarding the Third Temple are also linked to Jeremiah 33.

The scripture reads: “Behold, days are coming,’ declares the LORD, ‘when I will fulfil the good word which I have spoken concerning the house of Israel and the house of Judah.

“In those days and at that time I will cause a righteous Branch of David to spring forth; and He shall execute justice and righteousness on the earth.

“In those days Judah shall be saved, and Jerusalem shall dwell in safety; and this is the name by which she shall be called: the LORD is our righteousness.’

The bible also teaches of the Third Temple returning to Israel in Daniel 9:27.

The scripture reads: “And he will make a firm covenant with the many for one week, but in the middle of the week he will put a stop to sacrifice and grain offering; and on the wing of abominations will come one who makes desolate, even until a complete destruction, one that is decreed, is poured out on the one who makes desolate.”

Amos, an Old Testament prophet, is also believed to have predicted the rise of a Third Temple in the future.

Amos 9:11 reads: “In that day I will restore David’s fallen shelter—I will repair its broken walls and restore its ruins—and will rebuild it as it used to be.”

And Isaiah 2:2-3 reads: “In the last days the mountain of the Lord’s temple will be established as the highest of the mountains; it will be exalted above the hills, and all nations will stream to it.

“Many peoples will come and say, ’Come, let us go up to the mountain of the Lord, to the temple of the God of Jacob.

“He will teach us his ways, so that we may walk in his paths.’ The law will go out from Zion, the word of the Lord from Jerusalem.”

Dr David R Reagan of the Lamb and Lion Ministries also said: “The Apostle Paul mentions it when he declares that the ‘man of lawlessness’ will profane the temple by entering it and declaring himself to be God – 2 Thessalonians 2:3-4.

“The Third Temple is also mentioned in the book of Revelation when John is told to measure it – a symbolic way of telling him to assess its spiritual condition – Revelation 11:1-2.”

Fears of the world coming to an end were also sparked when a snake was seen slithering out of the Western Wall.

Conspiracists interpreted the snake’s arrival as the third of three unusual signs foretelling the apocalypse – the other two being the birth of a red heifer cow in Israel and fish returning to the Dead Sea.

Pastor Begley said: “Give your life to Jesus Christ of Nazareth. He is coming soon.

“I’ll be coming back with more. May there be peace in Jerusalem.”

Sheila Mitchell who saw Pastor Begley’s YouTube announcement said: “Let’s get ready our Lord and saviour is coming back, amen.”

And Stephanie Mytrosevich said: “I can’t even begin to express my longing for Christ’s return.”

In his 2017 book, When The Third Temple is Built, author Nicklas Arthur wrote: “What a relief to know that even though there is no Rapture escape we may only super such time as all the saints of history were subject to.

“Some lived and died in relative peace, some suffered deprivations and others were tortured and martyred.

“Most of the prophecy in the book of The Revelation, inclusion the six vials we have reviewed in our chapter six, have been fulfilled in history.

“We are now near the end of the era immediately preceding the Return of Christ for His Millennial Reign.”

There are, however, those who claim the end of the world cannot be predicted from holy scripture.

According to BibleInfo.com, the Bible outright states the date of Jesus’ return is not known.

Matthew 24:36 reads: “But about that day or hour no one knows, not even the angels in heaven, nor the Son, but only the Father.”

Matthew 24:42 later states: “Therefore keep watch, because you do not know on what day your Lord will come.”

Matthew 24:44 also reads: “So you also must be ready, because the Son of Man will come at an hour when you do not expect him.”

And according to the National Catholic Reporter, the Catholic Pontiff Pope Francis believes the world will come to an end in peace and not total destruction.

In 2014, the head of the Catholic Church said: “God is preparing a new dwelling place and a new Earth where justice will abide, and whose blessedness will answer and surpass all the longings for peace which spring up in the human heart.

“This is where the church is heading. More than a place, it is a state of the soul where our deepest aspirations will be fulfilled with abundance.”

The Pope also said humans will come “face-to-face” with God at the end of it all.

What will happen to the Third Temple in the end days?

According to the Book of Revelation, the Second Coming of Christ will result in the temple’s ultimate destruction.

A great earthquake will split the ground open beneath Jerusalem and mountains and islands will be displaced.

Revelation 6:12-17 reads: “I looked when He broke the sixth seal, and there was a great earthquake and the sun became black as sackcloth made from hair, and the whole moon became like blood; and the stars of the sky fell to the earth, as a fig tree casts its unripe figs when shaken by a great wind.

“The sky was split apart like a scroll when it is rolled up, and every mountain and island were moved out of their places.

“Then the kings of the earth and the great men and the commanders and the rich and the strong and every slave and free man hid themselves in the caves and among the rocks of the mountains; and they said to the mountains and to the rocks, ‘Fall on us and hide us from the presence of Him who sits on the throne, and from the wrath of the Lamb; for the great day of their wrath has come, and who is able to stand?’”

What does the Bible say about the end of the world?

No one knows the time or date of the apocalypse but the Bible’s Book of Revelation outlines the events that will unfold at the end times.

The Book of Revelation 1:1-8 reads: “The revelation from Jesus Christ, which God gave him to show his servants what must soon take place.

“He made it known by sending his angel to his servant John, who testifies to everything he saw—that is, the word of God and the testimony of Jesus Christ.

“Blessed is the one who reads aloud the words of this bible prophecy last days, and blessed are those who hear it and take to heart what is written in it, because the time is near.”.”

Call for end to ‘Worship Wars’ at CRE National 2019

Ecclesiastical Insurance launches Parish Pixels: Put your church in the picture and it could win £5,000 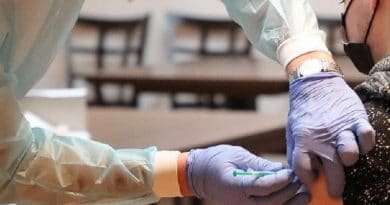