Life expectancy among women living in the poorest communities in England has declined since 2011, says a report warning of growing health inequalities.

Overall, life expectancy growth has stalled over the past decade – for the first time in 100 years.

Health Secretary Matt Hancock said there was “still much more to do”.

The largest decreases were seen in the most deprived areas of north-east England, while the biggest increases were in the richest parts of London.

Similar trends can be seen right across the UK, the report said.

The report, by Prof Sir Michael Marmot, one of the country’s leading experts on health inequalities, comes 10 years after he first published data on the growing gap between rich and poor, and between north and south, in England.

“England has lost a decade,” Prof Marmot said, calling the damage to the nation’s health “shocking”.

His follow-up report, after a decade of austerity, finds the picture has got worse.

The report, from the Institute of Health Equity, maintains the widening health inequalities and deteriorating health which have marked the last decade cannot just be put down to very cold winters, flu, or problems with the NHS or social care.

Instead, it points the finger at “social and economic conditions, many of which have shown increased inequalities”.

Prof Marmot said similar trends can be seen right across the UK, where the slow-down in life expectancy is more obvious than in most European and other high-income countries, apart from the US.

The government must tackle health inequalities “as a matter of urgency” and bring the level of deprived areas in the north up to the level of good health enjoyed by people living in London and the south, the report says.

Labour’s shadow health secretary Jonathan Ashworth described the report as a “devastating verdict on 10 years of austerity under the Conservatives” and called for “urgent action” by the prime minister.

In a statement, Mr Hancock said: “There is still much more to do, and our bold prevention agenda, record £33.9bn a year investment in the NHS, and world-leading plans to improve children’s health will help ensure every person can lead a long and healthy life.”

In some cities, like Coventry, projects have been set up to help bring about change, such as a support group for BAME mums and a centre helping people trying to find work by offering advice on CVs and application forms.

For people like Wayne Martin, a cafe providing a decent meal and a chance for families to sit down together, has been a lifeline in tough times.

The Real Junk Food Cafe is somewhere to meet others facing similar challenges.

“It’s helped me mentally, I mean, because I suffer from depression,” he said.

“One of the reasons I first started coming here was because I didn’t want to talk to other people – being on my own with three children was kind of hard.

“So coming here was opening me up a little bit and actually getting me to mix with the people and talk to them.”

Wayne says he started gained a sense of community and is now volunteering at the cafe.

The report says some local authorities and communities have been good at tackling health inequalities, and the government now needs to build on these successful examples.

Its other recommendations include:

“The evidence is clear and the solutions are there – what is needed is the will to act,” said the chief executive of the Health Foundation, Dr Jennifer Dixon.

Shirley Cramer CBE, chief executive of the Royal Society for Public Health, said: “If the new government wants to show it can walk the talk on ‘levelling up’ for the regions and groups that have been left behind, it must begin by paying more than mere lip service to the reality of the deep and entrenched health inequalities across the UK.” 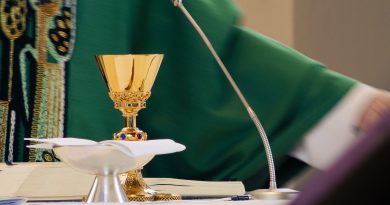 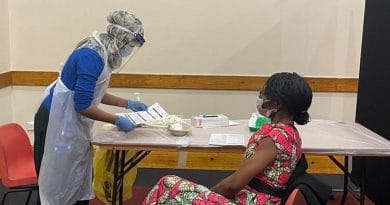 Jesus House Church is transformed into a pop-up vaccine clinic