The findings of surveys conducted by The Ubele Initiative, a civil society organisation based in London, suggest that if the crisis continues for up to 3 months, close to 90% of 137 BAME led micro and small organisations who responded to the survey could close permanently within 3 months if the crisis extends into June.

The report, Impact of COVID-19 on BAME community and voluntary organisations, is based on two surveys administered between 19 March and 4 April and received 182 responses, of which 137 were Black, Asian and Minority Ethnic (BAME) led organisations. The surveys predated the revelations captured in the Intensive Care National Audit and Research Centre’s report which has been reported on extensively since it was identified after 4 April.

According to the Guardian, for example, that report suggests that the early figures on the incidence of Covid-19 showed 35% of almost 2,000 patients in intensive care units were black or from another minority ethnic backgrounds, despite BAME people making up only 14% of the population, according to the last census.

The first wave of survey results predates the announcements, which started to unpeel some of the voices heard across BAME communities from personal stories that were not being reflected in any mainstream media outlets, until the ICNARC report.  The survey report shows that, far from being passive recipients of the virus, BAME communities are fighting shoulder to shoulder with other communities being affected. Karl Murray, the report author, states: “The spread of the virus is such that, more than half of those who responded, knows of a colleague who had been diagnosed and had to self-isolate (i.e. 63% of respondents indicated that they know someone – colleague and/or volunteer – who has been self-isolating due to a diagnosis of having COVID-19).”

The most shocking conclusion is that, despite the many surveys that were then taking place, none of them sought to identify possible impact on BAME communities or organisations. The majority of BAME led organisations, were micro and small, according to the National Council for Voluntary Organisation’s (NVCO) definition, with 87% reporting that they do not have sufficient reserves to last more than 3mths. The impact would mean no support being provided to close on 20,000 clients each week across seven of the regions who responded.

Yvonne Field, The Founder and Managing Director of Ubele, said:

“…there are heartfelt stories of community support, innovative and in some cases transformative thinking, heroism and deep love being shown, which in my opinion is what we need. We need to hear such stories and celebrate as they give us hope about the nature of humanity and a small insight into potential individual and collective futures. However, this piece of work into the impact of Covid-19 on BAME led organisations shows struggling BAME organisations without a lifebuoy to keep them afloat. Those few surviving organisations (many which have been in existence for up to four decades) have ended up rudderless without a clear steer as survival beckons. To rescue the BAME third sector, locally, regionally and nationally, we need more than lifeboats – we need a refit; a strong keel, a new rudder for a new direction, an anchor to ride the current and future storms. This report, against such a backdrop of a world upturned from this pandemic, provides an opportunity to reboot and rethink how we recover.”

“It is increasingly clear from emerging evidence that people from Black, Asian and minority ethnic backgrounds are being disproportionately affected by the outbreak of COVID-19. Existing inequalities have worsened through this crisis and it’s more important than ever that support is given to BAME community-led organisations. We are helping to support these groups through the London Community Response fund, but we need the Government to provide further support and, after a decade of austerity, acknowledge the need to deal with the structural problems in our society which have led to these inequalities.”

The report is published online and can be obtained through visiting: www.ubele.org 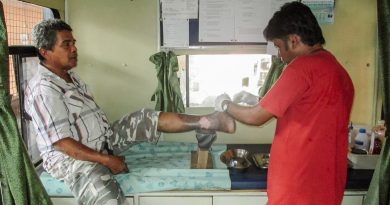 Connecting Where it Counts