Over the last few days, I have watched events unfold in America with a very heavy heart. The death of George Floyd in Minneapolis, Minnesota, as a result of being restrained by three police officers has sparked the worst riots seen in decades in 76 or more cities across America as deep-seated racial tensions have boiled over. Anyone with a shred of humanity would have been appalled at the sight of the three police officers restraining George Floyd, with one kneeling on his neck for several minutes.  I would like to offer my deepest condolences to his family and friends. That horrific picture of Mr Floyd pinned to the ground has since gone viral and has been the catalyst for the outpouring of anger that we are witnessing. I watched a New York Times reconstruction of the minutes leading to his death. His distressed cries of “I can’t breathe, I can’t breathe,” as he lay on the ground have remained with me since then.

Amongst the emotions I felt was undeniably an anger that this kind of thing should be happening anywhere in the world and especially in the “land of the free”. If I, a black British-Nigerian, living in London, felt so much anger and sadness, I can very well understand how a young man or woman living in an American city can be enraged. For him or her this is too much on the back of a number of other high-profile deaths of African Americans in similar circumstances. The death of George Floyd has once again brought to the fore the very deep fault lines that exist in the American society around race.​

What should our response be here in the United Kingdom to all these happenings in America? Perhaps I should be asking what should my response be? I am Nigerian, British, black, a Christian, and have had the privilege of serving my immediate community and the wider community as a Christian leader for the last 25 years. These factors, of course, greatly influence my response.​

My first response is one of empathy. I understand, (to the extent that you can understand without being in a person’s shoes), how frustrations can boil over as a result of an incident like this. I know this was the trigger, but the conflagration is really the result of similar incidents over the many years and encountering prejudice in normal day-to-day life because of the colour of your skin. I empathise.​

My second response would be to pray. I believe with every fibre of my being that prayer works. Our response to life’s challenges should be to approach a gracious and merciful God to intervene in any situation that we face. As a Christian that is one of the most effective things I can do for my brothers and sisters in America.​

My third response would be to use every opportunity I get to share a message of love and forgiveness. To do otherwise would be a denial of my faith. Jesus Christ, to Whom I have committed my life, has shown us that these are the cornerstones of our faith. This does not in any way trivialise the very real pain and frustrations that are being experienced by many African Americans who suffer the impact of ingrained racial bias.​

My fourth response would be to speak out. Our faith enjoins us to stand against injustice, sometimes at great cost. The silence of the German Church during the holocaust and the silence of sections of the Church in South Africa during the apartheid years are more modern examples of how evil and injustices thrive when good people do not speak out. I am a Christian, so it is my problem. It is our problem.​

My fifth response would be to speak into our society here in the United Kingdom. And I do so in all humility understanding the complexity of the issue. I believe that I have a responsibility to the communities to which I belong and serve in to do just that. Speak. We owe it to ourselves to see what is happening in America as a mirror that has been placed before us. We need to ask ourselves what is reflected in the mirror. What do we see? We must not be under the illusion that we do not have our own challenges here. We do. The inherent inequalities in our own system and the institutional racism that exists in many of our institutions must be named and addressed.​

I think it is fitting that the way is led by the Church. The moving confession by the Archbishop of Canterbury Rt Rev Justin Welby, (a man for whom I have great respect and admiration), at the General Synod of the Church of England earlier on this year, is a model for beginning to address this major issue. Speaking to the gathering, he stated: “when we look at our Church we are still deeply institutionally racist. Let’s be clear about that”. He went on to offer a personal apology. He said: “I am ashamed of our history and I am ashamed of our failure.” I have been privileged to work with him and other women and men of God, both black and white, who are committed to making the Church (the Body of Christ ) look more like Jesus (the head of the body). The more we become like Him the more He can use us to touch a wounded and hurting society. The example of admitting and confronting this institutional racism I would suggest is a significant step in pouring balm on the wounds that exist. You can only imagine the effect if more of our institutions and their leaders adopted a similar approach.​

All of us in leadership positions have a responsibility to contribute to the healing of society. Our political leaders were elected to serve a country that is now a collection of different ethnic groups. Their words and actions must constantly reflect an awareness of this reality. Any section of our society that is underrepresented or denied a voice will experience frustrations which, if left unchecked are likely to boil over eventually. This is true of our black and ethnic communities, especially the younger generation.​

This leads me to my sixth response. I am resolved that I will do all that I can in my various capacities to encourage more representation of black and ethnic minorities in the many institutions that affect our day-to-day lives. Speaking directly to those in the black community, a number of whom I am privileged to pastor, the time has come to take very seriously the call to serve in the police, in local and central government, in politics, in the education system and in the judiciary, to name  a few. I also ask that those who run these, and other institutions commit to concrete action that will make this a reality.​

I would like to end by praying for the United States of America and for our nation, the United Kingdom. 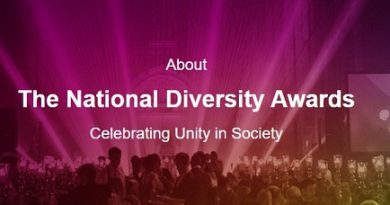