They were bombarded with obscenities, as the six fierce-looking Chinese law enforcement officers held their cuffed hands, ignoring their pleas and dragging them to nowhere.

This captures the travail presently confronting the many Nigerians living in parts of China, as the current coronavirus pandemic bares its fangs. Many Africans have been rendered homeless; their belongings – and other things they had laboured to acquire over the years – bundled up and jettisoned into refuse dumps, due to what has been termed the ‘xenophobic tendencies’ of the Chinese. But they, the Chinese, not wanting to be seen as obsessive jingoists, have crafted their own argument: “The exercise is to put those returning to the country in their proper place, so as not to contaminate the rest of us and spread the disease further.”

While their stand may appear prima facie valid, there is more to it than meets the eye. The Nigerians who bore the whole brunt of it all were, in reality, not returnees, and had been firmly established in the country. And, to add to this, there were indeed expatriate Chinese citizens returning to their native land, who were spared the indignities meted out to Nigerians, Ghanaians, Ugandans, Zimbabweans and other Africans. Why this double standard? I dare to ask.

Now it’s like a free-for-all fight scenario, with all manner of Chinese politicians becoming ‘COVID-19 experts’, some suggesting that Black Africans in China could possiblybe the carriers of the virus and prone to spreading it. This assertion – a farrago of nonsense – is more like the pot calling the kettle black. Do they think sensible people out there will take this barefaced lie hook, line and sinker? Aren’t they merely resorting to scapegoating because they are short of options in curbing the dreaded virus that has engulfed China like a ravaging inferno? It really upsets me to see leaders apportioning blames and engaging in constructive ambiguity, just to divert attention or score some silly political points.

When Donald Trump, in attempts to minimise the impact of the disease in the US, called it the ‘China virus’ because of its origin, he was pilloried for his assertion – and rightIy so. The sensible thing is that all hands should be on deck to checkmate the spread of this virus, including the adoption of all measures necessary for its annihilation. Tracing any disease to its origin just for the sake of it – and without any logical reason – negates all genuine efforts at curbing such disease. Of what use would it be, for instance, were we to refer to Ebola as ‘the Congolese disease’ or kwashiorkor as ‘the Ghanaian disease’?

While I call on the Chinese government to resolve this problem as soon as possible, and for our own government to call the Chinese authorities to order – for instance, the Ghanaian government has recalled their ambassador – I cannot help but take a trip down memory lane, when countries making up the East and South East Asia looked up to us, and wanted to be all things Nigerian. Of note was Malaysia, which, in the early 70s, scurried down to my plantation village of Iyanomo, near NIFOR* in Benin City, to borrow their first ever palm seedlings. Today, that country is the world’s second largest producer of palm oil (after Indonesia**), while our once rich plantations have reverted to the bush, due to our unbridled greed for petroleum, the devil’s excreta, which itself, swells the pocket of the very few, bringing untold hardship to the many.

The suffering youths are today fleeing in droves to these Asian countries to make both ends meet. And do not be surprised if the Malaysian government were to adopt the same Chinese approach, in selecting out Black Africans as scapegoats to be dehumanised. This said, I am not contesting the fact that all countries have their migrant population, but my point, put succinctly, is that our policymakers should put Nigeria on the right footing and make it a country that works. If this were done, able-bodied youths would not be defecting the country en masse to be third-class citizens in these countries that once envied our fast-paced achievement 50 years ago, before we were consumed by the scent of petroleum. Our decrepit infrastructural facilities should be revamped for the benefit of us all.

As the hydra-headed virus has surfaced in our country, I enjoin fellow Nigerian citizens to take absolute precaution, so that this disease is nipped in the bud. Social distancing should be respected as well as the lockdown measures, though I say this guardedly and with trepidation, as there is economic hardship in the land, and people need to feed their hungry stomachs. But again, nothing lasts forever, as the aphorism goes. Therefore, we shall be victorious over COVID-19 and all that comes with it.

Martins Agbonlahor, a trained lawyer and journalist, is the author of Killing Them Softly: The Struggle for Women’s Rights in Nigeria. He lives in Greater Manchester, UK. 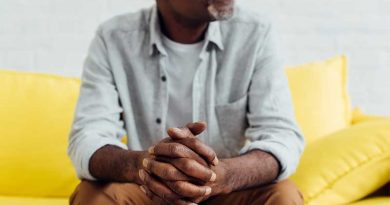 Growing in and through challenging times by Rev Stephen Brooks

THIS IS THE CHURCHES MORDECAI MOMENT!