Confined for three months within the United Kingdom I’m finding it hard to avoid a sense of national turmoil. There is the dreadful COVID-19 pandemic and ongoing issues of how the government should have responded. There is the way the appalling killing of George Floyd in the USA has ignited a bonfire to do with how we treat Britain’s past acts of history and its present mixture of cultures and races. There is also concern that the orderly departure from Europe we were promised has been replaced by the prospect of a chaotic and damaging exit. 2020 is certainly going down as the year to remember that we would like to forget.

These are tricky matters to comment on: profound, sensitive and complex. I am aware, too, that I have readers in many other countries where they are going through their own particular troubles. I am also conscious that I have readers from across the political spectrum. So I’m sure I have many British readers who believe that Boris is doing ‘a good job under the circumstances’ as well as those who consider that he and his colleagues should be immediately charged with at least criminal negligence. I’m also aware that these ‘statue wars’ issues of culture, race and history are complex and deeply felt. Given that, it’s tempting to say nothing, but I think this is neither wise nor right. We Christians must be involved in some way. But how are we to approach these matters? I don’t want to offer specific answers here; they require longer treatment and there are other people who are much better qualified. Yet what I can offer is some suggestion about how we begin to find answers to these issues.

The Kingdom of God is, in contrast, very different. It is a countercultural movement across all nations made up of those men and women whose allegiance is not to any power system but to Jesus Christ who has redeemed them. Sometimes, the Kingdom of this World may openly and visibly oppose God’s Kingdom through abuse and persecution. Perhaps more frequently – and more dangerously – it may disguise itself in the language of God’s kingdom and, by doing so, seduce God’s followers into supporting it.

The responsibility of those in the Kingdom of God has always been to resist the direct and indirect attacks of the Kingdom of this World. It’s a long, tough battle and it isn’t over yet. That final victory (guaranteed by the victory of the cross) will only occur at the coming of Christ when, as Revelation 11:15 (NIV) tells us, the ‘Kingdoms of the World’ will become ‘the kingdom of our Lord and of his Messiah’.

Given this idea of two warring kingdoms, let me lay down three foundation stones for how we are to think about how we live in the world, whether tumultuous or not.

The first foundation stone is that as Christians our ultimate loyalty is to God’s Kingdom. We will inevitably be involved in the Kingdom of this World; we may earn a salary from it, we may even hold power within it but, when it comes to any conflict between kingdoms, we are God’s men and women. We may be mocked or persecuted for standing against the Kingdom of this World but we have no alternative. To call Jesus ‘Lord’ means that there can be no other lords and no other loyalties.

The second foundation stone is that our ultimate morality comes from God’s Kingdom. One of the problems with earthly kingdoms, whether republics, monarchies or multinational organisations, is that they set their own rules and demand that they be followed. Here again we must resist: our Lord has told us in his Word what is right and wrong and it is those values that set our standards. Living as we do amidst the Kingdom of this World there inevitably comes a time when we believers in Christ have to say, ‘I’m sorry but I cannot do that.’

The third foundation stone is that our ultimate destiny is God’s Kingdom. The kingdoms of this world are appealing yet we need to be reminded that, for all their power, they are limited and will not last. Where now is Nebuchadnezzar’s Babylon? Hitler’s Reich? Stalin’s Union of Soviet Socialist Republics? However powerful the Kingdom of the World may seem, we need to remember that in eternal terms, it is God’s Kingdom that conquers and conquers completely.

We have no option but to be involved in this world’s affairs. Jesus has instructed us to be salt and light. In all our involvement we must constantly remind ourselves that we are people of the Kingdom of God and we have a loyalty, morality and destiny. And, as we play our part, let’s continue to pray that great prayer at the end of the book of the Bible in Revelation: ‘Come, Lord Jesus, come!’ 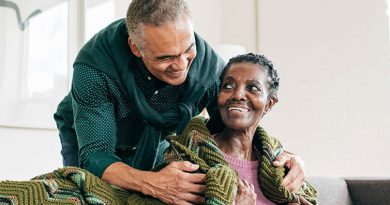 The power and potential of kindness – What has it to do with mental health? by Dr T. Ayodele Ajayi