Sipokazi Nxumalo, known as “SK”, releases her debut radio single Jesus, through The Jesus Collective. Having spent 14 years as the narrator and lead singer of the Grammy Award winning Soweto Gospel Choir, SK has begun a new chapter of her ministry with her solo career.

SK’s unique interpretation of the song Jesus – I Love Calling Your Name made famous by Shirley Caesar in the 80s, comes off her 15 track album titled “Uhambo Lwam,” which is Xhosa for My Journey. “I have seen the power in the name of Jesus, I hold on to His name and have seen things shift in my life. Especially now during the pandemic and the lockdown we find ourselves in, we need to stand on the solid rock, which is the name of Jesus. God has moved us from our churches and other influences, this is the time we get to connect with Christ himself. He is the centre of it all, and must be the centre of our lives.”

When the troubles surround me,

and I didn’t have to despair

Lord, You told me that You’d be right there.

Seems like all my problems, they have just begun

but I’m not gonna worry about it no more, You’ve already won.

Jesus, Jesus, everyday Your name is the same.

The album was recorded at the Roodepoort Theatre, and is also available on DVD.

“As much as I enjoy studio recordings, there is something extra special about the live performance. Although recording live can be tough and scary, it’s the adrenalin and the energy of the audience, which really creates an unbelievable atmosphere which is evident on this album,”

SK has had the incredible experience of performing on world famous stages, namely The Sydney Opera House and even Carnegie Hall in New York during her time with The Soweto Gospel Choir.

Of the 15 songs, there is a mix of Zulu, English and Xhosa languages on the album. SK teamed up with well-known artist Xolani Mdlalose who is also the co-host of the TV Show Destiny on the track You Brought Me Over. Nomakhuze Ndabula joined SK on the Xhosa track Yiba Nathi.

SK describes herself as an old soul, as a child growing up listening to the likes of Ron Kenoly, Alvin Slaughter, Aretha Franklin and Diana Ross with her mom, and currently Elevation Worship, Maranda Curtis, Tasha Cobbs and Ntokozo Mbambo.

“My debut album shows my versatility, I am able to sing traditional Xhosa music that not everyone is familiar with, as well as contemporary Gospel.” SK’s voice has taken her all over the world to places such as USA, UK, Germany, Australia, Tanzania and Nigeria, just to mention a few. SK has shared international stages with the likes of Queen, Celine Dion, Aretha Franklin, Queen Latifah, and Angelique Kodjo, the list continues.

“I love touring, meeting new people and experiencing different cultures. I write my best music when I’m away from home in peace and quiet and in nature, where I can connect with God, He meets me right where I am.”

SK hopes that the message of this album will resonate with people who are struggling with feeling unworthy, or feeling like you don’t belong.

“For a long time I’ve been struggling with believing what the world portrays beauty as, just based on the exterior. They define the outer, not worrying about the inner.  God doesn’t create ugly, we are created in His image and in His likeness. Beauty is found in a beautiful heart and character, and in a beautiful spirit. When you realise and believe that your identity is found in Christ alone, you will know that you are enough!”

SK’s favourite scripture that she bases her life upon is Psalm 27: The LORD is the stronghold of my life– of whom shall I be afraid? When evil men advance against me to devour my flesh, when my enemies and my foes attack me, they will stumble and fall. Though an army besiege me, my heart will not fear; though war break out against me, even then will I be confident.

Growing up in a devout Christian home, SK is one of 5 children that were single- handedly raised by their God-fearing mother. SK is married to her husband Linda Nxumalo and together they have 2 sons, Isaac (7) and Prince (2). SK was born in Port Elizabeth in the Eastern Cape and speaks English, Xhosa, Zulu, and some Afrikaans. 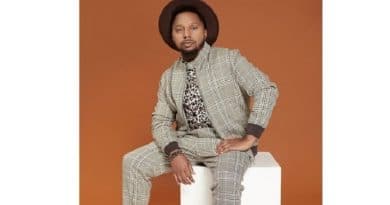