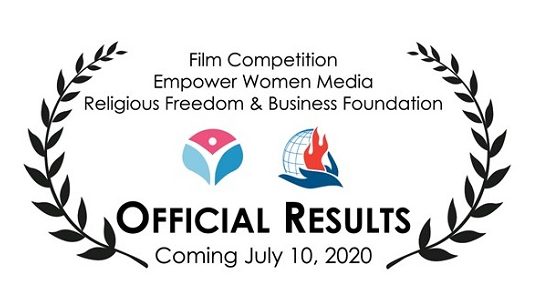 Together with Empower Women Media, the 2020 Film Competition Showcases Inclusivity and Multi-Faith Collaboration in the Workplace, Marketplace and Society

In Long Road to Freedom, Mariya shares her story of immigration to Canada and then the US, where she and her team – in collaboration with local businesses in Kansas City – empower refugees and promote freedom of belief through in Kansas City through Global FC, a football/mentoring program that bridges diverse cultures to come together, forming just communities where all are free to be fully-known and fully-loved in pursuit of their God-given purpose and potential.

District 18 is the story of a young woman living in a society where diversity is shunned, but she longs for freedom of belief. She finds it in a land where Article 18 of the Universal Declaration of Human Rights is celebrated: Everyone has the right to freedom of thought, conscience and religion.

The short films are artful and compelling explorations of the impact of freedom of religion and belief (FoRB) in the workplace and community. Whether inspired by real-life events or fictional stories, animated, or experimental, the films thoughtfully seek to affirm that FoRB is good for business and thriving communities.

“In an age when there is an urgent need for inclusion and appreciation of diversity, this film competition has empowered new voices from around the world to contribute to the discussion,” says Brian Grim, president of the Religious Freedom & Business Foundation, co-sponsor of the competition. “I look forward to showcasing these stories in the months to come, especially in support of religious inclusion in workplaces worldwide,” Grim added.

“We are passionate about empowering women to create media for their mission,” said Shirin Taber, Director of cosponsor Empower Women Media. “I am thrilled to see women sharing their religious freedom stories and expanding their outreach to some of the toughest places in the world.”

The finalists include: Her Factor, a film arguing for women’s empowerment in the Middle East by Ruba Abbassi and Hiba Eid (Jordan); Together as One by Sarina Faizy (Afghanistan), who tells her women’s empowerment and freedom of belief story under Taliban rule; and Freedom to Succeed by Lydia Sunberg (Hungary ) and Sage Taber (U.S.) who share why immigrants and refugees need the freedom to contribute economically to their new society.

On August 1, 2020, Empower Women Media and the Religious Freedom & Business Foundation will host an online film festival and award ceremony to honor and celebrate the 2020 winning films. Registration for the film festival is now open (https://religiousfreedomandbusiness.org/2/post/2020/07/religious-freedom-business-film-festival.html).

Empower Women Media invited 17 highly respected judges (listed below) to review the short films for their storytelling and advocacy impact. Judges include Dr. Azza Karam, President of Religions for Peace, Robert Seiple, the first US Ambassador at Large for International Religious Freedom, and other leading voices for religious freedom.

In partnership with the Religious Freedom & Business Foundation, the top films will be presented before CEOS, United Nation partners, NGO and faith leaders at the Global Business & Peace Awards in Tokyo August 23-25, 2021. The Religious Freedom & Business Foundation will award each grand prize winner of the film competition $5,000 and a trip to Tokyo to present their short films prior to the 2021 Paralympic Games at the Global Business & Interfaith Peace Awards.

This is the third annual Empower Women Film Competition sponsored by Empower Women Media in association with the Religious Freedom & Business Foundation (RFBF). The first competition was held at the start of the 2018 Paralympic Games in Korea where Love Has No Borders by Deborah Paul (UK) and Christy Anastas (Palestine and UK) took grand prize.

In 2019, the grand prize went to A Different Way, a film by Ambassador ’Sujay’ Suzan Johnson Cook and Lauren Merkley (US), which documented how Ambassador Sujay, who served as the United States Ambassador-at-Large for International Religious Freedom from April 2011 to October 2013, brought faith to the front lines as a 9/11 first responder in New York City..

All the winning and finalist films can be found here:  https://religiousfreedomandbusiness.org/film-competition-2020 (password: Film2020)

2. Robert Seiple (former US Ambassador at Large for Religious Freedom)