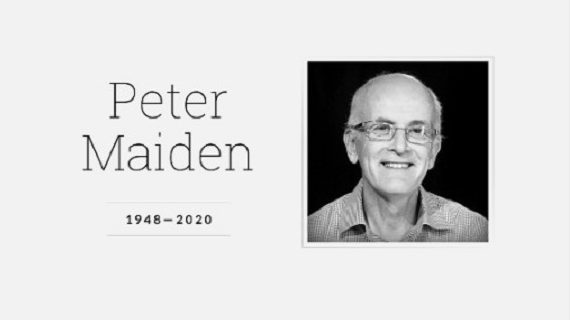 George Verwer, the evangelist and founder of Operation Mobilisation (OM) has led tributes to former OM International Director, Peter Maiden who passed away last week after a long battle with cancer. Verwer, who founded the missions agency in 1961, said of Maiden “Peter’s love for Jesus was a reality going back to his childhood. I regularly saw the Lord and the fruit of the Holy Spirit operating in his life. He was a great student of the Word and had an unshakable belief that the Bible was the Word of God.  He became one of the UK’s and the world’s outstanding Bible teachers with invitations from all over the world which increased due his involvement in the Keswick Convention. We grieve at this time in all our humanness, but we celebrate his life and know he is with the Lord.”

David Vardy, who worked with Peter in various roles and had a friendship of more than 50 years echoed Verwer’s words,

“Peter’s 38 years at the forefront of a work committed to mobilising young, and not so young, people to the work of reaching a lost world for Christ has left an indelible imprint on thousands of lives. In the history of modern world missions the names of George Verwer and Peter Maiden will be writ large.”

“It was always a great thrill to sit under his preaching and teaching ministry on many occasions and to hear him open up the Word of God with such an amazing ability. No matter how busy he had been, how far or for how long he had travelled, there was a perpetual freshness in his preaching which could only have come from God.”

As well as his work with OM, Peter Maiden, became a member of Council and Chairman of Trustees of Keswick Ministries, the organisers behind the annual Bible Teaching conference hosted in Cumbria.

The leadership of Keswick Ministries also paid tribute to Maiden and his impact,

“Peter’s heart burned with a passion for those who did not know Christ, and every fibre of his being and every moment of his life had that global perspective. Even when he was seriously ill, he was genuinely interested in others. Far from being self-obsessed, he cared for others in a way that meant everyone who engaged with him felt better for having been with him. Even his characteristically brief emails bore the marks of his love and care.”

As well as his roles at OM and Keswick Ministries Peter also served as a church elder at Hebron Evangelical Church in Carlisle and was on the Board of Trustees for Capernwray Hall and its Bible School. He has also written several books, with his latest publication, Radical Gratitude, released this month.

Maiden is survived by his beloved wife, Win, his children, grandchildren and wider family.

In Peter’s honour, a memorial fund has been set up through Operation Mobilisation, for more information go to https://www.om.org/peter. A Thanksgiving Service for Peter’s life and work will be held when public health restrictions permit.