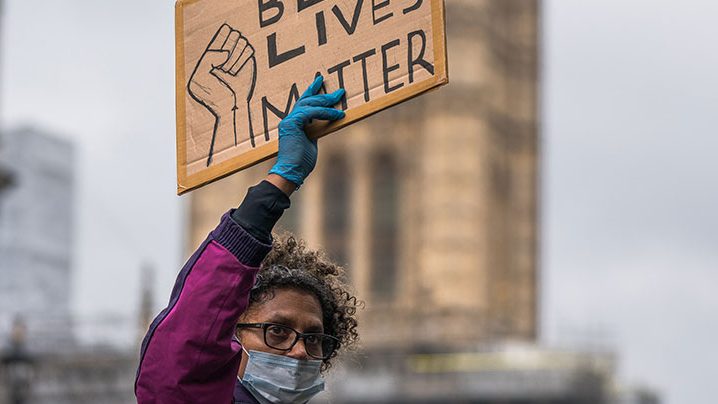 Black Lives Matter protests were held across the world, following the killing of George Floyd by a policeman. Here in the UK, Black Lives Matter UK took to the streets to express their support of the US movement. Keep The Faith spoke  asked a few BLM UK supporters why they attended the protests in London.

Alton P Bell, 62, is Senior Pastor at Wembley Family Church in Middlesex. He has been a Christian for 38 years. He attended the Black Lives Matter protest in Parliament Square, London.

KEEP THE FAITH (KTF): What inspired you to attend a BLM protest?

ALTON BELL (AB): The violent murder of George Floyd, in full gaze of the entire world, was a clarion call to the peoples of the world to execute justice and change the narrative of White privilege and racism in the western world. I marched, because I believe that racism blights the entire world and runs counter current to what the God of the Hebrew Bible desires from all of His creation. That is, to live justly and to walk humbly before Him. It was important to show that the Church feels the pain of racial injustice.

AB: The churches must be the prophetic voice where it is located in. The church must be the ones who implement Jesus’ mandate: to be good news to the poor; set the captives free; bind up those who are broken-hearted; comfort those who mourn; proclaim the Lord’s favour, and be oaks of righteousness in their communities. Essentially, churches must be centres of healing, restoration and reconciliation, where people can encounter the love of God.

AB: As the chair of MJR (Movement for Justice and Reconciliation), we will be raising awareness of the continuous impact of the enslavement of Africans, which spawned the current challenging White hegemony that exists throughout the west. We will be doing this by lobbying Parliamentarians and challenging Christian leaders to become the change they were called to be. We are also working with educators to de-colonise the national curriculum, to incorporate Black studies throughout all the subjects.

KEEP THE FAITH (KTF): What inspired you to attend the protest for Justice for Shukri Abdi, a young Black Muslim schoolgirl and refugee who was murdered by her White classmates in 2017 in Greater Manchester, and the BLM protest?

Shermara Fletcher (SF): I was inspired to attend the BLM protests as a form of solidarity, to publicly uncover the underbelly of racism and its destruction in society. George Floyd’s public execution and Breonna Taylor’s murder whilst in her sleep moved me to join the global protest. Remaining silent and politically polite in 2020 was no longer an option.

SF: I would like to see the church in the UK publicly denounce racial injustice, and be a prophetic agitational voice of change and challenge to power in the public square, through the strategy of community organising. I would like to see all churches confront any form of complicity, passivity, colonial theology or racial injustice in its own structures, as well as speaking against injustice in the public space.

I would also like to see a collective voice/powerbase/funding stream, with specific, clear and measurable asks about what we want in society in time for the 2024 general elections, and for the Church to be like Jesus, and be at the forefront of bringing a revolution where Kingdom culture dominates and dismantles empire.

SF: I believe that the Church is a key agent of change in the fight for racial justice, and consequently I’ve joined several Christian millennial networks/forums, where we discuss the importance of political theology in the Church and public life. I am involved in community groups, which galvanise political change through grassroots and national civic institutions. I am also opening pathways for millennials and young people from grassroots urban areas through the William Seymour Project, to work in the political spaces of influence and their grassroots institutions to understand the political landscape. I am actively fundraising to ensure capacity and opportunity is accessible for all, and I have also been invited to speak on several podcasts and broadcasts, including UCB and Sky News, to speak and educate about how community organising can help bring about systemic change.

Bazil Meade MBE, 69, is Director/Founder of the London Community Gospel Choir. He attends The Arc Church in Forest Gate, and was present at protests held at Parliament Square, London.

KEEP THE FAITH (KTF): What inspired you to attend a BLM protest?

BAZIL MEADE (BM): I went on the March with my daughter, Vernetta Lynch, because I was moved to my core, experiencing anger, frustration, feeling vulnerable and brutalised after watching George Floyd’s life being squeezed out of him by a person dressed in a uniform, whose sworn responsibility is to protect the citizens of that country.

Having read regularly of killings of innocent Black people by police and citizens of various countries across the world, and seeing the execution of George Floyd on screen in such an inhumane manner was the last straw.

I couldn’t sit by and not get involved with all the thousand people of many nationalities demanding an end to this unjust slaying of Black men, in particular, in America.

BM: My Christian faith encourages me to be visible against injustice of all forms. I read of Jesus becoming angry to the point of becoming physical, when He could no longer tolerate hypocrisy by the people, who are meant to be leaders of the community, using the temple for their own agenda.

I am disturbed by the silence of some of our church leaders, especially those who are descendants of Africa. Truth be told, it could have been any one of us lying on the ground with a knee on our neck. It is outrageous if any minister feels it is not a struggle he or she should engage with.

The absence of church leaders is a worrying indication of the lack of true leadership within our religious gatherings. The responsibility should not embrace only having church, but take front position when one’s congregation’s existence and quality of life is a problem to haters of Black people.

The racism and hate towards its Black and Brown people on screen and on social media coming out of America are very present in the UK. It is system based on and used to restrict the progress of the Black population on all levels, as various reports/reviews have shown year after year.

BM: I am determined to continue to speak against racism when I teach gospel music to all races – especially Europeans, as the source of this cancer is Europe. It is important for the enlightenment to happen through the means available to us, and music is a very powerful tool. I am committed to using my position to encourage the teaching of Black history and to reveal the real history of the UK, showing its involvement and the role it played in the enslavement of Africans four to five hundred years ago.

The reason for seasons by Esther Kuku