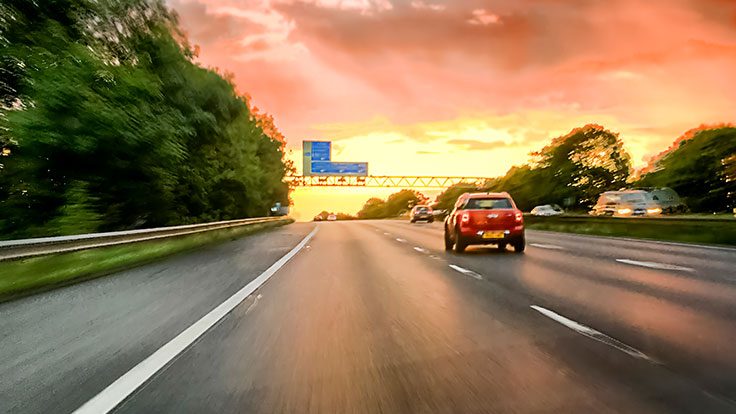 I don’t know if you’ve ever been on a motorway and got off at the wrong turning. If you have, you’ll know that, despite your error, you’re still not that far from where you were meant to be.

But if, instead of trying to get back on track, you just keep on going, you’ll eventually end up somewhere completely different from the destination to which you were originally heading!

An example of this can be seen in the Roman Catholic Church, where respect for Jesus’ mother eventually led to the veneration of Mary, ‘Mother of God’ (the Council of Ephesus, 431); acceptance of Mary’s ‘Immaculate Conception’ (defined by Pope Pius IX in 1854), and the teaching of her ‘assumption’ or bodily ascension into heaven (pronounced doctrine by Pope Pius XII in 1950).

In time, like a car hurtling down the wrong highway, the speed with which erroneous teachings became accepted doctrine eventually accelerated – giving rise to the acceptance of priestly celibacy (1123 and 1139); transubstantiation and confession (1215); purgatory (introduced by Pope Gregory I in 593 and proclaimed dogma in 1439); ‘Tradition’ having equal authority with the Bible (1545), and Papal Infallibility, (defined by Vatican Council I in 1870).

Works replaced faith, ‘Tradition’ reinterpreted Scripture, and popes became ‘infallible’ – creating a system that kept its members subservient, the clergy all-powerful, and the Church itself rich.

But what, if you’ll pardon the pun, am I driving at?

Answer: That doctrine and the correct application of Scripture clearly matter and that, unless we’re careful, we can all too easily end up taking wrong turns and going down blind alleys.

This is why the Bible has so much to say about false teachers, preachers, prophets and apostles – from Deuteronomy, Ezekiel and Jeremiah to the Gospels and Epistles. As Matthew 7:15 warns: ‘Watch out for false prophets. They come to you in sheep’s clothing, but inwardly they are ferocious wolves.’

It’s why Scripture also cautions against falling for ‘destructive heresies’, ‘false words’ or ‘things taught by demons’ (1 Timothy 4:1). In Acts 20:30, Paul warns the Ephesian elders that ‘Even from your own number, men will arise and distort the truth in order to draw away disciples after them.’

I remember a letter from an American evangelist who claimed that, if you sent him a ‘seed faith gift’ of money, he’d pray you out of poverty. Later, when the same ministry overstretched itself financially and fell into debt, he sent a letter asking me for cash. I was tempted to write back, saying: “Send me your ‘seed faith gift’ of money and I’ll pray you out of poverty!”

I didn’t, but the irony of the situation wasn’t lost on me.

Then, many years later, I noticed an ad in a newspaper which offered a free bottle of anointing oil. ‘I used the anointing oil at every given opportunity,’ said one grateful recipient, ‘and today, I own many properties, and I have various businesses.’ Another apparently satisfied customer used the oil on their house, ‘and got the exact asking price when I sold it.’

It may have been lucrative, but it’s certainly not biblical!

Like many, I was somewhat bemused when, on 18 August 2019, having completed his sermon from halfway up a 55ft helter-skelter in Norwich Cathedral, the Bishop of Lynn then slid down the temporarily installed structure.

Sadly, though not inappropriately, synonyms for the word helter-skelter include ‘chaotic’, ‘disorganised’, ‘confused’ and ‘haphazard’.

That same year, Southwark Cathedral allowed its nave to be used as a catwalk to sell clothes – a parade of indecently dressed models processing down the aisle like skimpily clad bridesmaids. In Rochester Cathedral, a nine-hole, bridge-themed crazy golf course prompted newspaper headlines along the lines of, ‘More tee, vicar?’

This summer, the cathedral at Norwich is planning on hosting ‘Dippy the Diplodocus’ – an 85-foot long dinosaur on loan from the Natural History Museum.

Could it be that well-meaning attempts to entice the unchurched into church by offering funfairs, dinosaurs or golf indicate the slippery slope of a far deeper spiritual malaise – with misguided ministers apparently having lost their way and taken a wrong turning?

The circuses enjoyed by Roman emperors, with their wild animals, gladiatorial combat and violent martyrdom of Christians, would appear to have been replaced with an entirely different kind of circus!

The problem, as I said earlier, is that once you accept as right something that’s wrong – and continue travelling down that path – you’ll eventually lose your sense of direction, and traverse roads that’ll only take you further and further from God’s ways and His Word.

Instead, we should be like the Bereans, who examined the Scriptures to see if what they’d been told was true.

My prayer is that with the Bible as our map and the Holy Spirit as our Guide and satnav, we’ll avoid going down roads that only lead to a dead-end.

Gary Clayton is married to Julie, the father of Christopher (16) and Emma (13) and works for Mission Aviation Fellowship (MAF). To learn how MAF aids Bible translators and missionaries serving some of the world’s most isolated people, visit www.maf-uk.org

Good Grief in the church by Andrew Rashford-Hewitt