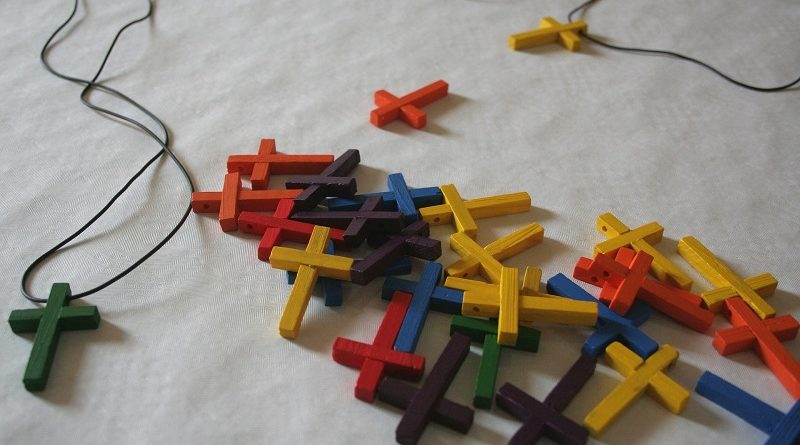 Growing up, “phooey” was my G-rated response when disappointed with circumstances. And if I was mad at a person, I’d go PG once in a while (when my parents weren’t around) by hurling a few “stupids” at my verbal victims. That’s about as rough as it got. My childhood home-life was pretty strict that way. Words mattered. And certain words of a four-letter variety were simply not tolerated.

If anyone concludes from this that I’ve never used actual profanity, they’d be wrong. According to Jesus, the hard truth is that insulting someone by calling them stupid (fool/raca/worthless one) is murderous profanity, a hell-deserving disregard for the dignity of others (Matt. 5:21–22). Make no mistake: I’ve been profane, just like everyone else. I’ve just chosen a different vocabulary to get it done.

One way we use profanity is what I call “the profanity of belittlement.” Here’s what I mean: when we belittle others, we’re profaning the image of God. Profanity certainly can include well-known four-letter words, but it can also involve fixating on what is ugly, crude, or vulgar.

Disrespect for God and His Image-Bearers

I’m convinced that, in Scripture, profanity is largely about irreverence—a trivializing disrespect for God, for people, and for what is holy, beautiful, majestic, good, or even terrifying (such as hell and damnation). We are profane when we fail to revere God’s holiness, honor his law, fear his justice, respect his image in others, or gratefully enjoy his creation.

We are profane when we fail to revere God’s holiness, honor his justice, or respect his image in others.

Speaking through Moses, God says people will bear their iniquity when they profane what is holy (Lev. 19:8). He insists that what’s holy be treated as holy. Same goes for what’s good. Paul even says those “who forbid marriage and require abstinence from foods that God created to be received with thanksgiving” have abandoned the faith and are deceived by demons (1 Tim. 4:1–3). Why are these taboos so bad in Paul’s eyes? Because “everything created by God is good, and nothing is to be rejected if it is received with thanksgiving, for it is made holy by the word of God and prayer” (vv. 4–5).

It isn’t holiness to choose celibacy or champion manmade taboos because we believe marital intimacy, food, or fun are bad. On the contrary, that’s profanity—an irreverent demeaning of what God has made, has called good, and has intended for our pleasure and joy (Gen. 1:31; Acts 10:9–16; 14:17).

God applies this to the way we treat peoplewhen he says to Jewish Peter concerning Gentiles, “What God has made clean, do not call common” (Acts 10:15). Peter and most of his Jewish contemporaries were guilty of profanity by “commonizing” others—by marginalizing, trivializing, and despising people made in God’s image.

Profanity, then, is not about the number of letters in a word; it’s about the way we treat, talk about, or fail to reverence or enjoy people and things God has created. Profanity is a bad thing, not primarily because it talks about bad things, but because it talks badly about good things. These good things encompass all God has made—including humans made in his image (Gen. 1:26–31).

As Christians, we need to cultivate a more comprehensive understanding of profanity so we can guard against every expression of it in the heart and on the tongue. Once we’ve identified from Scripture all that God calls holy, clean, and good, we then must examine whether we’re treating such things with appropriate respect and gratitude.

What’s at stake here is much more than a putting off of the sin of profanity; it’s putting on respect for, and joy in, all that God considers right, beautiful, majestic, holy, and true. What’s at stake is whether or not we’ll put irreverence toward God and disrespect toward others to death, choosing instead a life of daily wonder, gratitude, mutual esteem, and awe-filled joy.

In the brilliant light of Isaiah’s vision of God, the surprising conviction the prophet felt was that he had a dirty mouth (Isa. 6:5). He didn’t mean he had a potty mouth. Rather, when he encountered the Holy One (Isa. 6:4) he realized everything he’d ever said about God was profane when compared to God himself.

He learned in that moment that God is so holy, so good, so beautiful, so wondrous, so fearful, so full of light and love that all the words he’d ever spoken about him had been, by comparison, filthy.

We need to cultivate a more comprehensive understanding of profanity so we can guard against every expression of it.

We need to curse the profane—pronouncing harm and ruin over that which deserves to die: our irreverent minds, ungrateful hearts, and demeaning words. We need the sense of God that Isaiah had. We need a sense of his divine majesty and justice—and such a respect for his image in others—that it shapes how we talk to, and about, both him and them.

This alone is fitting for those who bear the Sacred Name in a secular and profane world.

‘We are praying for all those affected by this new virus.’ National day of prayer amid Coronavirus