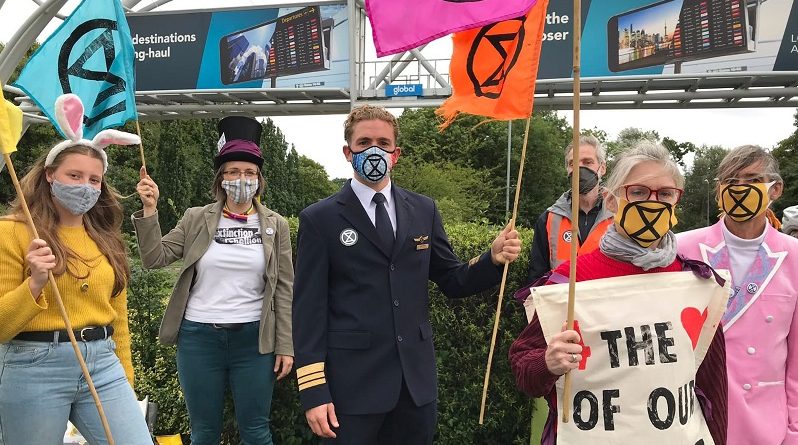 The 1st of September marked the start of Extinction Rebellion’s September Uprising, in which high-level disruption is set to take place in three locations across the UK – London, Manchester and Cardiff.

In the run up to the protest, five individuals were pre-emptively arrested in their homes, charged with conspiracy to cause criminal damage. One of those arrested was 55-year-old Rev Steven Nunn, an Anglican priest and father of four.

When asked about how to tackle the climate crisis, Rev Steven stated:

‘I think now is the time for a much more radical approach. Whether that be legal, whether that be illegal. Whether that involves going to prison or whether it doesn’t. Something needs to happen so that people will stand up and listen’.

Each of those arrested appeared in person at Highbury and Islington Magistrates courts on the day of their arrest. The court has put them on remand until their plea hearings at the end of September.

Last weekend saw a wave of climate actions taking place across the country, in the lead up to the September rebellion. Members of Christian Climate Action, the name given for the Christians of Extinction Rebellion, joined with their local XR groups across the country to carry out disruptive actions in their local towns. Banner drops happened on motorways and bridges across the country, groups took to airports, including Gatwick, Farnham and Stansted, to protest airport expansion. There were actions which took place at local banks, protesting their funding of the climate crisis and the words ‘LIES’ was spray-painted over the Shell HQ building.

Rev Helen Burnett, who was at the Gatwick protest site said:

‘The aviation industry has such a huge impact on this climate crisis – and it’s not a case of us all being in this together. 70% of UK flights are taken by 15% of individuals. It is a case of a privileged and powerful minority disregarding how their actions will impact children and the poorest communities around the world – while the poorest half of the world is only responsible for 10% of emissions. Why is destructive behaviour being rewarded with airmiles, airport expansion and tax-free aviation fuel?

‘Todd Smith, who had been a pilot for Thomas Cook joined us at Gatwick for the protest. With the memory of clear skies still with us, we could create the change needed to reduce the impact of the airline business both locally and globally and push forward to a green new deal.’

Christians of Extinction Rebellion are set to be at each of the three protest sites in September – getting involved in road-blocks and other disruptive actions as well as organising an environmental eucharist service and a stations of the cross.

Paul Kunert, a father of three from Kent stated that he was willing to be arrested for the cause if it came to it: ‘’I’ve never been arrested before, but I see no other way to get government to take this seriously. We’re sleep-walking into a global-heating catastrophe. We need to change now, before it’s too late.’

At the London protest site, Christian Climate Action will be holding an opening ceremony on the 31st August at 7pm. This will take place in the grounds of St Johns Church Waterloo and will act as a blessing over the weeks to come. This ceremony will lead into a week-long 24-7 vigil, where people will carry out prayerful protest through the day and night. This vigil will be attended by former Archbishop of Canterbury Dr Rowan Williams, who has pledged his support for the climate protests. Vigils are also happening at the Cardiff and Manchester locations.