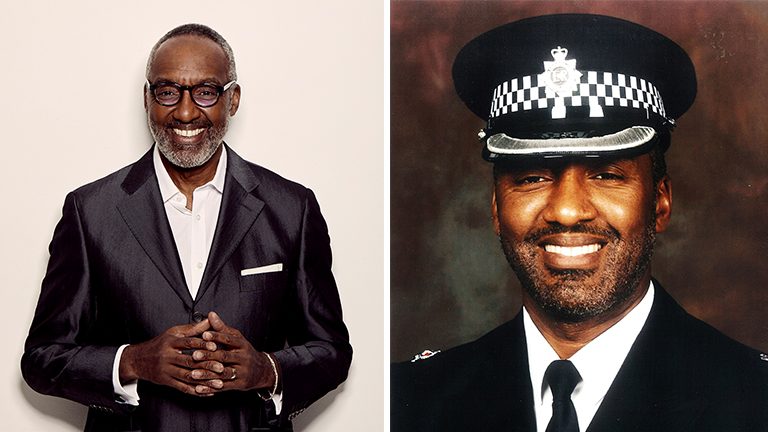 Described by The Voice newspaper in 2018 as ‘one of the Black officers who helped change the Met’, Dr Leroy Logan MBE is a founder member of the Black Police Association Charitable Trust. Born in 1957 in Islington to Jamaican parents, Leroy is a proud Londoner; a strong advocate for good relationships between the police and Britain’s minority ethnic communities; a passionate mentor for young people, and a highly respected advisor on knife crime. His autobiography, ‘Closing Ranks’ (published in September 2020), is the gripping account of his lifetime campaign to break down prejudice and stereotypes, providing powerful insights into race relations in Britain today.

Rhoda Hardie (RH): What inspired you to write ‘Closing Ranks’?
Leroy Logan (LL): I felt it was a story that needed to be told. The issues of inequality, which I experienced when I was growing up, are sadly still evident today. I hope that people who are facing similar issues today will be helped and encouraged by reading about the way I navigated myself through an often hostile environment.

RH: Although you were born in London, you spent three years in Jamaica as a child. What effect did that time have on you?
LL: My time in Jamaica really opened up my mind to greater possibilities. I saw Black police officers, Black doctors, Black prime ministers… and that gave me a determination not to be restricted in what I could achieve. The transition back to London was very difficult. One of my cousins was repeatedly arrested on no grounds, and eventually returned to Jamaica to avoid getting a criminal record or a custodial sentence. My parents were wonderful at helping me to navigate this difficult time, from advising the best routes to walk to school to avoid trouble, through to encouraging me to aim high in all that I did. But the realisation that Black people have such inequalities simply because of the colour of our skin is something which I knew would make or break me.

RH: Your call to policing was unexpected, to say the least. Can you tell us about it?
LL: I had got to know a couple of White off-duty policemen at my local gym, who had shown me the human side of policing and that not all policemen were racist. I was in my comfort zone at work; however, my boss told me one day that he couldn’t see me having a long-term future in science and medicine, but that he could see me being a great cop. When I talked about it with my wife Gretl, she encouraged me to investigate further. The sense that I should train for the police force kept nagging at me and wouldn’t go away.

RH: You write in the book about your father being badly beaten up shortly after your application to join the Met. What made you decide to become a policeman after all?
LL: I’ve never sensed as much hate as I did when I saw my Dad leaning backwards in an A&E waiting room chair, with swollen black and blue eyes. Initially I walked past him, as his face was so contorted that I didn’t recognise him. I told Gretl there was no way I could join the police now, but she and others encouraged me not to judge the whole police force by a few bad officers. My best friend’s mum, who was a community activist, told me: “We need an organisation that looks like London; we need Black officers.” My boss offered to keep my job open for six months, in case I needed it to fall back on, and my strong internal desire for policing continued. Telling my dad that I had applied for police training was very hard. He was upset but, to his credit, he drove me to the Hendon Police College the night before the start of my foundation training, and I respected him deeply for that.

RH: In 1993, when your wife left you for a time, she said you were “too into your ambitions” and you needed “to understand the importance of your faith and your family”.How did this influence your priorities from that point onwards?
LL: Gretl’s words and actions forced me to sit up and wise up. I had been taking her for granted, but she stood her ground and made me listen to what I needed to hear, not what I wanted to hear! I had to rethink my priorities. I had been to church in the past, but I didn’t have a personal relationship with God. Gretl and I started attending church again together, and we were both baptised within a month. Shortly afterwards, I was injured in an arrest, and had to take time off work while I recovered. Initially, I was frustrated but I gradually sensed that God needed me to take this time to stop and reflect. This led to the realisation that God had wanted me to become part of the police force, so that I could change the organisation through launching the Black Police Association (BPA). It was a lightbulb moment.

RH: Can you tell us about the BPA and how it came to be formed?
LL: As Black police officers, we wanted to improve the working environment of all Black police personnel, as well as improve the recruitment and retention rate for Black police officers. We also wanted to build bridges with the Black community, which tended to view the police with distrust and suspicion. We had to stand up and be that critical friend, in order to modernise the police service and ultimately to offer better service. The police and the public need to be in partnership. If the police look like the community they serve, there is more empathy, sympathy and understanding, which leads to better dialogue and breaking down of barriers.

RH: This November marks the 20th anniversary of the murder of Damilola Taylor, a crime which shocked people all around the UK. Can you tell us about your involvement in that case?
LL: It was the ultimate clash of my personal and professional lives in many ways, although I didn’t realise the family connection (Damilola’s father, Richard, is the cousin of Leroy’s wife, Gretl) until I attended a memorial service for Damilola on behalf of the BPA. I was convinced that having Black officers working on the case was key to breaking down the wall of silence from frightened Black residents in the area, and this led to breakthroughs in the investigation very quickly. Since then, I have been involved in various events and initiatives linked to the Damilola Taylor Trust, including the Spirit of London Awards, One Big Community, and more recently the cross-party Youth Violence Commission.

RH: Why is your work with and mentoring of young people, which you continue to do in retirement, so important to you?
LL: I think a lot of it stems from the fact that I wish I’d had something like that when I was a youngster. I want young people to know they have the ability to change their environment rather than to become a product of it, and to take the right path to achieve their potential.

RH: The 1999 report into the Stephen Lawrence murder concluded that ‘institutional racism permeates the Met police service’. Would you say that is still the case today?
LL: Yes, it is the case! I had high expectations after the Macpherson Report – an in-depth scrutiny of policing, following the Stephen Lawrence inquiry. Recruitment and retention increased between 1999 and 2009. But then there was a new government in 2010, followed by austerity and the Brexit factor correlating with an increase in hate crime – and with some police officers taking liberties with the law. It saddens me. The last 10 years have been a retrograde step, with the culture hijacked by more aggressive policing. It feels as though all progress has been eroded in terms of race and equality, and it is a very hostile environment.

RH: At the end of ‘Closing Ranks’, you write that your focus on young people is ‘a lifetime vocation until we get this knife crime issue sorted’. Do you feel progress is being made on that front?
LL: Education is the key to increasing opportunities, and not allowing young people to be manipulated into the idea that street justice is right. If you don’t have guidance and support at a crucial stage, this can lead to a never-ending cycle of violence. We have to have a Public Health approach, working with communities, building trust and confidence together. Early intervention and prevention programmes are key; we need to offer support, not just punishment.

RH: What advice would you give if one of your children or grandchildren told you they wanted to join the police?
LL: I would encourage them if they had a real sense of calling, but I would want them to go into it with their eyes open. They would need to realise that it is tough but that, if you are good at what you do and remain authentic to yourself, you can be a strong advocate for the organisation.

RH: In 50 years’ time, how would you like to be remembered?
LL: As someone who was willing to step out of their comfort zone to make lives better, safer and more secure. Being true to myself and to my calling – even in difficult times – has been key, and my faith has centred and sustained me.

I do have a strong character, but I am not remarkable – I just did the best I could.

‘Closing Ranks’ by Leroy Logan is available now in hardback.