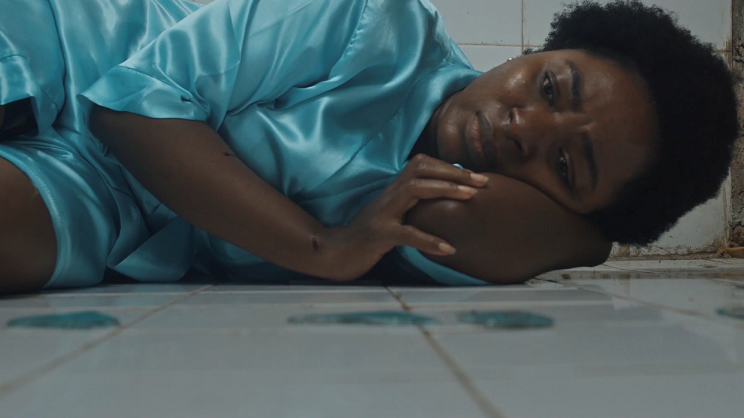 The debut feature film, FOR MARIA EBUN PATAKI, by 28-year-old Director Damilola Orimogunje; powerfully charts a woman’s struggle with post-partum depression. It is one of only a handful of films that deal with this topic.

At a time when the world finds itself in crisis, grappling with the fall out from the COVID19 pandemic, FOR MARIA offers compelling insight into an individual’s struggle to keep themselves from the grip of mental decline.

FOR MARIA EBUN PATAKI, a deviation from the traditional Nollywood content that Nigeria is known for, gives an authentic presentation of a working-class family in Lagos. It is a rare treat and is a narrative of its time in the context of BLM.

After the complicated birth of her first child Maria, Derin (Meg Otanwa) becomes withdrawn from family life; unable to engage in the celebrations around her newborn. Struggling to come to terms with what it means to be a mother, Derin fails to bond with her baby and becomes a shadow of herself.

Director, Damilola presents a narrative with complexity and emotional depth striking for a filmmaker of his generation.  He is part of a collective of BEYOND NOLLYWOOD filmmakers that Author and Curator Nadia Denton quotes as being poised to supersede the traditional Nollywood and make names for themselves in the canon of world cinema. She sees social advocacy as one of its key crossover appeals of this daring but little known film from Nigeria.

Speaking on the social advocacy element of the film Damilola says:

I hope [FOR MARIA] transcends beyond just a film and creates more awareness about mental health. I want audiences to feel the emotions of the characters, understanding the story beyond depression. I want people to see themselves and identify with this story as an aid to healing and introspection.

It is on this basis that the production team have embarked on a social impact campaign to bring about broader audience awareness of the issues that the film presents pertaining to mental health, depression and the challenges women face with childbearing and family life.

FOR MARIA EBUN PATAKI will have its world premiere as part of the BEYOND NOLLYWOOD strand at Film Africa (30 October – 8 November 2020) on the BFI Player.

In November it will feature at the 52 edition of the International Film Festival of India.