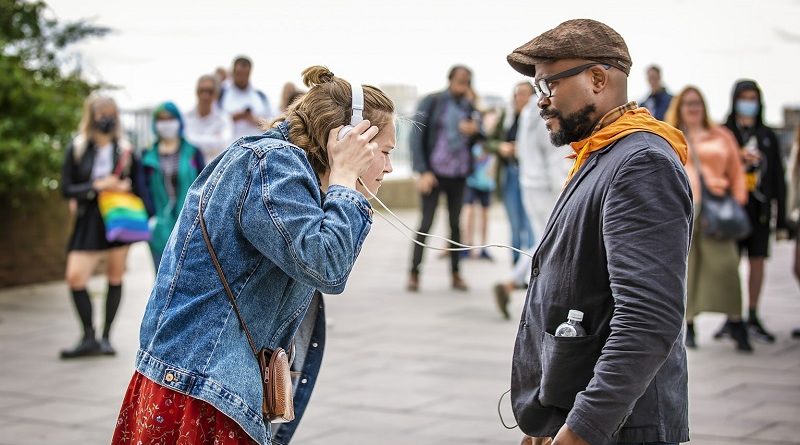 Aria Entertainment and WEF Productions are delighted to announce that following the critically-acclaimed UK premiere of C-o-n-t-a-c-t, this immersive, two-hander outdoor performance featuring a captivating 3D sound design will run in partnership with The Lowry in two locations – Salford Quays and central Manchester for six weeks from 19 January 2021. Casting will be announced in due course.

“We are absolutely thrilled that C-o-n-t-a-c-t will embark on a run in Salford and Manchester after its launch in London this Autumn. Greater Manchester is a fantastic city-region of culture which we have strong roots in so we could not be more proud to be bringing this unique sensory experience to new audiences in partnership with The Lowry.”

Matt Eames, Senior Programmer and Producer at The Lowry, said:

“In these challenging times it’s so important we find new ways to connect with audiences. After the show’s big impact in London, we’re excited to work with Katy and WEF Productions to bring C-o-n-t-a-c-t to two locations in Greater Manchester before it continues its journey around the world. I’m certain our audiences will love this unique blend of sound and immersive theatre.”

“Since writing this play and developing the new technology during lockdown in Paris back in April, I could never have imagined that C-o-n-t-a-c-t would go on to be something we could share on such an international level. I am so proud that we have been able to bring people together to experience quality live theatre safely during these times”

This innovative production opened to 4* reviews from The Guardian and the i, with The Times calling it “a tantalising vision of a new kind of theatre for these difficult times.”

Originally created by Samuel Sené and Gabrielle Jourdain and premiering in France with French production company Musidrama over the summer in a world where social distancing became the ‘new normal’, this timely story of a moving and unexpected encounter explores the themes of mental health and anxiety through the eyes of Sarah as she is approached by someone she believes to be a stranger. She discovers that he can hear her thoughts but how? Who is this man? Dive into her mind in this unique sensory and immersive new show and experience theatre like never before.

The show runs for 50 minutes without an interval and audiences download the audio from the app which is a completely new piece of technology synchronizing the spectators and actors, allowing the show to play with theatrical concepts and a new form of dramaturgy. Audiences of no more than 17 per show will purchase their tickets online and will then receive a link to download the app which will provide the exact location.

Following the government’s announcement regarding the reduction of social gatherings to 6, it is understood that this doesn’t affect performances of C-o-n-t-a-c-t as the show complies with the safety & hygiene measures in place for businesses and the performing arts set out by the government. This pedestrian performance is an outdoor promenade experience for small groups of up to 17 and adheres to strict social distancing between audience members. It is also an audio experience that involves no direct speaking of any actor in the play. All audience members will be required to wear a face-covering and observe social distancing measures.

Tickets can be purchased via The Lowry’s website here and the latest video can be viewed here.