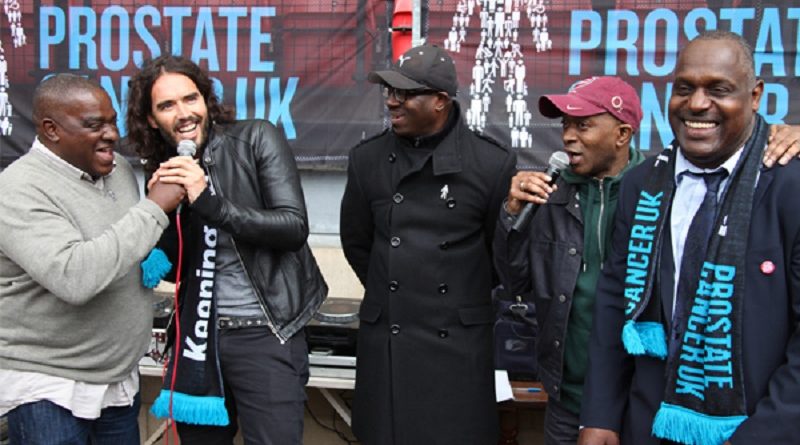 Errol was diagnosed with prostate cancer in 2010 and has been on a mission to let other men know about their risk since. Now he’s getting some royal recognition for his selfless crusade, and using his MBE to do what he does best. He’s calling for black men to take Prostate Cancer UK’s 30 second online risk checker.

On his prostate cancer diagnosis:

My wife was complaining about my snoring, so she made me an appointment with the doctor. I sat in the doctor’s reception waiting, and I picked up a leaflet from Prostate Cancer UK. I read about the PSA test and thought I should probably have it done. Little did I know that those 10 minutes were going to change the rest of my life.
Two weeks later, I got a call from my doctor who asked me to come back and do another blood test. I did the test, then a further two weeks after that I was asked to come in for a biopsy, followed by a scan. My doctor then sat me down and said my prostate was covered in cancer. I ran out of the room, went and sat in the car and I think the word ‘cancer’ hit me then. I just burst into tears. Fortunately my cancer was picked up early so now I’m determined to raise awareness of the disease.

On his crusade to help others, and giving discounts on car MOTs in return for men promising they’d speak to their doctor:

The credit has to go to my wife, Sharon for that one, because after feeling sorry for myself and not knowing what to do next she turned around and made a statement that I will carry with me for the rest of my life. She said, “Look, this cancer has knocked you down but has not knocked you out. You’re going to go 12 rounds with this, but what I know you’re going to do is take everybody with you.”
So, I said to my customers, “When was the last time you had your prostate checked? You brought your car in here for me to check because there’s a problem. Do you know what’s going on in your own inside?” Men need to talk about it even if they don’t want to.

On his MBE honour for outstanding achievement in the community:

It came as a complete shock. I was absolutely over the moon when I saw it. I felt pride, but it’s not just about me, this honour is for all of us at Prostate Cancer UK. It’s on behalf of we, not me.
Over the last 10 years we’ve probably helped to save over 1000 lives. And long may it continue. One of the things that I am really proud of is my ‘Man of Men’ pin badge. Everywhere I go that comes with me and it’s so great to see people wearing the badge everywhere.

It’s very important for all men to know the risk with prostate cancer. But especially Afro Caribbean men because they’re at higher risk. If you’re black and over 45, have a conversation with a doctor, especially if you have a family history of prostate cancer. Take the 30 second online risk checker right now.

Anyone with concerns about prostate cancer can contact Prostate Cancer UK’s Specialist Nurses on 0800 074 8383 or online at www.prostatecanceruk.org.