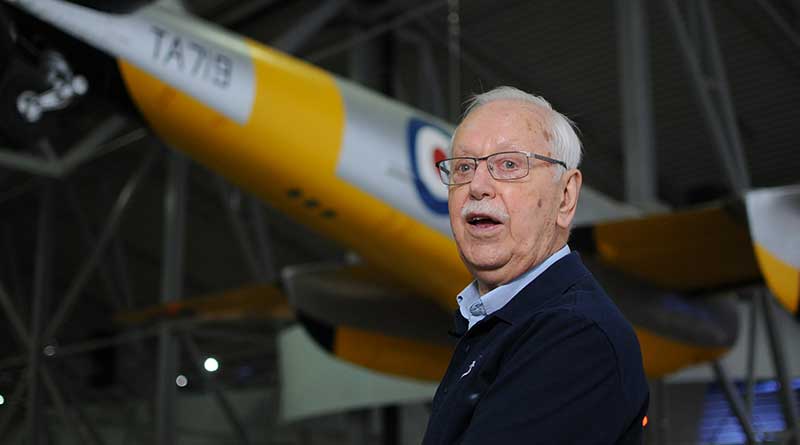 In 1945, Stuart King, an RAF Engineer Officer who had risked his life taking part in the D-Day landings, felt God calling him to use his skills for the Kingdom, “using aircraft as an overflow of God’s great goodness.”

With World War II over, the vision of using planes to save lives, rather than raining down death and destruction, resulted in the formation of Mission Aviation Fellowship (MAF) in 1945.

By 1947, enough money had been raised to buy the organisation’s very first aircraft – a Miles Gemini. A year later, Stuart and fellow missionary Jack Hemmings left Croydon for a hair-raising six-month survey flight across Africa.

Stuart later wrote: “We flew the plane into a squall of icy rain with a 70mph crosswind for good measure. There had been a brief debate about waiting for better weather, but we’d done crazier things in the war, and couldn’t wait any longer to start this new adventure!

“Although that first pioneering survey was exciting, tough and dangerous, God helped us not to waver – even when our sleek little aircraft lost height and crashed in the Burundi foothills.”

Following the survey, Sudan was seen as the African nation that would benefit most from MAF’s services. Regular operations started there in 1950.

“As the number of MAF programmes increased over the years,” Stuart said, “so God has provided – often miraculously. Our first aircraft crashed, the second was destroyed, then the third, but God always provided.”

In 1951, while repairing a crashed aircraft in Abaiyat, Sudan, Stuart met missionary Phyllis Bapple. Later, when the head of SIM’s mission station there told Stuart: “You can have anything you need that will help you,” Stuart took him up on his offer and married Phyllis!

After their wedding in Khartoum, Stuart and Phyllis moved into a small room at the SIM headquarters, sharing their bedroom with spare aircraft parts!

In time, they were blessed with three children, seven grandchildren and six great-grandchildren. “Phyllis,” Stuart said, “was God’s gift to me.” Although she died unexpectedly in 2003, “her rich heritage remains.”

For the past 75 years, MAF has helped distribute Bibles and life-saving vaccines; transported church workers and Bible translators; evacuated Christians in times of conflict; provided food for the famished, and airlifted ill and injured patients to hospital – saving valuable time and precious lives.

MAF also enables humanitarian agencies, such as the UN, UNICEF, World Health Organisation and the Red Cross, to respond promptly to the needs of people affected by cyclones, earthquakes, floods, hurricanes and tsunamis.

Having led MAF UK for more than 40 years, Stuart stepped down in 1987. Despite ‘retirement’, he continued to visit the Folkestone office as President Emeritus, offering encouragement and advice.

One of Stuart’s last visits was in November 2019, when he received the Award of Honour from the Honourable Company of Air Pilots for his outstanding contribution to aviation. His name is now listed with the astronauts, Neil Armstrong and Jim Lovell.

Three years earlier, he was appointed Chevalier in the Ordre National de la Légion d’Honneur by the French Government for Stuart’s “acknowledged military engagement and […] steadfast involvement in the Liberation of France.”

Before he died, Stuart said how excited he was by “the massive growth of churches and Christians in Africa, Asia and South America,”, and their “strong desire to reach out to other parts of the world with God’s love.”

Looking back on MAF’s 75-year ministry, he prayed for “God to raise up more personnel to live for His glory – people who will be better than we were – more skilled, more in love with the Lord, and still pioneering… speeding the Lord’s return.”

The mission, established from the ashes of war with one aircraft and a small number of staff serving one African country, has grown to an organisation whose 138 aircraft serve 26 developing countries. MAF’s 1,300 personnel – 1,000 of whom are nationals, rather than expatriates – enable access to 1,400 remote locations.

Paying tribute to Stuart, Bishop Anthony Poggo, the Archbishop of Canterbury’s Adviser on Anglican Communion Affairs, said: “Over the last 30 years I have benefited first-hand from the ministry of MAF in my work […] when I was the Bishop of the Diocese in Kajo-Keji – a seven-hour, risky and time-consuming road trip to Juba, could be cut down to just 30 minutes by air.

“This underscores the importance of MAF […] Stuart literally saved lives by providing the facilities to medevac people in life-threatening situations.”

For a man born shortly after World War I, in March 1922, Stuart’s energy and commitment continued unabated, until this earthly king with a heavenward focus finally met his heavenly King on 29 August 2020, at the age of 98.

Gary Clayton is married to Julie, is the father of Christopher (16) and Emma (13), and works for Mission Aviation Fellowship (MAF). To learn more about MAF and the 26 African and the Asia-Pacific countries served by 138 light aircraft, visit www.maf-uk.org

In the storm – Compassion for the lonely