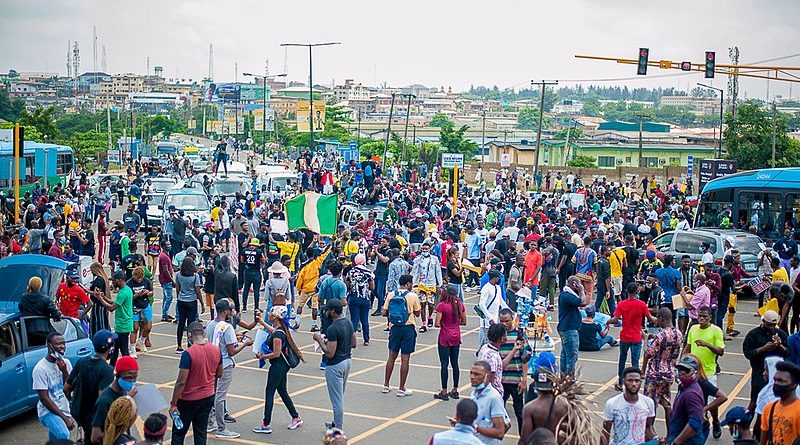 The current End-SARS protests In Nigeria where so-called “lazy and unemployable youths” are clamouring vociferously for a reform of the vicious Special Anti-Robbery Squad (SARS) emphasises the relevance of the aphorism that ‘you cannot continue to fool a people all of the time.’

The Nigerian Police Force (NPF) had been an off-shoot of the colonial police nurtured in the best form of British policing, but also structured covertly to railroad rebellious anti-colonial natives into jails. And then the colonial masters eventually left clearing the path for some indigenous colonisers who held our police officers by the jugular, engaging them in unprofessional and demeaning tasks of guarding banks which housed stolen money, serving as personal escorts and cooks for their wives and mistresses, and as security officers to private fiefdoms. High-ranking police officers also used their low-ranking counterparts as ‘tax collectors,’ as we have it, in that they would mount roadblocks at strategic traffic points to collect bribes from fellow citizens going about their normal business. If these citizens refused, they were dragged to police stations where they were tortured on the orders of the shadowy ‘Big Oga,’ and made to pay twice the bribes earlier raised.

As if to divert attention, it was with bated breath that we welcomed the introduction of the Special Anti-Robbery Squad (SARS) which as we were told, was set up to put a stop to the notoriety of violent armed robbers and cold-blooded murderers who had placed the country in a stranglehold. The menace posed by killer gangs all over Nigeria was so persistent that we thought it was a way of life. Gradually, we were to applaud the intervention of these SARS officers, as they destroyed the hideouts and satanic network of these criminals to the point that when they – these criminals – were arraigned, our stomachs churned for days on end as they rendered gory details of their evil machination and how they hacked down fellow citizens simply for the greed of money. However, the notoriety of the country as one where virtually nothing works was to eventually rub off on these police officers, as every Nigerian youngster suddenly became ‘crime suspects.’ Once you are seen as well dressed and are perhaps brandishing a lovely mobile phone, you are classed without proof as a fraudster and subjected to indignities. Like a scene taken straight from a horror movie, these officers soon metamorphosed into killer gangs inflicting all manners of cruelties on Nigerian citizens that they were constitutionally obliged to protect. In short, they were above the law – and went scot-free after every heinous crime until we couldn’t take it any longer.

In this vein, I see the ongoing protests as commendable and one that has long been overdue. I also make bold to say albeit with pain in my heart that the modus operandi – as it evolves presently – is not only counter-productive but antithetical to what peaceful protests should be. My reasons are not far-fetched: Some weeks ago, some of these protesters, armed with guns, machetes and pickaxes stormed a prison in Benin City – (Midwestern Nigeria) – and set the inmates free. Those set free were hardened criminals: rapists, diehard cultists, armed robbers, killers, fraudsters and their ilk. Now, that city is currently in topsy-turvydom, the state-of-affairs taken over by mayhem and burning of police stations, looting of private businesses and the lynching of fellow citizens. Isn’t this what we are accusing the SARS officers of or is this a brand of our own so-called ‘home-grown’ revolution? What a shame! We should beware of the consequences of our actions as this may provide grounds for our ideologically-deficient policymakers themselves, to say that the protests have been hijacked by ‘enemies of Nigeria’ – and we – the protesters would be in for worse troubles, our bodies baton-whipped by these oppressors in police uniforms, and the noose already placed around our necks tightened to a breaking point.

If we do not have any hidden agenda and genuinely want our grievances addressed, then I think we should imbibe the hallmarks of the 2003 Rose Revolution in the former Soviet State of Georgia, where protesters armed with mere rose flowers and led by a certain Mikheil Saakashvili overthrew an undemocratic government. In Ukraine too, there was the Orange Revolution, where a series of general strikes coupled with a campaign of civil resistance led by orange-clad demonstrators resulted in a rerun of a massively-rigged election which resulted in the restitution of the stolen electoral votes to the opposition leader and winner of the election, Viktor Yushchenko. Even at that, the current Chilean model of sit-ins and the apocalyptic clatter of spoons and cooking pots as a form of civil disobedience is also worthy of emulation. No wonder the tactic worked well and paved the way for a referendum on a new, people-friendly constitution replacing the draconian, anti-women version they – the Chileans – had been subjected to for over forty years when that country’s late dictator, General Augusto Pinochet, the acclaimed “Butcher of Santiago” bared his fangs and went on a killing spree of real and imagined opponents.

Secondly, these protesters so far have no leader or any visible representative who would under the circumstance negotiate or dialogue with the government for things to be put in place. What I hear on the grapevine is that they are going it all alone because they fear that any leader so chosen may betray them. While this is unfortunate, I think they should elect a representative from amongst them as events unfold else their efforts might come to nought. Worse still, President Buhari who has already gained infamy for rubbishing all that has to do with youth advancement might label them “misguided troublemakers” and order his soldiers to go on the rampage. Even at that, is it not true after all that a rudderless ship soon capsizes in moments of turbulence? So it is with a flock of sheep without a shepherd. They would scram and scatter heading to nowhere. So, I call on my fellow compatriots to adopt a commonsensical approach to the issues before us. It is not too late to change the tactic and resort to peaceful protests and constructive dialogue even if it takes us years to achieve our goal. The late Chief Palestinian negotiator, Saeb Erekat once said that “five years of dialogue is better than five minutes of bullets.” Nothing can be truer than this. Also, why the present SARS should vamoose for their oppressive nature, we should aim to negotiate for a more people-friendly equivalent built on sterling principles, ethics, integrity, professionalism and respect for fundamental human rights. In this same vein, our crumbling infrastructures should be revamped and jobs created for our army of jobless university graduates roaming the streets. I don’t think these demonstrating youths are really asking for too much: they just want free or affordable education, potable water, electricity, access to medical facilities provided by the State – and to our poor parents – a cure to the current scourge of malaria.

Nigeria is often described as “God’s experiment in the impossible” in view of the calibre of her policymakers in their profligate lifestyles and lack of empathy for the suffering youths.  Will they rise to the challenge at this critical time of our existence to put things right for the downtrodden masses?

Martins Agbonlahor is a novelist and journalist based in Manchester. His new novel: Another Poor Cow: The Dangers of Tradition in Rural Nigeria, is available in all online bookstores.