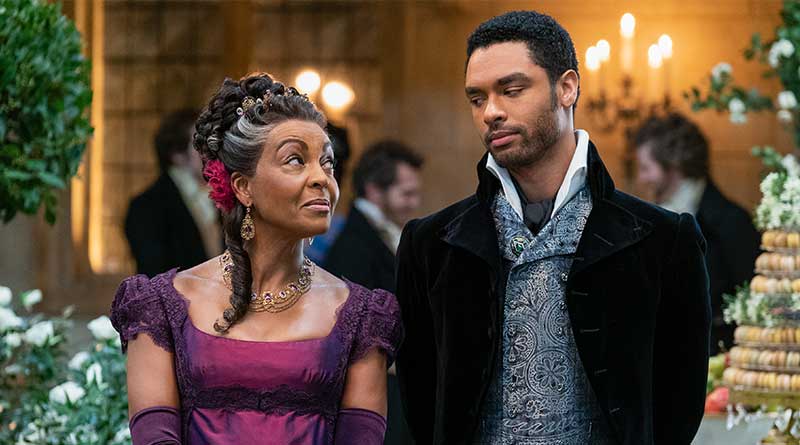 The hotly anticipated Netflix blockbuster, Bridgerton, is due to hit our screens in December 2020. British actress, Adjoa Andoh, plays the role of the acerbic and formidable Lady Danbury, the dowager who runs the town. Akosua DF caught up with Adjoa to talk about her life, faith and career.

Akosua DF: For the benefit of any of our readers who may not know you, please would you tell us a bit about yourself?

Adjoa Andoh (AA): I am one of two siblings. I am married and have three kids. I grew up in the Cotswolds in Gloucestershire, and before that we lived in Leeds. I was supposed to be a lawyer because I am a “good Ghanaian daughter” [switches to Ghanaian accent].

ADF: I was going to get to that!

AA:  I always wanted to be an actress.  I was the kid, who made other parents pay money to come sit and watch hours of dramas performed by their children. I was a bright kid; I wasn’t very sporty, but I was intellectual. I moved to Bristol to get my law degree, and joined a Black women’s group.  That was the first time I heard of Black women authors – it was fantastic.  In the group, I met an American woman called Deborah, who would later be instrumental in getting me started in acting.  When I packed in my law degree, I did two things: the first was to go and see my head of department, to inform him that I was leaving because I wanted to be an actor. I told him I was interested in the law as far as it protected people, but not as far as you could use it to write people off or tie them into horrible contracts. The second thing was, I went to Deborah’s acting classes and that was wonderful.  She received funding by Ken Livingstone in 1984 to do one of her shows, and she invited me to London to audition. She had to teach me how to audition, as I was a novice. I auditioned, got the job, left Bristol, moved to London, and never went back.

ADF: Being a Ghanaian myself, I recognise what a bold move that was for you. Back then, every Ghanaian parent desired their child to be a doctor, lawyer, pharmacist, engineer or accountant. Arts, entertainment and sports were deemed as ‘hobbies’ and not lucrative careers. I am certain your parents are extremely proud of your accomplishments now, though. You are a fierce campaigner for social and racial justice. What role do you think the Church should play in aiding reconciliation?

AA: I would say the whole point of faith is about bringing the Kingdom now – ‘Thy kingdom come’ – so for me, I feel justice and reconciliation are what we should be aiming for, and we need to find ways in which to make that happen effectively. Sometimes that might be to overturn the tables in the temple, and other times you have to hang out with the tax collector. There is no love or peace without justice. I couldn’t be involved with a faith that didn’t take that on.

ADF: I agree. Amos 5:24 does admonish us to ‘Let justice roll down like waters’. Let’s move on to your current project that’s due to come out at the end of this year on Netflix. How did you land the role, and what drew you to it?

AA: Well, I guess I landed the role, like you do. I went up for it; I learnt my words, and they liked it.  It was a funny one, because I was filming ‘Silent Witness’ at the time.  This is what always happens: you’re doing one job, and then you’re asked if you can go and audition for something else. We were filming a plane crash, and were on location, with debris everywhere. It was a really complicated set-up, and there was no way I couldn’t be there that day. My character had to be there; they were not going to recreate the set just for my character.  There was, however, a lovely director who put all my scenes to the top of the day. We shot all my stuff, and somebody drove me to central London for my audition. The casting director kindly waited till the end of the day to enable me to audition.

The reason I like the part is because of my character, Lady Danbury.  She runs the social world.  She is a friend of the Queen; she’s of high standing, and is probably in the best position a woman in that era could be.  She’s widowed, so there’s no husband telling her what to do, plus she’s got a ton of cash and is very high up in society. I had great fun with Lady Danbury; she’s stylish, she has a top hat and fabulous clothes. She can sniff out anyone who is a bully or arrogant, and she can sniff out smart young girls who need encouragement. She is great fun to play. But there is also a tenderness to her, and a sadness about her past, and we get to see some of that.

The least rewarding bit of playing Lady Danbury, for me, was probably spending hours in wigs. Getting the wig caps, pins and all sorts in place wasn’t the most exciting. Apart from that, it’s been a real treat to play her.  You don’t normally see people who look like me in historical costumes and drama, but the show is a co-production between Netflix and Shondaland (Shonda Rhimes). The series, Bridgerton, is based on a number of novels by Julia Quinn, which are all about the Bridgerton family. I hope it will be a real page-turner, in terms of TV dramas.

ADF: Oooh, now you’ve made me even more eager to watch the series in December. OK, I always love to throw in a fun question during my interviews, so here goes: Which artists are currently on rotation in your playlist?

AA: I don’t have a playlist, because I am from the cassette generation, but I do know what I’ve been listening to recently: Mary McCabe’s first album. I’ve also been listening to Snarky Puppy – they are a band of amazing jazz musicians. Their keyboard player (from the era when they first started, which is the era I really liked) is Cory Henry. He was the keyboard player from the Brooklyn Tabernacle. When I was working in Brooklyn (touring with the Royal Shakespeare Company for African Julius Caesar) I went to the Brooklyn Tabernacle because of the music.  Another guy I am currently listening to is Lewis Taylor; he is a North London White boy, who sounds like Marvin Gaye. He was around in the 90s; his stuff is soulful, crazy and fantastic.  I’ve been listening to them a lot, partly because I am directing now, and want to use their music in my show.

ADF:  So what’s next for Adjoa Andoh?

AA:  I am about to direct two shows – a series of monologues that are going to be filmed in a theatre and then put online. They are based on Greek heroines. Fifteen female writers have taken 15 Greek heroines and written monologues for 15 actresses, and I am directing six of them.  I am also pitching for two movies: one that I am writing the screenplay for and producing, and the other that I will be producing.  They are both about extraordinary Black women.

ADF: Many thanks for taking time out to chat with me. The Keep the Faith family wish you great success with Bridgerton and with your future endeavours.