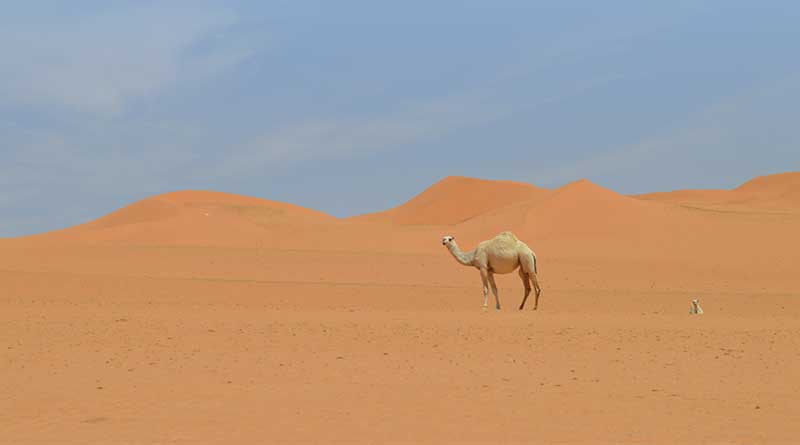 Friday midday, and the huge ball of light in the middle of the clear blue sky is radiating its heat and bright light. With massive palm trees and colourful flowering cactus plants in a peaceful garden, it could be anywhere in the world, but this quiet oasis was not a typical sight for most people; it was only for special guests.

In the first 10 weeks of my contract, I felt very isolated and alone. There was no social life, theatres, cinemas or bars in which to meet people, and I was looking forward to the end of my 12 weeks in Riyadh.  My contract was coming to a close in December, but not a single Christmas tree, bauble, Santa or decoration was in sight; my only break from work was in the Sheraton Hotel, still garbed in the abaya and scarf, where afternoon tea was my treat (no alcohol, of course). I saw a group of Western ladies from various countries having lunch, and from them I learnt more about what to do, what was possible, and where to go in the next hour than I had in the previous ten weeks.

Loendi, a lovely South African lady, invited me to a walk in the desert the next day. This was illegal, as men and women (who are not married) mix together there. It is an abaya-free zone, and an excuse to be out of my hotel room. The wonderful beauty of the desert has never left me.  While we were out walking, she asked me whether I had been to a ‘Special Meal’ in the British Embassy.  I hadn’t, so she explained that, although church services of any type are forbidden and illegal, people met in the safety of an embassy or consulate.  Once again, she invited me. I don’t know how she managed to get me onto the security list for the next day, but she did.

Entering an embassy, you have to go through a variety of military and police checkpoints with your passport and visa. There are no mobiles allowed inside any embassy. The Diplomatic Quarter, where all the embassies and consulates are, was an abaya-free zone that has changed since. During my first visit, everything seemed daunting and unreal; I would never get invited to any events in embassies in the UK.  As I entered the British Embassy for the first time, going through the security check and being ticked off a list surrounded by machine guns – whilst knowing I was doing something illegal – was scary.

Through the barriers, in that calm garden, my heart started to slow and my temperature lowered. When I opened the door of the lower building, I was greeted by some amazingly familiar sights: a polished wooden cross with Jesus, garlands, flowers, music, candles… and happy people.  I hadn’t realised until then how much I had missed all of this.  There were people from all over the world – all ages, genders and creeds – but the atmosphere and passion were tangible. I spent most of the service in tears, but I couldn’t say why.  Communion was held – not with wine – but the kindness, hospitality and openness of these people was something I hadn’t seen in all the previous weeks of being in Saudi.  After the service, I sat and had lunch with some people and we exchanged phone numbers.

In the following week, people called to ask how I was, and whether I wanted to meet for a coffee. Life was different. In that week, my employer also asked me to extend my contract for a further six months; I wouldn’t have considered that a week before, but now I had some amazing support, and even looked forward to the coming months.

The following week, I attended a Christmas party at the American Ambassador’s residence that could easily have been in Hollywood. The carols, the choir, the grand piano, the festivities – all by candle-light – were the start of a new reality for me. The atmosphere, gratitude, attitude, warmth and sincerity of people based in faith really opened my eyes and my heart.  I was raised a Christian, and had always taken comfort from Jesus and prayed, went to Sunday school, took my mum to candle-lit Christmas services, wore the crucifix she had bought me, etc, but I wouldn’t say I had been very church-based in my life as a general rule.

My stay in Riyadh was actually extended to six and a half years in the end, most of which I would say was down to the people I had met through the church connections there.  There were many events, activities and services arranged in many of the embassies, but the invitation was always to a Special Meal. In all, they were all very special for me. The solace and friendship I found there, like so many others, shows that faith is stronger than any man-made environment, laws or buildings.

‘For the Sake of the World’, pray, Church, pray! by Victoria Fagg

Israel and the Church: What is God’s Plan?