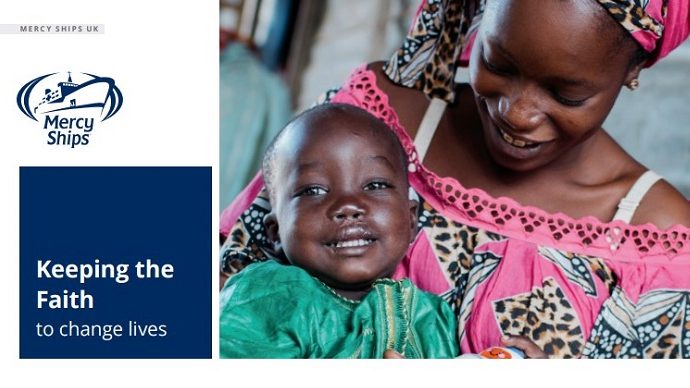 Following the 2000-year-old model of Jesus, Mercy Ships exists to bring hope and healing to the world’s poor – hope for children like Saliou. Like so many other babies around the world he was born with a cleft lip.A lack of access to safe, timely, and affordable surgical care prevented Saliou from receiving the healing he needed – an issue faced by two-thirds of the world’s population.

“I didn’t have anywhere to get an operation, I was just waiting for an opportunity,” said Saliou’s mother. “When I heard about the ship’s arrival I was relieved, I decided to stop everything and bring him because this will impact his future.”

What should have been corrected for Saliou at 3 months was left unresolved, resulting in a potential future of
rejection and ridicule. Saliou is not alone. Five billion people are unable to access simple surgery that can save their lives. Chief Medical Officer
and lead surgeon for Mercy Ships, Dr Gary Parker, often gets asked how he thinks he can make a difference to such global problem:

“I needed clothes and you clothed me, I was sick and you looked after me, I was in prison and you came to visit me… Truly I tell you, whatever you did for one of the least of these brothers and sisters of mine, you did for me.”

It’s through this commitment that lives are changed every day onboard the Africa Mercy, where the volunteer crew strive to be people of integrity and excellence whilst loving and serving their community. Thanks to these values, Saliou was healed, his future restored and his life changed forever:

“I was not worried”

said Saliou’s mother, as the young child was taken into the operating room,

“I was just happy. It was based on faith.”

Faith has played such a key role in the work of Mercy Ships over the years and has seen a vision of better access to healthcare become a reality for thousands of people for over four decades. Thanks to supporters across the world who also believe in the life-changing work of the ship, faith has
helped fuel the launch of the new purpose-built surgery ship, the Global Mercy.

As the largest floating hospital and first of its kind in the world, this ship will provide more of the unquantifiable hope and healing for which Mercy Ships are known. Doubling capacity, the Global Mercy will see more lives changed and even more patients like Saliou healed from preventable conditions thanks to the volunteer crew that keep these ships afloat.

This year we’re hosting a very special Christmas carol concert. We might not be able to be together in person, but that won’t stop us meeting together in spirit! Tune in to TBN on Wednesday 16th December for a televised carol service, featuring Chief Medical Officer and lead surgeon, Dr Gary
Parker. Visit: www.mercyships.org.uk/christmas-2020

The Value Question by Keno Ogbo

Free church resource welcomes everyone into the Christmas Story this year