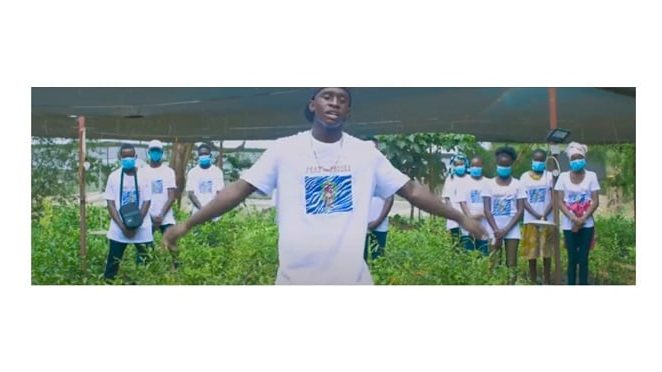 Kenya’s rising rap stars, Anderson Mwakazi (aka Harshkid Luckystah) and fellow artists Benard Kaisa (aka Benkaizah) and Simon Mwanjala (aka Popsodah) released ‘Pray for Nature,’ a new music video with an urgent message for the world about the Climate Crisis and the critical need to stop forest destruction.

Deforestation is the second largest contributor to the Climate Crisis. The Intergovernmental Panel on Climate Change (IPCC) – the United Nations body for assessing the science related to climate change – warns that deforestation intensifies the effects of climate change, such as water scarcity, drought and food shortages. Billions of people will be adversely affected and especially those living in rural parts of the world who depend on farming to feed their families.

Anderson Mwakazi lives in the Kasigau Corridor, a severe drought region in SE Kenya, located between Tsavo East and Tsavo West National Parks – a vital wildlife corridor. Anderson’s family and neighbors are subsistence farmers. He knows first-hand how burning and cutting trees to clear land for farming and for charcoal production has a direct negative impact on the rain and farming conditions. Thus, his new song and music video seeks to inspire environmental activism.

“My generation is increasingly anxious about the climate crisis- we don’t know if our lives will be cut short or if current harsh conditions will get even worse. It is overwhelming and causing young people serious depression. Climate scientists have been warning our leaders since before I was born but unfortunately for us, they have not acted. I wrote this song as a wakeup call for young people to stand up and demand that corporate and political leaders take immediate action to do what’s right for the children of the world before it’s really too late,”

The Kasigau Corridor is also home to Wildlife Works, a leading conservation business focused on protecting forests, wildlife and sustainable development for local forest communities. The company with its 350 local employees and with the cooperation of 120k community members, protect the entire 200k hectare corridor.

Wildlife Works far reaching community engagement activities include youth education on environmental issues held at local schools, many of which have been built or refurbished by Wildlife Works and where thousands of children have and continue to receive scholarships covering their school fees. Anderson first learned about climate change and the importance of protecting trees from the community outreach leaders at Wildlife Works.

“Deforestation causes a direct threat to our survival in rural Kenya but it’s not only a local problem, we all share the atmosphere that doesn’t care where emissions from burning forests come from so this is also a serious problem for everyone in the world. I hope our song Pray for Nature will help people remember to have more respect for nature”