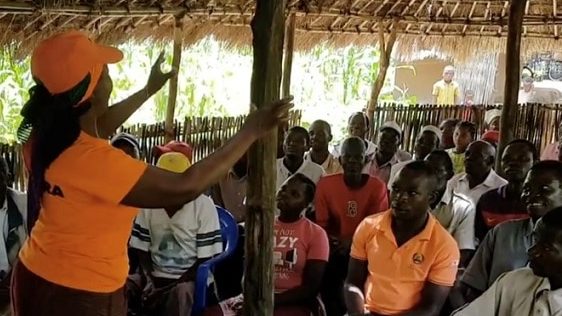 Leprosy is the oldest disease known to humankind, and one often thought of as confined to Biblical times. But did you know there are almost a quarter of a million new leprosy cases diagnosed each year? For almost 40 years there has been a cure for leprosy. But for every person treated there are a hidden 20 needing the cure.

Leprosy shouldn’t be a 21st Century disease. While there is no denying it is difficult to eradicate, mercifully Jesus gave the ultimate example of how to go about it. In Chapter 5 of Luke’s gospel our Lord not only gives physical healing to the man who begged him to ‘make him clean’, but emotional and social healing.

The Leprosy Mission says both improved access to healthcare and a sea change in attitudes is needed to end leprosy in countries like Mozambique. The disease hides in remote villages like Namatua in Cabo Delgado, Mozambique’s most northern province.

There are no doctors in Namatua, and medical care is scarce. Without prompt treatment leprosy can disable and even lead to blindness. Leprosy is also shrouded by fear and misunderstanding. People with the disease all too often face extreme discrimination. Zaina, who lives in Natmatua, knows only too well what this is like.

The Leprosy Mission is raising up people like Zaina to become Leprosy Changemakers, to lead the fight against leprosy. Together they are overcoming fear and paving the way for a Mozambique free of leprosy and discrimination.

Zaina was shown God’s unconditional love through the kindness of a stranger. Forever grateful, Zaina’s love for others walking the same path as her knows no bounds. She goes the extra mile to find those who are hidden away and fearful so that they too have the freedom of a new life.

Zaina was a young mum when she first noticed discoloured patches on her skin. She didn’t know what they were, but when they became visible to other people in Namatua, they recognised the signs of leprosy. Because of age-old myths surrounding disease, some of the villagers banished her to the forest, chanting “go to the bush” over and over.

Together with her young son, Zaina was forced to live in the forest. If that wasn’t hard enough, a group of villagers came to take her little boy away. Zaina was heartbroken. Hungry and without medicine, her body became increasingly weak.

By the grace of God a stranger found Zaina in the forest. He built her a hut to shelter from the rain and took her to a health post where her leprosy was cured. Leprosy Changemakers were able to go to Namatua and teach the villagers about leprosy.

Zaina is now a thriving member of her community. The unconditional love she received changed her. It inspired Zaina to change the lives of others. Determined they shouldn’t have to suffer a similar fate, she trained as a Leprosy Changemaker. Zaina is able to recognise the early signs of leprosy and has made it her mission to encourage others affected by the disease to not lose hope.

“I say to someone with leprosy that they should take care of themselves,” she said.

“They should take the medication because this disease has a cure. They should bathe, wash their clothes, brush their teeth and carry on living. They must realise they will get better.”

Religious leaders and traditional healers are also joining the fight against leprosy. They too are training as Leprosy Changemakers. Church leaders and Imams have deep and trusted relationships with the communities they serve. As well as appearing in the Bible, the story of Jesus healing a man with leprosy features in the Quran. What better message is there than Jesus welcoming this man back to the fold. In doing so he is challenging an ancient myth that a person with leprosy is somehow cursed.

Traditional healers also have incredible power to influence their communities. For every medical doctor in Mozambique there are 50 traditional healers. In rural villages like Namatua, this is the first port of call for someone needing medical care. Leprosy Mission teams all too often hear of someone with leprosy being prescribed a special bath as a cure. When this doesn’t work, people then consider medical help, but it’s not easy to find. As a result, valuable time is wasted before receiving the cure for leprosy, leaving the person at risk of avoidable disability.

But things are changing. With traditional healers becoming Leprosy Changemakers, they too can refer suspected cases of leprosy to a government health supervisor.  A fast diagnosis can be secured and, crucially, the cure given.

The Unconditional Appeal has been awarded UK Aid Match, meaning every pound donated before 24 April is matched by the UK government. Visit unconditionalappeal.org.uk to find out more or donate.