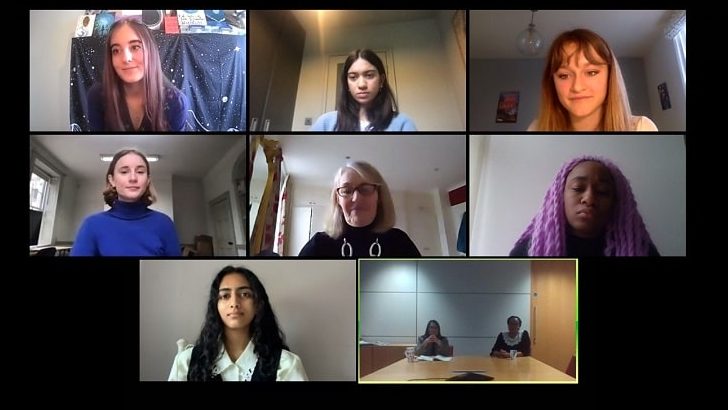 Home Secretary Priti Patel met with young women from Plan International UK’s Youth Advisory Panel and Our Streets Now to discuss their views on preventing violence against women and girls, and their reasons for campaigning on this topic.

The Government’s Independent Advisor on Tackling Violence Against Women and Girls Nimco Ali joined the discussion.

“You have given a voice to an issue that many people aren’t brave enough to campaign for and speak out against.

“I cannot stress enough the level of commitment and passion that Nimco and I share to drive this agenda on tackling violence against women and girls forward.

“To ensure our new strategy reflects the views and experiences of those we want to support, we’ve launched an important call for evidence. We don’t just want to hear from organisations, I want it to be personal. I want people to feel empowered to come forward and share their lived experiences.”

“It is incredibly brave to share your stories. I, as a survivor, a feminist and a woman, hear you.

“One of the key things I want to achieve in this role is not just eliminating violence against women and girls but the fear, because that is corroding your lived experience when you as a citizen are enjoying the right to be who you are.

“I want as many as you to fill out the consultation as possible, as the best way for government to hear you is to fill this out so we can make our voices heard collectively.”

Jess, 20, from Cheshire, who participated in the roundtable, said:

“Today’s meeting with the Home Secretary to discuss the violence that women and girls face on a daily basis went really well.

“It was also great to hear the Home Secretary agree that sexual harassment is unacceptable.

“With cultural and legal change, we can make a real difference to girls lives up and down the country and ensure that our generation is the last generation to experience abuse.”

Plan International UK is a global children’s charity who work to create a just and equal world for girls. They are running the #CrimeNotCompliment campaign on public sexual harassment in partnership with grassroots youth organisation, Our Streets Now. The campaign co-founders, sisters Gemma and Maya, spoke about their personal experiences of harassment and why they are campaigning on this issue.

The call for evidence is open until 19 February 2021 and can be found here: https://www.gov.uk/government/consultations/violence-against-women-and-girls-vawg-call-for-evidence