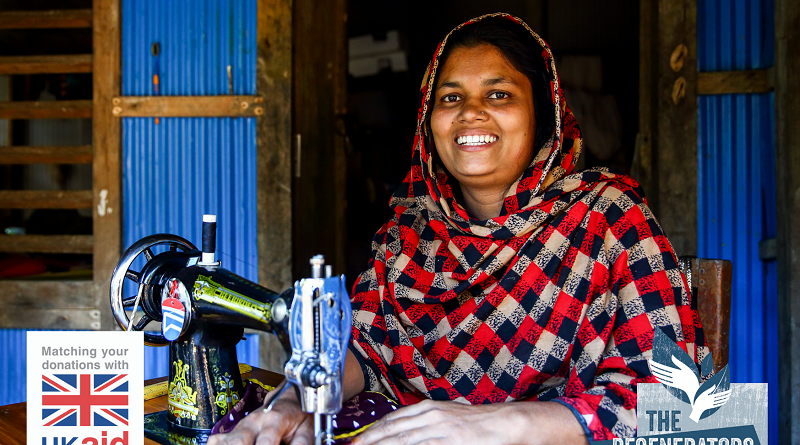 A North East development charity has launched a new appeal to support thousands of people fighting back against the climate crisis in poorer countries. Traidcraft Exchange, a Newcastle based charity who help vulnerable people in Africa and East Asia to get a fair deal from trade, have launched their Regenerators Appeal and they need public support to help change lives.

The charity have been awarded UK Aid Match, where every public donation made to the Regenerators appeal between 8th March and 7th June 2021 is matched by the UK government.

“Climate change is destroying the livelihoods of people living in Tanzania’s vulnerable coastal communities. The UK government will double
the public’s generous donations to Traidcraft’s appeal, helping those most at risk from the effects of climate change to build resilience and adapt to our changing planet. By working together, we will make double the difference.”

“The Regenerators appeal will help those on the frontline of the climate crisis fight back against increasing droughts and floods by using green technology and growing new, climate resistant crops and planting trees to protect their land and livelihoods”

Traidcraft Exchange’s Regenerators appeal is part of the government’s UK Aid Match scheme. By matching donations to Traidcraft Exchange’s Regenerators appeal, UK aid will help thousands of people in Tanzania, Kenya and Bangladesh get the skills they need to set up climate smart businesses so they can improve their incomes and regenerate the land they rely on for future generations. By investing in green technology like irrigation,
greenhouses and solar panels, and switching to climate resilient crops, farmers will be able to create better futures for their families and communities, and earn more for the hard work they do every day.

For people like Monira from Bangladesh, living on the frontline in the battle against climate change means earning a living is increasingly challenging. Monira’s house and farmland have been swept away by frequent cyclones, and earning even a basic living has become challenging. But thanks to a project run by Traidcraft Exchange, she has joined a farmers group and is taking action.

“We learn and understand something new from this project in every meeting. This project is changing our lives and making us aware about climate change. We are trying to plant trees. We are trying to build our houses stronger and on a higher place. We no longer want to be dependent on agricultural work only. We are trying to learn different skills of income. Together when we stand side by side, we are able to deal with many problems. We can help each other with wisdom; we can deal with any danger together.” Monira.

With the help of the UK public, Regenerators like Monira can come together to fight back against climate change – by planting trees, reducing plastic use, and switching to alternative fuels and climate resilient crops. Alongside this, they can come together to find new ways to earn a decent living, and save collectively – meaning that when disaster strikes, communities are better prepared.

The Regenerators appeal will run from midnight on 8th March to 7th June 2021.

Why your name matters in the search for a job