Young Christians hoping to take their first steps into the media are being invited to apply to a new mentoring scheme being launched by Christians in Media.

The organisation is inviting Christians aged between 18 and 25 who are either in their first roles or hoping to get their first roles in the areas of print or broadcast journalism, PR, digital and social media or radio and podcasting to apply for the scheme.

There are up to six places available on the scheme, which will begin in June and run till December.

The Christians in Media Mentoring Scheme will see the young people attend equipping weekends where they will be trained in practical skills to help them in their future careers, as well as hear from experienced media professionals about what it is like to be a Christian working in the media.

As part of the scheme, each mentee will be matched with a mentor – an experienced media professional, who is also a Christian – and meet with them online once a month for the six-month duration of the scheme.

“As Christians, we long to see God’s kingdom outworked through the social, physical and spiritual transformation of our society. As media professionals, we recognise the impact that our newspapers, broadcasters and digital media can have for good on our nations.

“We believe that God calls each of us to be salt and light wherever we are. Our prayer is that increasing numbers of Christians will feel not just called, but equipped, inspired, motivated and supported to forge careers in the media in order to make a positive difference.

“As young Christian professionals embark upon their first steps into the media, we want to enable them to flourish in their careers, while also being grounded in theological teaching and leadership training so that they might make a positive difference in the media and the world, for the glory of God.”

As well as the equipping weekends and mentoring sessions, successful applicants will also have the opportunity to write and broadcast both for the Christians in Media website and social media channels, as well as take up opportunities with other media platforms.

Christians in Media is accepting applications through the website at www.christiansinmedia.co.uk/mentor, where applicants will be asked to write a 500-word essay or record a video to answer the question “what are the biggest challenges facing the media industry in the next 5 years, and how might Christians in Media respond to those challenges?”. The deadline for applications is Friday 7th May, with virtual interviews held on or around 13th May.

The mentor programme will kick off with a virtual weekend of talks and workshops over two mornings on the weekend of 5th and 6th June.

About Christians in Media

Christians in Media was started in 1967 and formerly known as the Church & Media Network. It is a UK network and community that supports, encourages and inspires Christians who work in, and with, media.

Through local meet-ups and a flourishing online network, it seeks to help Christians better understand how their faith and work interact.

Its mission is to see Christians in the industry flourish and become key influencers, to see churches engaging positively with the media, and to see the life-affirming Gospel message of faith, hope and love increasingly reflected in the UK media. 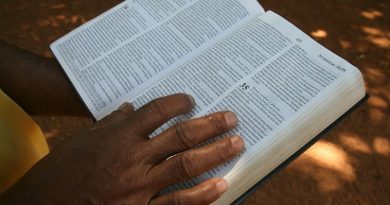 8 Things Your Bible Says About Itself