A man cured of leprosy has called time on the ‘L word’ including ‘from the pulpit and in political soundbites’.

The Leprosy Mission has renewed its call for the term ‘leper’ to be consigned to the history books after crosswords were exchanged over a crossword clue.

A media storm erupted today when the Chief Executive of The Leprosy Mission Scotland’s letter was published in the Church of Scotland’s Life and Work magazine.

Linda Todd said she was ‘dismayed’ to discover the implied five-letter answer to the clue ‘outcast’ in the magazine’s June edition.

The term ‘leper’ is an archaic term to describe a person with leprosy who has been ostracised from their community in the days before there was a cure for the disease.

Famously, the Gospels tell of Jesus healing a man with leprosy with a single touch giving complete physical, emotional and spiritual healing.

Mathias Duck was treated for leprosy in 2010 and is The Leprosy Mission’s Global Advocacy Manager.

Today the ‘L word’ is more commonly used as a term to describe a person who is strongly disliked and avoided by other people because of something bad they have done.

It is derogatory and harmful and there is simply no place for it. There are millions of people globally today with lifelong disabilities, including blindness, as a result of not receiving the cure for leprosy at the early stages of the disease. In fact, leprosy is the leading cause of avoidable disability.

One of the main hurdles stopping people getting treatment is stigma. They fear the term ‘leper’ and all that it stands for. It epitomises rejection and being thrown out of their families, communities and workplaces; the very thing they are afraid of and standing in their way of seeking treatment.

People use the ‘L word’ all of the time. Most of the time they do it because they don’t realise that leprosy still exists. I have seen it in TV shows, in songs, in books, and from leading politicians. We want to see this word banned completely from pulpit, to song lyric to political soundbite.

We are calling for this word to be banned not because we want to take part in a culture war, but because it is like every other word that we have removed from polite company: it hurts people.

I realise people say the ‘L word’ inadvertently without realising the pain it causes but it must stop now. The ‘L word’ hurts people affected by leprosy, just like other hateful words are used to attack people based on race, gender, sexuality, religion, disability, and nationality.

Mathias lives in Paraguay and works for The Leprosy Mission International, based in Brentford, Greater London. There are tens of thousands of new leprosy cases found and treated in South America each year. Evidence suggests that for every person given the antibiotic cure to treat leprosy, there are a further 19 that need to be found and cured.

I am a person affected by leprosy myself and it is painful to see the disease used as a synonym for ‘outcast’,

I am fortunate that my local community is forward-thinking on this issue, but I have heard from many friends who have not been so fortunate. When they hear people use the ‘L word’ around them, it is being used with hatred and scorn. Persons affected by leprosy work hard every day for a life of dignity and human rights for themselves, their families, and the wider community. For as long as people across the world are using the ‘L word’ in a derogatory way, people affected by leprosy are likely to face rejection from their communities.

Leprosy might not affect you directly, but it affects millions of people across the world, so I am asking you not to use this word anymore, out of respect for them and the pain it causes them. Instead, please use the term ‘person affected by leprosy.”

The Leprosy Mission has been campaigning to ban the use of the ‘L word’ for years. Hundreds of letters have been written to UK media outlets and high-profile people asking them to avoid using the pejorative term.

Its efforts saw the BBC change its style guide in 2010 to include that ‘leper’ is a derogatory term and should not be used. In 2011 The Leprosy Mission successfully appealed to Aardman Animations to remove a scene from their Oscar-nominated ‘The Pirates: In an adventure with Scientists’ which showed a character on board a ‘leper boat’ whose arm fell off for comic effect.

The Leprosy Mission is very grateful to Life and Work Magazine, who very graciously apologised for using the term and is now working to improve awareness of leprosy among its readership. 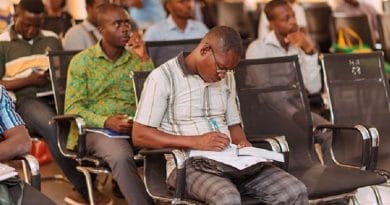