Blessing Annatoria, the 18-year-old Zimbabwean-born vocal powerhouse from Dudley, West Midlands – and The Voice 2020 winner – has released her debut album, Count My Blessings, via Universal Music, making her the youngest ever winner in the show’s history to release an album.

The album’s first single, ‘I Smile’, an uplifting and empowering interpretation of the Kirk Franklin original, was released in March, and saw Blessing make a triumphant return to The Voice 2021 final for its debut performance.

The gospel-infused Count My Blessings features a stunning selection of 14 songs, representing all facets of Blessing Annatoria as an artist. From re-imagined versions of her Voice performances and songs that have inspired and uplifted her, to hymns, which she has given a contemporary twist, Blessing Annatoria wants to bring different cultures together, spreading joy and happiness.

She comments: “I chose these hymns, because I have been singing them in church my whole life, and they mean so much to me and to so many people all over the world. I wanted to put my spin on them, and produce them in a new way to how people would have heard them before. I’m really proud of the album and in particular the hymns. ‘How Great Thou Art’ is my favourite hymn on the album, as I love the heavy beat and choir arrangement.”

The upbeat and bouncy ‘I Smile’, an anthem to joyful resilience and optimism, which has received fantastic support by BBC Radio 2, is the poignant first single of Blessing’s debut album, showcasing her soulful and show-stopping vocals. She is joined on the track by a remotely recorded choir, led by Kingdom Choir’s Wayne Hernandez – best known for performing at Meghan and Harry’s wedding and who has worked with artists, including Jay Z and Gorillaz. The album’s emotive and soul-stirring title track, ‘Count My Blessings’, which Blessing Annatoria co-wrote, is a rich melodic message about having faith, spreading kindness, and helping each other.

Representing her childhood and faith, the album also features three hymns with a close connection to Blessing Annatoria. As a young Zimbabwean, she grew up singing hymns in church, and has been surrounded by them all her life, which is why it was so important to her to include them on Count My Blessings, particularly the striking ‘How Great Thou Art’, which Blessing describes as her “family’s song”. All the hymns have been given a contemporary twist and are set to introduce a new audience to their uplifting powers.

The Voice fans will also be thrilled with the inclusion of a beautiful new version of Blessing’s winning song, ‘Angels’ by Robbie Williams; a powerful and emotional rendition of Westlife’s ‘Flying Without Wings’, as well as an electrifying re-imagine of Mariah Carey’s ‘Without You’, the track which secured Blessing her place in the final.

Still fresh in everyone’s minds, due to being crowned the show’s ninth winner only in November 2020, after a seven-month break in filming due to the pandemic, Blessing has firmly embraced this experience to show there truly is no stopping her. Recording her debut album remotely during lockdown with award-winning producer, arranger and songwriter Rupert Christie, who has worked with the likes of Jessie J, U2, Coldplay, Lianne La Havas and Lou Reed, as well as Blackbook Music, Blessing Annatoria is releasing Count My Blessings less than five months after winning the show.

Count My Blessings is out now. 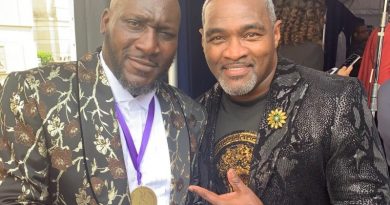