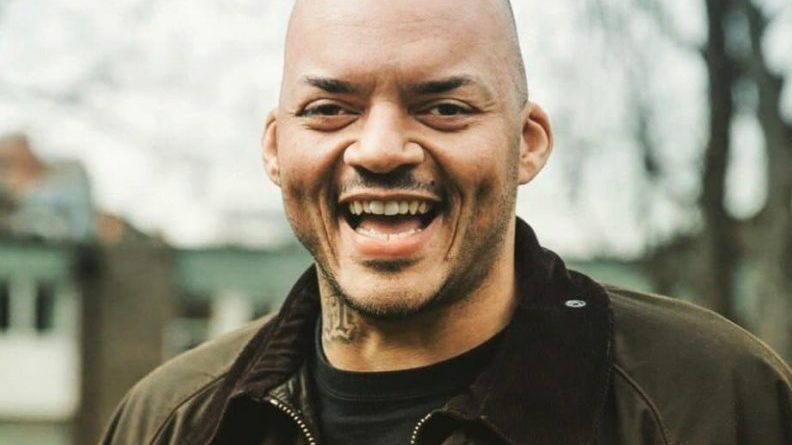 ‘From growing up in an abusive home to falling into crime and later finding Jesus, my journey has been a colourful one… I know that the Lord can use everything that has happened to me for his glory and that he has a plan and purpose for my life and for yours.’

Claud Jackson first held a gun in his hands at the age of 6. Now, over 30 years later, he is working as a curate, studying for the ministry and preparing to return to the same London neighbourhoods – but this time with a Bible in his hands. His story is one of poverty, abuse, drug dealing, and violence – and of a life turned round by a loving God who refused to give up on him.

Born in Clapham, the youngest of 6 siblings, Claud grew up in the shadow of domestic violence, with a London-born mum and an abusive and controlling Jamaican dad. He spent his childhood treading on eggshells, keen not to provoke the anger which his dad would regularly take out on Claud, his mum, his siblings, and their dog. ‘Terrible pain and darkness filled our lives on a daily basis’, Claud writes, with fear and anxiety being constant companions for him as a young boy.

When Claud was 6 years old, he held a gun for the first time – a 9mm handgun belonging to his older brother. ‘The gun possessed power, and as young as I was, I could feel it. I could feel its darkness and I could feel its strength’, he recalls. Claud hero-worshipped his brother, who left home in his early teens to become a violent drug dealer and was in prison by the time Claud was 7. When his brother came out of prison, he and Claud’s mum bought a shop, which his brother used as a base for shady dealings. Claud was struggling at school and, having been bullied, he learned to fight back, believing that ‘with fear comes respect.’ Meanwhile the family were living in poverty and had to move house regularly – at one point, Claud slept on the floor under the stairs. At school, he became ‘a spiteful, screwed-up bully’ and an outcast. When Claud was 12, he joined a new school where he was one of only 3 black or mixed-race children in a school of 700 pupils and experienced racism for the first time. Around this time, he started attending a Thursday night youth club with a friend and heard Brian Greenaway speak and read his book, Hell’s Angel, which awoke a brief interest in Christianity and even led Claud to ask the youth leader for a Bible; however, when he wasn’t given one straightaway, he became resentful and stopped going to the club.

Claud’s passion for football and his natural talent led to him being invited for a trial at Wimbledon football club at the age of 13. But, when his brother laughed at him for thinking he could make a success of football, his confidence was shattered and he didn’t attend the trial after all. Instead, he started smoking, drinking and doing drugs with his brother and his friends, and selling cigarettes to his schoolfriends. Underlying all of this was a huge desire to be accepted by other people – ‘I fully believe every person is responsible for their decisions,’ he writes, ‘but looking back, I was just a kid trying to belong.’ In the drugs world, ‘I felt accepted, that I belonged.’ But he also lived in a permanent state of anxiety with a sense that things were spiralling out of control. His brother became increasingly violent and was arrested again, leading to the first of many searches of their home, often in the middle of the night. Claud’s own cannabis habit – taking, buying and selling – increased. Then, when Claud was 16, his dad died. As much as Claud had hated his dad at times, he also loved him too – ‘it was my father’s bravery and strength that sustained us and, ever since his death, our family has fallen apart’, he writes.

Full of anger, Claud felt ‘I wanted to somehow pay life back for all the hurt it had handed out to me, but against everything inside of me that told me not to trust others, I still wanted desperately to belong.’ He became entrapped in a life of drug dealing, credit card fraud, and greed, with frequent run-ins with the police. ‘I wanted what was owed to me and I wanted it immediately,’ he recalls. Finally, the inevitable happened – Claud was arrested and, while being held in a urine-infested cell, he was told by police that he was likely to be going to court and to prison. In desperation, he prayed to God to get him out of the situation – and was surprised to be released home the next day while his friend went to prison. Soon the buzz of drug dealing and the risks involved had sucked Claud in again. By the age of 19, he owned a convertible sports car and saw money as the key to power. ‘This whole lifestyle was about hiding,’ he reflects now. ‘Hiding from my hurts. Hiding from responsibility. Hiding from hope that could so easily disappoint.’ When Claud was involved in a car crash outside a church, he met a West Indian nurse in hospital who talked to him about her faith and the need for him to know Jesus – while this made an impression on him at the time, he quickly sank back into depression, drugs, panic attacks, self-pity and poverty after his release from hospital. Now 21 years old, Claud and his mum were forced to live off bread, milk, tea, and potatoes – until his drug dealing business started bringing in more money again. Yet this ‘success’ was tinged with darkness as a number of his clients died due to drug-related issues; he responded by becoming increasingly emotionally detached, dating multiple women, and suffering a high level of paranoia.

When Claud was approached about becoming a mentor for high-risk young offenders for the local council, it initially seemed like a handy ‘respectable’ cover for his drug-dealing activities. However, he found that he really enjoyed it and, one day, he heard a colleague (Pete) talk about his faith and knew that he had to know more. Pete recommended the Alpha course – as it happened, there was one starting locally the following evening, and Claud was bowled over by the warm welcome he received. He really looked forward to the sessions and, one evening, ‘my heart dared Jesus to come into my life and make a change’, giving him a sense of deep joy and peace. Shortly after, he confessed his life of crime to the vicar, who encouraged him to get a ‘proper, full-time, permanent job’. Leaving his old life behind, he started to read the Bible and pray daily, and surround himself with people who would point him in the right direction. By the time the Alpha course had finished, the desire to sell drugs had completely left him.

Claud got a job as a barista and then in a supermarket, where he worked for over 3 years, rising to the post of assistant manager. He started to attend Holy Trinity Brompton, and successfully interviewed for a job at HTB’s homeless shelter, where he realized how quickly lives and fortunes can be turned around (for the worse). He was appointed as a church verger and started sensing a potential call to the ministry – as someone who had never done well at school, he was able to join the Peter Stream, a year-long course for those who ‘have sensed a call to ordained church leadership, but have felt themselves, for whatever reason, excluded from the process of discernment, selection or training’. During this time, he spent much time working with young offenders and other young people, mentoring young disengaged adults and visiting young offenders’ institutions, as well as holding weekly youth drop-ins at the church. In working with them, he recognised many of his own struggles as a young adult with issues of identity, self-worth, confidence, and need to belong, and the urgent need for positive role models.

Claud has now passed his Bishops’ Advisory Panel (BAP) and is in the process of training for two years to become a Church of England priest. Once ordained, he would love to plant a church and to work with young people to decrease gang culture and knife crime. As he approaches 40, he is deeply grateful for ‘God’s truly amazing grace [which] took a once successful London drug-dealing street trader all the way from deliveries to deliverance, from guns to God’.

One thought on “Claud Jackson: My Journey from Drug Dealing to Deliverance”