﻿With a voice that taps all cultures and crosses all borders, South African native C Sharp Mokeki is a Rhythm and Blues, and Soul and Gospel artist who is being applauded by audiences worldwide. His music is an artful blend of sounds with culture, and can collectively be summed up as inspirational. One of his latest songs “AFRICA” has a message of hope that rings true to people throughout the Diaspora. It could very well be embraced and received as an International Anthem for People of African Descent.

Gaining momentum around the globe, the lyrics to C Sharp’s signature song convey all that is pertinent to Africa, as well as the Diaspora. He has faith that “AFRICA” can unite people, and help to bring healing and hope to black people as well as people of all races. Passionately addressing the injustices of oppression and also the power of faith to overcome any situation, the lyrics to “Africa” are in English, as well as the Mother Country’s Zulu and Sotho.

“Listening to this song puts you in a reflective mood,” explains Kitty J. Pope, publisher of AfricanDiasporaTourism.com. ” At the same time, It gives you a feeling of hope and a sense of connectedness to people around the Diaspora,” she says. “This definitely could be an anthem for the entire African Diaspora. It is so inspirational as well as relevant. I am positive that black people everywhere can accept and appreciate the song “AFRICA.”

Even though C Sharp’s voice can be mistaken not to be from Africa, his rare talent is very much deeply rooted in African soil, His love for Africa and the Diaspora is evident when he belts out music from the depths of his soul.

To listen to and view lyrics to the soul-stirring, heartwarming song “Africa”: click here

C Sharp began his singing career in church at the tender age of 4 where music became his healing place for joy. Often writing lyrics as a prayer, he says that music became a healing place when he was broken. “Music has taken me through a journey of hopes and dreams. It helped me to keep believing,” he says.

Today he is among a few musicians who can sing a song that brings inspiration and hope to life at the same time. Because C Sharp touches the heart and soul with the same chord, his voice has the capacity to connect and resonate with just about anyone. Whether you are enjoying a live performance or just casually listening to his music, you’ll recognize a spiritual quality in his melodic voice that has the ability to uplift and unite.

C Sharp’s birth name is Setjhaba Mokeki. It is so befitting that Setjhaba means “Nations because his music has the ability to cross all countries and cultures. He got his musical name ‘C Sharp’ when a friend of his had trouble pronouncing Setjhaba and kept saying “C Sharp.” That friend had no idea that he was giving him his stage name, as ‘C Sharp’ is a note chord in music language. “It really speaks of what I do, and I felt that I didn’t need to explain it because it was all in that name. This also reminded me of how my grandfather used to call me “Morena wan Dinonyana” which means “King of the Birds” because of the heartwarming melody that he heard in my voice.”

Affectionately known as simply “C” to his friends and fans, his inspirational songs are always calming and uplifting. Upon listening to him, it might seem as though his silky, soothing, melodic voice rivals that of legendary U.S. singer Smokey Robinson. Or you might say that C’s angelic, crystal-clear voice sounds like the male version of the late great U.S. songstress Minnie Rippleton. Hailing from Soweto, this international award-winning recording artist, lyricist, and vocal coach, is also an author, and scriptwriter.

Raised on a farm with his grandparents, C Sharp grew up understanding nature and became a man of the earth. Singing from his heart as a child, he would sometimes move his grandparents to tears. He grew up close to his beloved grandfather who used to tell him: “You have a voice that soothes the listener’s heart and touches the soul. It does not matter what life throws your way, my son because you have a gift to weather the storms of life. Just sing!” Those words still stick with him today and have carried him through all types of situations. His grandfather has remained a source of love and guidance in his life.

Living through the trauma of apartheid, C Sharp has seen his share of injustices and struggles, which is why he sings songs of hope and inspiration. Through his grandfather’s example, he was taught to not complain but to have faith and dedication. It has been said that great artistry rises from the ashes of struggles, and C Sharp is no different.

He recounts, “I’ve experienced apartheid firsthand as a kid, when we would go to the city/town there were stores we were not allowed to enter.” Another memory that never left his mind was seeing a farm owner harass and drag a man to death for just trespassing. Not only does C Sharp sing about the journey of life, he also writes about it. He has written about some of his life experiences in his memoir “Imperfect Soul: Naked in Truth.”

His first solo record ‘Love & Hope’ was well received within the USA, Asia, Europe, and it was nominated for several music awards. To date, C Sharp has won at least five awards in the U.S. alone. “Love and Hope” can be heard on the radio in Asia, throughout Europe as well as in the US. As an international vocalist, C Sharp has performed on different continents including his own Africa, where he has mesmerized his brothers and sisters in Zimbabwe, Lesotho, Nigeria, Uganda, Kenya, and Tanzania, and Ghana.

He has been well-received all over Asia in such countries as Thailand, Philippines, India, South Korea, Malaysia, Vietnam, Cambodia, Singapore, and Laos. When performing in Asia, his fans just can’t get enough of him. His fans from all over Asia tell him such things as: “Your beautiful voice is so touching and soothing.” Some testify that they get chills just listening to him. Many fans from all over Asia declare that there is healing, peace, and tranquility in his angelic voice that pierces the soul. One fan told him that listening to him sing is like standing in a refreshing waterfall. Because his fans love his singing so much, he keeps getting invited back to different countries in Asia.

C Sharp continues to grace big music stages in cities around the world. He has performed before kings, presidents, and VIP officials. He even performed in Atlanta, Ga. (USA) for the Atlanta Matriarch of Civil Right Ceremony which was attended by matriarchs like Ms. Naomi King , wife of the late Rev. A.D King, brother of Martin Luther King, Jr. and Zenora Clayton, a foremost civil rights icon. C Sharp has also performed with other international artists for government and civic banquets, as well as humanitarian ceremonies around the world. C Sharp has penned songs for international charity organizations such as New York-based Ray Of Hope and Ghana-based “Africa Peace Festival” where he served as an ambassador and was labeled “The Voice of Love and Hope.”

His voice can be heard in different inspirational stage plays, and even aboard cruise ships. He continues to perform in South Africa every chance he gets. Not forgetting his childhood upbringing he still performs at churches and spiritual events. He loves singing and inspiring people so much that he can be caught just singing out of the blue at arts and crafts markets and even on street corners, where he draws an enthusiastic crowd every time. His gift of touching the hearts of people through song is the reason unplanned concerts pop-up all around him in public places where he sings.

African Diaspora Tourism publisher believes that C Sharp will one day be a sought-after singer for world-class dignitaries and heads of states, and that he will one day perform in special ceremonies or galas for the African Union and even the United Nations. “We at African Diaspora Tourism have chosen “Africa” as our theme song to help promote, not only our culture and heritage, but also harmony, understanding, and world peace. It is so fitting and becoming, and the entire Diaspora can identify with it,” explains Pope.

C Sharp says that he would love to sing for world dignitaries and world leaders to help bring people and countries together. I would like to be known as a singer for peace and unity.” His grandfather who aptly labeled and described his voice as unique, unforgettable, angelic, and pure, once said that his voice warmed all the chambers of the heart. Singing his heartfelt song “Africa” as an International Anthem for the African Diaspora would definitely make his dear belated grandfather proud. Proud, but not at all surprised.

Please listen to C Sharpe music and subscribe as a fan below : 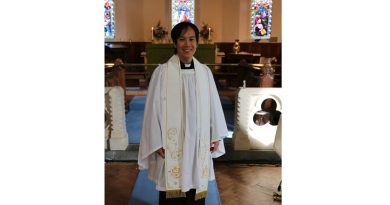 Soon to be vicar successfully crowdfunds for ordination stole