It was a harrowing scene, as the Guinean president, Alpha Condé (83), sat subdued, looking woebegone like a hen whose only chick had been swooped up by a ravenous kite. He was flanked by Colonel Mamadi Doumbouya and his gang of fierce, gun-wielding soldiers who had just overthrown his democratically-elected regime, sending fears into people’s hearts. Sounding unruffled, the arrested President smiled intermittently before the camera, as his captors may have ordered, but his disgust was discernible through that mirthless smile of his, not to mention the bland gaze.

Now, Colonel Doumbouya – the coup leader – is currently laundering his regime’s image and doing all he can to consolidate his grip on power. He reportedly told a shocked Guinean people that while power belonged to them, his military rule will be ‘brief,’ thus, harping on a popular chestnut in African stratocracies. ‘Field Marshall’ Idi Amin, Uganda’s ex-military tyrant had used the same phrase too. Upon overthrowing the democratic government of President Apollo Milton Obote in January 1971, he had announced to the Ugandan populace that he was just a soldier ignorant of politics, and that his regime will only stay ‘briefly,’ and then return swiftly to the barracks. That ‘brief stay’ was to snowball into eight (8) odd years of widespread corruption, extrajudicial killings, ethnic persecution of the Acholi and Langi tribes – and in short, a complete state of anomie. Other coup-plotters and military adventurers not enamoured of the time-worn phrase, are known to have adopted the semantically-related ‘provisional’ to fool the unwary. Nigeria’s late dictator, General Sani Abacha was a champion at this, for, when he and his psychopathic core of soldiers overthrew an elected government on that cold Harmattan morning of December 1983, he dismantled all democratic institutions, shut down our borders, silenced dissenting views and instituted a ‘Provisional Ruling Council,’ which stretched on for five years, the General, transmogrifying into a full-blown civilian dictator had Death not given him the sledgehammer. Yahya Jammeh of Gambia used his own ‘Provisional Ruling Council’ to ride roughshod over the Gambian people. Where this law-making Council of his was only to be ‘provisional,’ he made mincemeat of that term and held Gambians by the jugular for twenty-three harrowing years, first, as an iron-fisted soldier and then as ‘elected’ president until he was defeated in an election he had himself, orchestrated to win. He is presently declared persona non grata in The Gambia, while enjoying his loot in Equatorial Guinea, another African country.

Deciphering the actual intent of African coup-plotters seems not farfetched. It is wrapped up in this diabolical theory: ‘Do what you like in actual practice, but express it in benevolent language.’ Colonel Doumbouya – the unelected ruler of Guinea – is used to siege mentality and the garrison ways of the barracks – and therefore, devoid of all ideas and tenets of transparent governance. Democracy is not soldiering, where those who would not obey the last order are whipped into line like a herd of cattle. It is far more than that. In this vein, therefore, Guineans must not give in to the colonel’s web of tangled lies and time-buying tactics. I heard he released some prisoners. Yes, but this small-time measure must not derail Guinea’s democratic growth which has just been truncated by the ill-informed coup plotters. The opposition parties in the country must scrutinise the sheer machinations of the new regime before they parley with them. To the opposing politicians: this is the time for you to take a stand and save your country. Swift return to democracy and civilian rule must be on the table as well as the coup leader explaining in clear, unambiguous terms, the length of his touted ‘brief’ tenure. To take this further, it is high time all African countries jettisoned overboard military incursions into our politics. I find these khaki-clad adventurers abhorrent, not least their thirsts for blood and wanton wastes of our human and natural resources. See what they’ve done to our body politic: General Mobutu robbed Zaire blind, leaving her reeling in penury; Nigeria’s Babangida democratised corruption and railroaded critics into jails; Samuel Doe instituted a reign of terror and theft of Liberia’s resources; Idi Amin elevated physical torture of real and imagined opponents into an art; Ethiopia’s Mengistu Mariam massacred those with dissenting views; Siad Barre’s tribal politics in Somalia pushed the country swiftly into economic decline. In fact, their monstrosity goes on and on ad infinitum. Stratocracy, I think, should be a relic of the past. In this vein, the African Union (AU) and the Economic Community of West African States (ECOWAS) must save Guinea from the stranglehold of Colonel Doumbouya and his ravaging goons. Strict ultimatum must be given to the coup plotters to return the once-peaceful country to its status quo ante, including the immediate unconditional release of Alpha Condé, the former president. If the gentleman is guilty of any offence, he should be arraigned before the courts. That’s what the judiciary is for. Kidnapping him for any reason at all amounts to wanton brigandage and mindless thuggery. The rule of law must not metamorphose into the rule of the gun. Consequently, all lovers of mankind and democratic values must condemn this coup in the strictest terms.

While sacking Guinea from the African Union (AU) has been proposed, I believe other African leaders should take this further and resuscitate the moribund ECOMOG Peace Force, a multilateral armed force of West African countries, which had played a significant role in Liberia and Sierra Leone’s internecine wars of the nineties. Ghana and Nigeria should initiate this. I reminisce on military adventure in African politics and my heart beats a wild tattoo. The regime of Colonel Doumbouya will be as worse as that of Jammeh and Mobutu combined despite his stream of sanctimonious promises. I fear for the Guinean people who are presently suffering hardship and intense poverty. If the country’s present military regime shuts its face to the blizzard of criticisms from the European Union, the US and others – and turns Guinea into a dictatorship, then it will be the beginning of the end for the country. There are already bands of diehard terrorists in the neighbouring country of Mali, and I fear they may cross the border to browbeat teenage Guineans and other defectors into enlisting them in their jihadist wars.

As the situation remains fluid with reports of the new regime going on the rampage, let’s hope the AU and ECOWAS are able to rein in one of their lawless, rebellious members and in so doing, allow peace to reign.

Martins Agbonlahor is a criminologist, journalist and author based in Manchester. His recent novel: Another Poor Cow – the Dangers of Tradition in Rural Nigeria, is available in Amazon and all online bookstores.

Man Cured Of Leprosy Calls For An End To The ‘L Word’, Including ‘From The Pulpit And In Political Soundbites’ 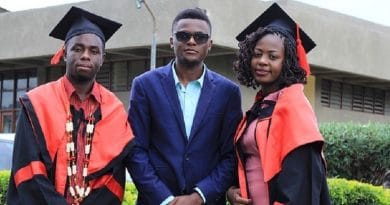 Persecution of Christians ‘growing in scale and intensity’