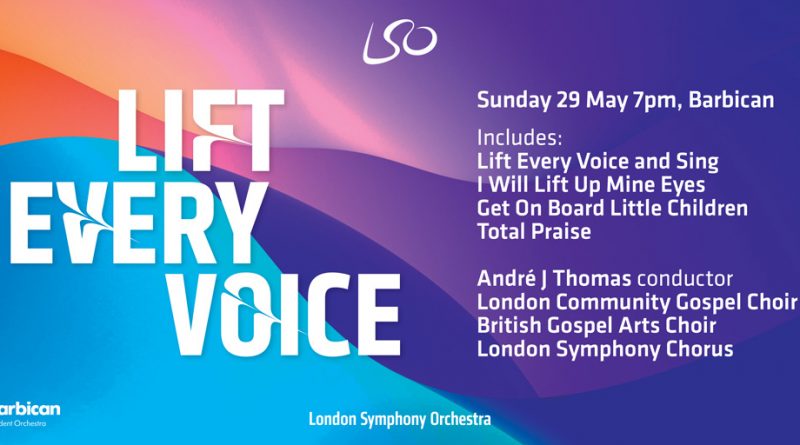 On Sunday 29 May at the Barbican, London, one of the world’s greatest experts in choral music unites the voices of gospel and community choirs from across London, in a concert of African-American gospel, spiritual and classical music to nourish the soul, together with the London Symphony Orhcestra.

André J Thomas leads the joyful celebration. His passion and knowledge for the hugely influential genre of gospel is profound, as his generosity to share that knowledge. He explains: ‘Gospel is about spreading the good news; it’s religious music. It started with the songs of the slaves, which are called spirituals and are often focussed on Old Testament stories such as Moses leading the slaves out of Egypt. Then a second type of spiritual was emerged, which was about Jesus; the third was about personal experience – you can tell those ones because they’re very individualised – for example, Swing Low Sweet Chariot, and Steal Away to Jesus.’

Symphonic gospel came about because the music needed to be shared in a larger form and outside of a church setting. Symphonic gospel music is called that simply because it involves the orchestra. This brings gospel music to a wider market of people rather than in the church only. It started in America at colleges and universities and then became regular repertoire for choral ensembles and was written so people who were not in the form could now participate.’

This month’s concert, curated by Thomas, includes powerful renditions of gospel music and spirituals including Lift Every Voice and Sing, I Will Lift Up Mine Eyes, Get On Board Little Children, and Total Praise. He brings together the massed voices of the London Community Gospel Choir, British Gospel Arts Choir, London Symphony Chorus, and LSO Community and Discovery Choirs, star soloists NaGuanda Nobles and Albert Lee, and the vibrant sound of the London Symphony Orchestra. As Thomas puts it: ‘when you sing this music … it’s about ministering to the soul’.

Thomas was recently announced as an LSO Associate Artist, which means he’ll be a regular fixture with the Orchestra in the coming years, bringing his distinct influences, quality, and style to the their concerts. He’ll be back conducting in Autumn, with another concert of symphonic gospel music in October, and a second of purely orchestral music by African-American composers Carlos Simon, Wynton Marsalis, and Joel Thompson in November.

Church Urban Fund Is Recruiting A Listening And Learning Officer