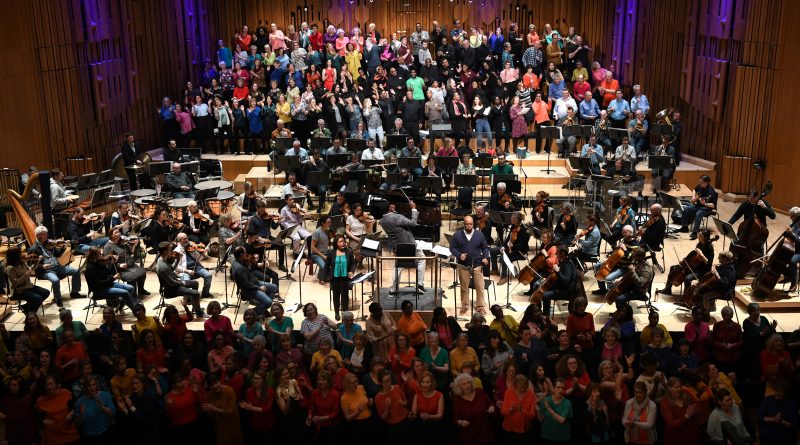 In anticipation of to his return at the Barbican with the London Symphony Orchestra on the 29 May 2022, Andre J Thomas tells Marlene Cato about his work, his upcoming concerts, and his love of Spiritual and Gospel music.

Three insights describe my interview with André J Thomas; a profound sense of humour, a deep love and passion for the gospel and spiritual music and finally, revealing unknown tenets about Black history and its relationships to Black music from before slavery to where we are in the present day.

At the interview, Thomas was a couple of weeks short of retiring from Yale University and ready to travel back to his hometown in Jacksonville, Florida, then from there, fly to London to prepare for his conducting the world-renown London Symphony Orchestra (LSO) in concert. It is to Andre J Thomas’s credit and his incredible work on spiritual and gospel music that he has been made an Associate Artiste with the London Symphony Orchestra and join the great line of conductors and composers that have worked with the LSO including Andre Previn and John Williams (composer of Star Wars, Raiders of the Lost Ark, and Superman). He has a three-year term with them bringing a sweet merge of hidden history and music back to life the spirituals, other works, and genres by Black composers and as well as his own compositions at The Barbican in London.

Growing up, as a child in a Baptist Church in the late 50s and 60s in a segregated Kanas Thomas did not always love the spirituals, in fact, he hated them! Until he met composer and actor, Jester Hairston who wrote one of gospel greats ‘Amen,’ Hairston set him straight about the music he had hated and as he thought it was designed ‘for White people to make fun of Black people.’ Thomas’s inspiration also comes from his mother, a coach cleaner and older sister who was a teacher of English and German in a white school, who would drop him off at his school every morning as he did not want to go to school where he was the only Black child in a school of 2,000 white students. He next went to a high school where there was only five Black students and one Black teacher, his sister, who did much to shape and influence his life. He then graduated and went to college and there met his mentor and developed a love and passion for the Spiritual songs and music.

The impact of the Spirituals like ‘Swing Low, Sweet Chariot’ and ‘Keep Your Lamps Trimmed and Burning’ had so much meaning. These songs were songs of resistance, hope, consolation, anticipation, and ways of communication, especially the secret coded messages of the underground freedom passages. Over the years, Thomas has conveyed this history through both words and the music to thousands of audiences and students throughout the world bringing understanding of their purpose and their importance in their own right and their foundation of music we hear today. Thomas has managed to keep these songs and music alive and studied across the major universities, music institutions and of course, he brings this genre of music to the masses. An accomplished musician and a specialist in not only the history to the Spirituals and Gospel music; he is a professor of choral and choir music, and skilful in the classics, blues, jazz to modern music. He has orchestrated music from the great American gospel artists such as Thomas Dorsey, Walter and Edwin Hawkins, Andre Crouch, and Richard Smallwood. Having been in the UK before, he worked with our own Ken Burton (Music Director, Songs of Praise) in a concert in Birmingham. Thomas has an air of anticipation and excitement to come back to UK.

What makes Thomas a great orator and lecturer as well as composer, conductor, musician, historian, choral and choir expert and the list goes on, is that his delivery of some of our shared and uncomfortable history of slavery and civil rights is gently tempered with humour and his speaking voice has a musical resonance that lifts and meanders like a brook, that can keep you listening and you would not notice time going by.

However, we are just scratching the surface of this extraordinary man and in the UK, we will be fortunate enough to have three years to develop a relationship with this Statesman, who can bring us Beethoven, Brahms, and Black classical composers such as Samuel Coleridge-Taylor or Black Brazilian composer, José MaurÍcio Nunes Garcia as well as his own works. We wait with expectation and I personally, would love to see a live performance of ‘I Dream A World’ such a beautiful composition and a ‘Mass: A Celebration of Love and Joy;’ is a top-level choral piece, is just like it says on the tin, it conjures up the feelings of celebration.

Give yourself a treat and see him in action at the Barbican with the London Symphony Orchestra with a collaboration of choirs including our own London Community Gospel Choir this Sunday 29 May. We are blessed that with his three-year association with the London Symphony Orchestra he will be returning to British shores for another concert on the 30 October and a couple of weeks later for a Black classical composers’ treat in November.