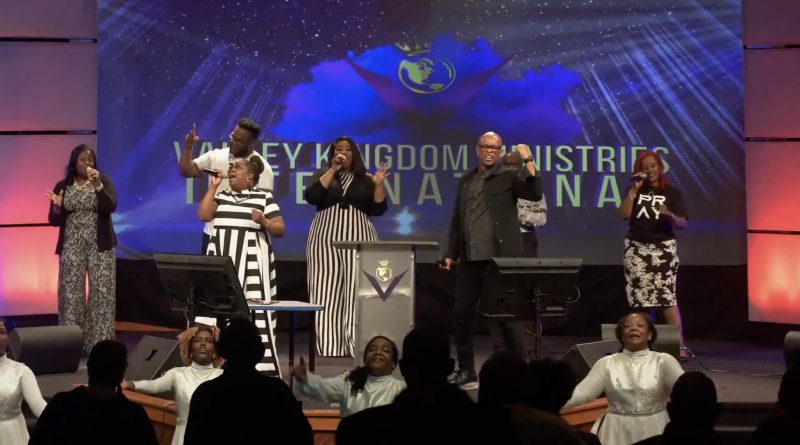 The platinum-selling praise and worship ensemble, Shekinah Glory Ministry, has teamed up with veteran drummer/producer Ray Bady, and newcomer, Jazmine Lynn Jones, on the inspiring track, “He Always Wins” (KCR Records).  It’s a big burst  of adrenaline similar in style to Shekinah Glory Ministry’s up-tempo congregational singalongs such as “We Magnify Your Name” and “Come On.” The track was written by Bady’s brother, Percy Bady, an esteemed songwriter known for writing songs such as the No. 1 hits “Do It Again” for Toni Braxton and “I Understand” for Smokie Norful. Link: https://smarturl.it/HeAlwaysWins

The collaboration comes at a time of transition for Shekinah Glory Ministry’s home church, Valley Kingdom Ministries International (VKMI).  The pastor, Apostle H. Daniel Wilson, has stepped down and appointed Ray Bady as the new leader. “For 38 Years, I have served as Senior Pastor of VKMI,” he says. “God is now preparing me for my next assignment, He has chosen Pastor Ray Bady to continue the work that’s taken place over the last few decades.”

We are excited about what God wants to do with this next chapter of our lives, the life of The Valley, and the surrounding community,

says Bady – a Chicago native who began his career as a drummer for the likes of Marvin Sapp and Yolanda Adams before launching a solo recording career in 2002. For the last decade, he’s been on the pastoral staff of Windsor Village Church in Houston, Texas.

For the last 20 years, Shekinah Glory Ministry has been  hailed as urban worship music  pioneers with five R.I.A.A.  gold and platinum certifications for projects featuring signature songs such as “Praise is What I Do,” “Jesus,” and “Yes.”    Shekinah Glory Ministry, Pastor Ray Bady, and Jazmine Lynn Jones will perform “He Always Wins” at an all-star concert on Friday, June 24, 2022, at the House of Hope Chicago, 752 E. 114th Street in Chicago. The program features some of the biggest names in gospel such as CeCe Winans, Marvin Sapp, and The Walls Group, among others. Admission is free, but attendees must register online at https://vkmi.swoogo.com/transitionexperience/begin

Cinque Cullar Bids Welcome To The King of Glory