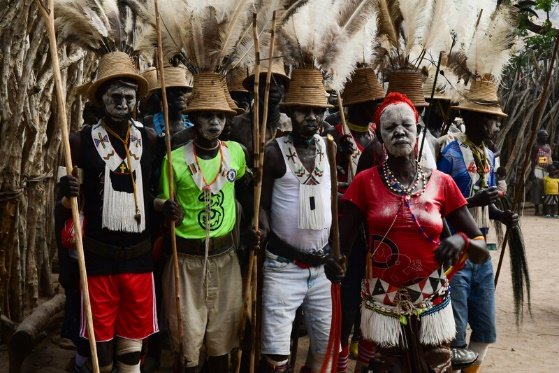 British humanitarian writer and photographer on life in South Sudan: the deadliest place to be an aid worker

“Chipping away at a big pot of need – sometimes you question what help really means.”

Former Hythe resident Jenny Davies has recently returned to the UK from her new home in Juba, South Sudan. She relocated in early 2019, moments before international borders closed due to Covid-19, and is reconnecting with family and friends across the South Coast and Scotland before returning to Juba at the end of June 2022.

Working as a Communications Officer gathering story material for Mission Aviation Fellowship [MAF] – the world’s largest humanitarian air service – Jenny has witnessed the realities of violence, displacement, and poverty, which have ravaged the country for decades.

South Sudan became independent in 2011 and is the world’s newest nation. Two periods of civil war (1955-1972 and 1983-2005) killed around 2.5 million people, mainly due to starvation and drought. The most recent conflict in 2013 erupted between forces loyal to President Salva Kiir and Vice President Riek Machar who are from different tribes. As a result, at least 3.7 million South Sudanese were displaced from their homes, 6 out of 10 being children.

Over 2.2 million are still in displacement camps mainly in Uganda, Ethiopia, and Sudan, and on some MAF flights, Jenny has witnessed the NGO community working to provide sustainable and long-term development solutions for these refugees.

Jenny describes the situation in South Sudan, as “fragile”, and in her home city of Juba where she lives on a walled compound with a 7 pm curfew, she never escapes poverty:

Yes, poverty is everywhere, and MAF can’t meet every need, so sometimes it’s overwhelming. The NGO community is doing a great job, but it’s like putting a bandage on an open wound. Take it off and it will just keep bleeding. Some days I do question if we are making a difference, but deep down I know that we are. We’re chipping away at a big pot of need.

MAF has been flying aid, medical care, and humanitarian assistance into the remotest parts of South Sudan for over 70 years. Partnering with over 200 NGOs based mainly in Juba, MAF has become a trusted form of transport where overland travel can be life-threatening due to the harsh climate, lack of roads, or risk of armed bandits.

In May 2022, the UN expressed concern about a return to civil war, but despite the threat of violence, Jenny says she has never felt scared:

“I hear horrific stories every day – for example that seven or eight women are admitted to hospital in Juba every day due to rape – but I’ve never personally experienced any threat. I’ve never felt scared, but the risks are not low in Juba. Living with a curfew is really hard but this city gets dangerous after dark – you can’t be too careful.”

Having lived in Juba for over three years, Jenny has discovered a unique strength among the South Sudanese people which she wants to communicate in her work.

She says: “Sometimes in my job, I feel like an outsider gazing in, but I want to honour these people and tell true stories, not just what the West wants to hear. No one wants their culture to be an example of failure – and South Sudan is full of potential. I want people to know that.

“What has surprised me most is how amazingly resilient people are. They have to deal with tough realities, but they do it with such grace. They live in conditions most of us would struggle with, but they keep on living. Like anyone, the South Sudanese have hopes and aspirations for their children – and those children have such beautiful smiles. I love the people, I love being part of a community in Juba and I love building relationships. Sometimes the most heartfelt thing you can do for someone is to go to a funeral with them. That shows you care – it’s the hard reality of life.”

Reflecting on the more humorous contrasts between living on the Kent coast and in a war-torn Arican capital, Jenny recalls a day where her and some colleagues decided to order a take-away:

“I volunteered to go and collect pizza for a big group of us – there were probably a dozen orders. But when I arrived to pick them up, the man behind the counter had stacked the pizzas up and squeezed them into a single box. It was like a pizza cake! I couldn’t bring myself to complain because I know he didn’t want to waste his pizza boxes. It made me smile because of course nothing like this would ever happen in England.”

Although development is slow in South Sudan, Radisson announced in May 2022 that it has opened the country’s first five-star hotel in Juba, which, according to Radisson’s Middle East and Africa boss Tim Cordon, will be “a great addition to help promote the country’s hospitality offering – where safety and security will be a top priority.”

As hospitality revives in Juba and across the world in the aftermath of the pandemic, Jenny admits that Covid has had both positive and negative impacts on the country:

“Handwashing stations across remote areas were irrelevant for Covid – but they have helped reduce diorama, which kills roughly 7,000 people every year in South Sudan. It’s hard to believe that it took a pandemic to bring soap and water to a community – but that’s what happened in isolated places.

“Health has improved in many ways as a result of Covid – but the impact on rural development projects such as education and farming has been devastating. MAF wasn’t able to fly passengers at the peak of lockdown, which meant aid workers couldn’t reach the most vulnerable places and many development projects ground to a halt. It shows how much NGOs rely on MAF to facilitate their work.”

Summing up her job satisfaction over the past three years, Jenny says: “People say really warm things about MAF, and they are grateful for our consistent service. I love what MAF does – it’s unique, it’s practical and it’s important. I love flying – and I’m looking forward to continuing this great work when I return to Juba – which I now call home.”

Why has the BAME community been so heavily impacted by COVID-19? Join the online conversation tomorrow