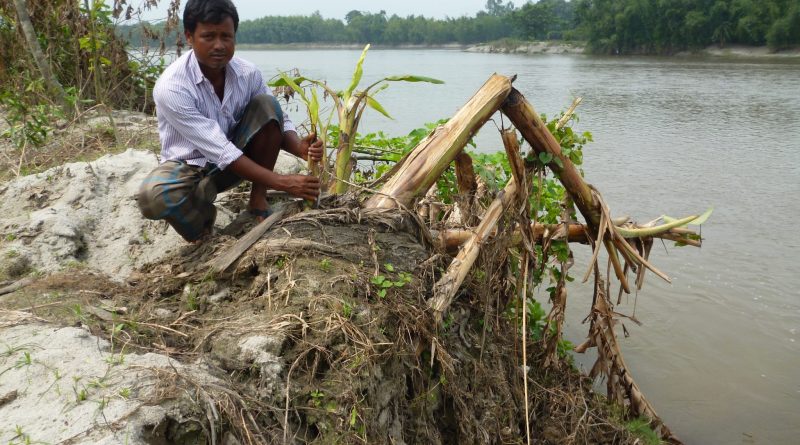 The Leprosy Mission will support vulnerable people rebuild their lives after flash flooding devastated the Sylhet district of Bangladesh.

The worst floods to hit the North of Bangladesh in more than a century are the latest in a string of climate exacerbated disasters. At least 68 people have died and millions are having to rebuild their lives after flash flooding submerged 72 percent of Sylhet division, as well as other northern communities.

Among those left in the most desperate situations are people living below the poverty line and communities affected by Neglected Tropical Diseases, which includes leprosy.

Two hundred people affected by leprosy in the Sylhet division that The Leprosy Mission is supporting through self-help groups (these empower and support livelihoods and healthcare) have been impacted by this week’s devastating floods.

James Pender is Environmental Advisor for The Leprosy Mission and previously lived in Bangladesh, working for the Church of Bangladesh. His job included the setting up of disaster management committees.

In terms of the impact of climate change, very few places in the world will experience the severity of changes that will occur in Bangladesh. This includes rising temperatures, flash flooding, more powerful cyclones, and rising sea levels displacing communities.

The impact is intensified by Bangladesh being one of the most populated and one of the poorest nations on earth.

Our project leaders across Bangladesh are working in communities where climate change is contributing to death and widespread destruction. As a result, people are plunged deeper into poverty and food insecurity.

It is a cruel truth that communities affected by Neglected Tropical Diseases, which include leprosy, are among the worst affected by climate exacerbated extreme weather events. It is also a cruel irony that while they have made a minimal contribution to climate change they are impacted the most.

James returned last month from the outskirts of the Sundarbans region in Southern Bangladesh where he visited a community that can no longer grow rice, vegetables, and fruit trees as a result of saline intrusion.

In the south, they used to farm freshwater fish in ponds but they have now become too salty. A rise in sea level, increasing cyclones and reduced winter riverwater flows, as a result of climate change, has resulted in saltwater intrusion and farmers are having to diversify.

There’s a concern that the number of leprosy cases will rise due to people migrating to the big cities like Dhaka as they no longer can work the land.

They move to overcrowded and poor conditions in the city slums. As a result, they are more susceptible to diseases like leprosy as their immune systems become weakened.

James said that it was through leprosy outreach camps in Dhaka that revealed people migrating to the city from the south, because of coastal erosion, were being treated for leprosy. This led to Leprosy Mission teams undertaking new outreach work in the south to find and cure people of leprosy. Dozens of new cases have been found and treated as a result.

It was in Satkhira in the south of Bangladesh where I met Bisawit who was cured of leprosy last year.

Bisawit told me that he bought his land 25 years ago. But following Cyclone Aila in 2009, the land became too salty and his crops failed and lemon tree died.

He’s had to diversify to shrimp and crab farming instead in order to feed himself. It is either a case of diversifying or to migrate to distant districts to work for on others’ farms as a day labourer.

Because of the late treatment of leprosy, he is no longer able to walk properly and needs to use a stick to get around.

He was visited by his nearest disaster management committee which includes in preparations; plans on how to evacuate people with disabilities to cyclone shelters in an emergency.

It is not easy though as Bisawit’s nearest cyclone shelter Is 5km away. So the plan is for him to be picked up by a rickshaw to take him to the shelter. But beforehand he must cross a river. He is unable to do this easily, as there is only a very narrow bamboo bridge which he can’t use because of his disability. So his only option is to swim across the river with help from a family member in rising waters and stormy weather which is an immense challenge.

Responding to climate change impacts is much harder for Bisawit and many other people affected by leprosy compared to their neighbours. As leprosy-related disability, stigma and marginalisation may add another layer onto the already almost insurmountable challenges they face from a changing climate and disaster events.

Bisawit Ray, 68, was treated for leprosy in 2021 and has been left disabled by the disease. He has been supported by The Leprosy Mission with ducklings, chickens, crabs, and shrimps so that he is able to earn enough to feed himself. Climate change is resulting in more natural disasters hitting Bangladesh. The lives of people like Bisawit, who is unable to cross this thin bamboo bridge, to reach his nearest cyclone shelter, are at the greatest risk.

About The Leprosy Mission England and Wales, the Channel Islands, and the Isle of Man:

The Leprosy Mission is an international Christian development organisation striving to defeat leprosy and transform lives. It serves people affected by leprosy, other neglected tropical diseases, and disability.

The England and Wales, the Channel Islands, and the Isle of Man office currently focuses its work in 10 countries where leprosy remains both chronic disease and a social challenge. These are: Bangladesh, Ethiopia, India, Mozambique, Myanmar, Nepal, Niger, Nigeria, Sri Lanka, and Sudan. Interventions are wide-ranging and holistic, not just addressing the disease itself but also ensuring social inclusion and quality of life. As well as medical work, areas of activity include housing, water, sanitation, education, employment, advocacy, and empowerment.