We never sin for free. There is always a cost. And counting that cost can make us less willing to follow our tempted hearts into spiritual danger.

The 17th-century Canons of Dort describe the price we pay for especially serious sins. By our sin we “greatly offend God, deserve the sentence of death, grieve the Holy Spirit, suspend the exercise of faith, severely wound the conscience, and sometimes lose the awareness of grace for a time” (5.5).

The authors of this confession aren’t rubbing salt into the wounds of those who have fallen. And they aren’t going soft on grace; the next article begins by emphasizing God’s rich mercy. Instead, as faithful shepherds, they are saying what you might find on a sign at the trailhead of a dangerous hike: “Failure to stay on the path will result in serious injury.” Reflecting on the manifold cost of sin can warn our souls against wandering from the safe path of faithfulness.

Here are the confession’s warnings.

God is beautifully able to be offended. He isn’t a stoic. He doesn’t oversee the world like a bored, disinterested manager. As a Father to his children, he is invested in us; he cares deeply about how we live.

We never sin for free. There is always a cost.

And God’s interest matters to his beloved children. With this conviction Joseph fought off the invitation to sleep with another man’s beautiful wife: “How then can I do this great wickedness and sin against God?” (Gen. 39:9). Faithful children will zealously resist offending a loving Father.

2. By our sin we “deserve the sentence of death.”

All sins—but especially outrageous ones—trigger in our souls the terrible announcement: “Cursed is everyone who does not continue in all things which are written in the book of the law, to do them” (Gal. 3:10).

When we sin, we become painfully aware of God’s verdict. “The soul who sins shall die” (Ezek. 18:4). “The wages of sin is death” (Rom. 6:23). Paul’s actual sin painfully reminded him that he lived in a body of death (Rom. 7:24). By rights he belonged on death row, waiting to be executed for his crimes against God. Sin doesn’t cancel God’s grace. But it does make us more conscious of our misery and desperate need for his rescuing mercy.

The Spirit is sensitive to sin; far more sensitive than we are. In Ephesians 4:30 Paul’s warning against grieving the Spirit isn’t connected to what most of us would call “heinous” sins. They are transgressions of speech and emotions, like bitterness, anger, and slander. But because of the Spirit’s purity—the holiness so suitable to his name—we terribly grieve him when we pollute our body, his home, with the sins he’s working to save us from.

4. By our sin we “suspend the exercise of faith.”

Jesus said to his disciples, who had given in to their fears and accused God of not caring about their plight, “Have you still no faith?” (Mark 4:35–41). He didn’t mean that they were no longer born again or that they had ceased to be united to him by a mysterious, Spirit-worked trust. He meant that their faith had become crippled, paralyzed.

Sin doesn’t destroy faith in God’s elect. But it can make faith impotent, leaving us feeling like we can no longer trust God, as if he is no longer for us.

5. By our sin we “severely wound the conscience.”

Peter wept bitterly when his conscience convicted him of denying Jesus (Luke 22:61–62). Even though Paul had persecuted the church prior to being born again, he was permanently scarred by his terrible crimes (1 Cor. 15:9).

Sin can be forgiven, but it isn’t always easy to forget. Troubled consciences can be a gift, leading us to repentance and faith. But sin can also dull our consciences, making us less sensitive to the Spirit’s conviction.

6. By our sin we “sometimes lose the awareness of grace for a time.”

Deliberate sin is a conscious rejection of grace. We shouldn’t be surprised when sin leaves us lost in fear and doubt, feeling like we have been cast away by a holy God. Jonah literally ran from God, flatly refusing his holy will. When God chastened him for his terrible sin, Jonah said, “I have been cast out of your sight” (Jonah 3:4).

Sin doesn’t destroy faith in God’s elect. But it can make faith impotent, leaving us feeling like we can no longer trust God, as if he is no longer for us.

Jonah had tried to flee “from the presence of the LORD” (1:3). He was so dead-set on disobeying God that he wanted God to let him go. But after the euphoria of his rebellion dissipated, he panicked. God no longer cares about me. It wasn’t true, but it felt true because of his sin. God’s smile can become hidden behind the dark cloud of our sin.

All sins, but especially what the Canons of Dort call “monstrous sins,” bring pain. This fact will sober and fortify spiritually reasonable people.

Still, terrible sins into which we are “sometimes . . . carried away” (5.4) need not keep us from God. The apostle Peter could not have imagined a worse sin than the one he committed against Jesus—he vehemently, persistently denied his dear friend and Savior. If sin could disqualify a believer from being a child of God, Peter’s would have.

But it didn’t. Peter owned his sin. He repented. And Jesus restored him to his service (John 21:15–19). When you start reaping the whirlwind of the sin you have sown (Hos. 8:7), remember that God is merciful. Own your sin and recommit to walking God’s path, believing that his fatherly face will again shine on you. Just don’t forget sin’s cost. 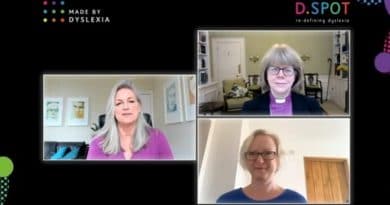 Bishop of London, takes part in new Made By Dyslexia podcast series