David Pearson, life-long Christian safeguarding champion and central figure in the development of the Independent Christian Safeguarding Charity Thirtyone:eight, has been awarded an MBE in the Queen’s New Year Honours list for services to safeguarding vulnerable people in the UK.

David, who was CEO of the charity (previously known as CCPAS) until his retirement in 2010, and then Company Secretary and a Trustee until 2019, was instrumental in founding the charity which at one point he ran from a caravan on his driveway but has now grown over the last 40 years to become the largest independent faith-based safeguarding charity in the UK with a team of over 50 people and engaging with a network of over 10,000 organisations nationally and internationally.

Known as a key campaigner for his work amongst faith communities, and as a tireless advocate for vulnerable people, David’s unshakeable faith and ability to build bridges has contributed significantly towards safeguarding being in the nation’s consciousness. For over fifty years David has been aconstant figure providing sound professional advice and support on a range of safeguarding and child protection issues to the Christian community and wider society.

On accepting his MBE David said

“I am honoured to accept this award on behalf of the exceptional people from whom I have learnt so much  – survivors of abuse who bravely shared their pain; the untiring efforts of leaders and workers with children and adults in churches and organisations; my Thirtyone:eight colleagues, over four decades since I birthed the charity; to my family who have stood and worked with me throughout and with thankfulness, above all else, to God.”

Born in 1945, in Gravesend, Kent, David left school at the age of fourteen with no formal qualifications but worked his way up to become Area Social Service Manager for Brixton, South London. There he learned first-hand about the need to engage with communities and the positive influence churches can be. However, David also often witnessed a breakdown in communication and understanding between churches and statutory agencies, which lead, in his words, to families and children “being lost in the middle.” With an understanding of both perspectives, David saw a need for bridge-building to bring about respect and understanding which would later inform the development of the charity.

“dreamed of a church that was ahead of the game, setting the standard in its measures to protect children and support all those affected by such horrific abuse and never seeking to defend the indefensible”.

Although that dream may still be some way off, the significant progress that has been made since David began his work is evident. In that time, we now see a significant proportion of churches implementing safeguarding procedures, churches being held to account for past and present failures, and the right attention being given to faith communities through the Independent Inquiry into Child Sexual Abuse in which Thirtyone:eight has been an active participant.

“David is an exceptionally mild-mannered and gracious man but nonetheless singularly determined to get things done for the purpose of safeguarding. It is no exaggeration to say that his work has changed the entire church landscape and that thanks to his work, literally many thousands of children in the UK are safer. I’m very pleased that the charity continues this vital work, and that his achievements in protecting vulnerable people in the UK are being justly recognised.”

During his career David also worked as a ‘Children’s Guardian’ representing the interests of children in Court proceedings and as a consultant to lawyers, social services and others on safeguarding issues. He has been called to advise government departments, as well as the Laming Inquiry (into the death of Victoria Climbie) in 2002. David has contributed to numerous pieces of national guidance as well as advising the Charity Commission in relation to safeguarding requirements for charities.

From being one of the first to draw attention to the dangers of internet safety, to highlighting a lack of training in theological colleges in the wake of the Victoria Climbie tragedy, to stressing the necessity of thorough vetting and checking following the conviction of Ian Huntley in 2004, often David has needed to take a brave stance, stand up to organisations, be vocal, and not bow to pressure in order to drive through a clear set of standards. However, he is also known as a moderating voice, bringing balance and common sense to often exaggerated or misunderstood issues. This is perhaps best seen in his speaking out about the role churches can play in supporting sex offenders, so that rather than rejecting them, they could be enabled, with the right support, to safely exist within the faith community.

“David has literally changed the landscape in terms of safeguarding within the faith community. He has engaged with disaffected individuals and groups and harnessed the positive influences that churches can have on communities. David leaves us a lasting legacy and a vision which clearly demonstrates what it means to follow God’s instruction to ‘speak out on behalf of the voiceless, and for the rights of all who are vulnerable’ (Proverbs 31:8). I firmly believe that there is no other person who has achieved what he has or has been involved for so long in the faithful pursuit of this cause. There are many people who will have heard of or who will have been positively impacted by the work he started all those years ago which continues to this day. We owe David a great debt of thanks.”

Behind the smile: ​You’ll never know what a smile can hide. By Paulette Monteiro 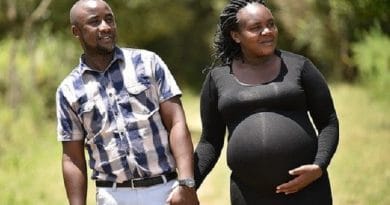